For other uses, see Uncia (disambiguation). 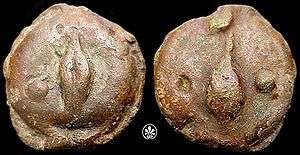 By derivation, it was also the name of a bronze coin valued at one-twelfth of an as produced during the Roman Republic.[1] The uncia started as a Roman-Oscan weight of about 23 grams for a 273 gram pound, with Attic weight issues of about 27 grams under the libral standard for a 327 gram pound and was produced occasionally towards the beginning of Roman cast bronze coinage. Obverse types of the uncia include a knucklebone (ca. 289–245 BC), a barleycorn (ca. 280–245 BC), and the helmeted bust of Roma (from ca. 240 BC).

In imperial times the uncia was briefly revived under Trajan (98–117) and Hadrian (117–138). This coin was about 11–14 mm in diameter and weighed about 0.8–1.2 grams. It featured the bust of the emperor on the obverse with no inscription and "SC" (for Senatu Consulto) in a wreath on the reverse. If this issue belonged to the imperial system, meaning it was not a provincial piece, it would be an uncia. This issue may have been made only for circulation in the East.

This article is issued from Wikipedia - version of the 10/8/2015. The text is available under the Creative Commons Attribution/Share Alike but additional terms may apply for the media files.