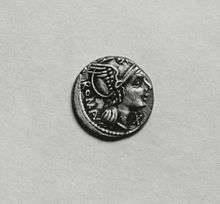 In ancient Roman religion, Roma was a female deity who personified the city of Rome and more broadly, the Roman state.[1] Her image appears on the base of the column of Antoninus Pius.

A helmeted figure on Roman coins of 280-276 and 265-242 BCE is sometimes interpreted as Roma but the identification is contestable.[2] Other early Roman coinage shows a warlike "Amazon" type, possibly Roma but more likely genius than dea. Ennius personified the "Roman fatherland" as Roma: for Cicero, she was the "Roman state", but neither of these are dea Roma.[3] Though her Roman ancestry is possible - perhaps merely her name and the ideas it evoked - she emerges as a Greek deity.

Roma in the Greek world

The earliest certain cult to dea Roma was established at Smyrna in 195 BCE, probably to mark Rome's successful alliance against Antiochus III.[4] Mellor has proposed her cult as a form of religio-political diplomacy which adjusted traditional Graeco-Eastern monarchic honours to Republican mores: honours addressed to the divine personification of the Roman state acknowledged the authority of its offices, Republic and city as divine and eternal.[5]

Democratic city-states such as Athens and Rhodes accepted Roma as analogous to their traditional cult personifications of the demos (ordinary people). In 189 BCE, Delphi and Lycia instituted festivals in her honour. Roma as "divine sponsor" of athletics and pan-Hellenic culture seems to have dovetailed neatly into a well-established and enthusiastic festival circuit, and temples to her were outnumbered by her civic statues and dedications.[6] In 133 BCE Attalus III bequeathed the people and territories of Pergamon to Rome, as to a trusted ally and protector. The Pergamene bequest became the new Roman province of Asia, and Roma's cult spread rapidly within it.[7]

In Hellenistic religious tradition, gods were served by priests and goddesses by priestesses but Roma's priesthood was male, perhaps in acknowledgment of the virility of Rome's military power. Priesthood of the Roma cult was competed among the highest ranking local elites.[8]

In contrast to her putative "Amazonian" Roman original, Greek coinage depicts Roma in the "dignified and rather severe style" of a Greek goddess, often wearing a mural crown, or sometimes a Phrygian helmet. She is occasionally bareheaded.[9] In this and later periods, she was often associated with Zeus (as guardian of oaths) and Fides (the personification of mutual trust).[10] Her Eastern cult appealed for Rome's loyalty and protection - there is no reason to suppose this as other than genuine (and diplomatically sound) respect. A panegyric to her survives, in five Sapphic stanzas attributed to Melinno.[11] In Republican Rome and its Eastern colonae her cult was virtually non-existent.[12]

The assassination of Julius Caesar led to his apotheosis and cult as a State divus in Rome and her Eastern colonies. Caesar's adopted heir Augustus ended Rome's civil war and became princeps ("leading man") of the Republic, and in 30/29 BCE, the koina of Asia and Bithynia requested permission to honour him as a living divus. Republican values held monarchy in contempt, and despised Hellenic honours - Caesar had fatally courted both - but an outright refusal might offend loyal provincials and allies. A cautious formula was drawn up: non-Romans could only offer him cult as divus jointly with dea Roma.[14]

Two temples were dedicated for the purpose. Roma was thus absorbed into the earliest (Eastern) form of "Imperial cult" - or, from an Eastern viewpoint, the cult to Augustus was grafted onto their time-honoured cult to Roma. From here on, she increasingly took the attributes of an Imperial or divine consort to the Imperial divus, but some Greek coin types show her as a seated or enthroned authority, and the Imperial divus standing upright as her supplicant or servant.[15][16]

The Imperial cult arose as a pragmatic and ingenious response to an Eastern initiative. It blended and "renewed" ancient elements of traditional religions and Republican government to create a common cultural framework for the unification of Empire as a Principate. In the West, this was a novelty, as the Gauls, Germans and Celts had no native precedent for ruler cult or a Roman-style administration.[17]

The foundation of the Imperial cult centre at Lugdunum introduced Roman models for provincial and municipal assemblies and government, a Romanised lifestyle, and an opportunity for local elites to enjoy the advantages of citizenship through election to Imperial cult priesthood, with an ara (altar) was dedicated to Roma and Augustus.[18] Thereafter, Roma is well attested by inscriptions and coinage throughout the Western provinces. Literary sources have little to say about her, but this may reflect her ubiquity rather than neglect: in the early Augustan era, she may have been honoured above her living Imperial consort.[19][20][21]

In the city of Rome itself, the earliest known state cult to dea Roma was combined with cult to Venus at the Hadrianic Temple of Venus and Roma. This was the largest temple in the city, probably dedicated to inaugurate the reformed festival of Parilia, which was known thereafter as the Romaea after the Eastern festival in Roma's honour. The temple contained the seated, Hellenised image of dea Roma - the Palladium in her right hand symbolised Rome's eternity.[23][24] In Rome, this was a novel realisation. Greek interpretations of Roma as a dignified deity had transformed her from a symbol of military dominance to one of Imperial protection and gravitas.

Roma's position could be more equivocal. Following the defeat of Clodius Albinus and his allies by Septimius Severus at Lugdunum, Roma was removed from the Lugdunum cult ara to the temple, where along with the Augusti she was co-opted into a new and repressive formulation of Imperial cult. Fishwick interprets the reformed rites at Lugdunum as those offered any paterfamilias by his slaves.[25] It is not known how long this phase lasted, but it appears to have been a unique development.

In a later, even more turbulent era, a common coin type of Probus shows him in the radiate solar crown of the Dominate: the reverse offers Rome's Temple of Venus and dea Roma. While Probus' image shows his monarchic Imperium, Roma displays his claims to restoration of Roman tradition and Imperial unity.[26]

"As personification, as goddess or as symbol, the name Roma stretches from classical Greece to Mussolini's Fascist propaganda... Roma has been seen as a goddess, a whore, a near-saint, and as the symbol of civilization itself. She remains the oldest continuous political-religious symbol in Western civilization." Ronald Mellor, Introduction, The goddess Roma.[27]