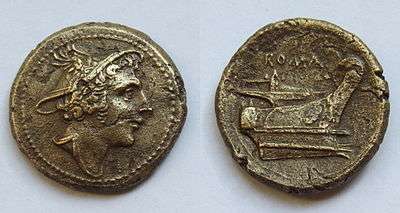 The semuncia (Latin half-ounce), symbol '𐆒', was an ancient Roman bronze coin valued at one-twenty-fourth of an as produced during the Roman Republic. It was made during the beginning of Roman cast bronze coinage as the lowest valued denomination. The most common obverse types were a head of Mercury or an acorn, and the most common reverse types were a prow or a caduceus.[1] It was issued until ca. 210 BC, at about the same time as the denarius was introduced.