In mathematics, a unit vector in a normed vector space is a vector (often a spatial vector) of length 1. A unit vector is often denoted by a lowercase letter with a circumflex, or "hat":

The same construct is used to specify spatial directions in 3D. As illustrated, each unique direction is equivalent numerically to a point on the unit sphere. 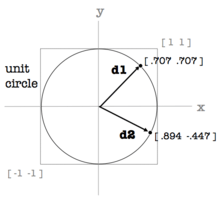 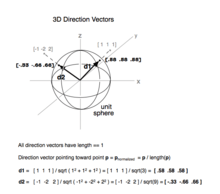 The normalized vector or versor û of a non-zero vector u is the unit vector in the direction of u, i.e.,

where ||u|| is the norm (or length) of u. The term normalized vector is sometimes used as a synonym for unit vector.

Unit vectors are often chosen to form the basis of a vector space. Every vector in the space may be written as a linear combination of unit vectors.

By definition, in a Euclidean space the dot product of two unit vectors is a scalar value amounting to the cosine of the smaller subtended angle. In three-dimensional Euclidean space, the cross product of two arbitrary unit vectors is a 3rd vector orthogonal to both of them having length equal to the sine of the smaller subtended angle. The normalized cross product corrects for this varying length, and yields the mutually orthogonal unit vector to the two inputs, applying the right-hand rule to resolve one of two possible directions.

They are sometimes referred to as the versors of the coordinate system, and they form a set of mutually orthogonal unit vectors, typically referred to as a standard basis in linear algebra.

They are often denoted using normal vector notation (e.g., i or

) are versors of a 3-D Cartesian coordinate system. The notations

, with or without hat, are also used, particularly in contexts where i, j, k might lead to confusion with another quantity (for instance with index symbols such as i, j, k, used to identify an element of a set or array or sequence of variables).

When a unit vector in space is expressed, with Cartesian notation, as a linear combination of i, j, k, its three scalar components can be referred to as direction cosines. The value of each component is equal to the cosine of the angle formed by the unit vector with the respective basis vector. This is one of the methods used to describe the orientation (angular position) of a straight line, segment of straight line, oriented axis, or segment of oriented axis (vector).

The three orthogonal unit vectors appropriate to cylindrical symmetry are:

They are related to the Cartesian basis

It is important to note that

, and are not constant in direction. When differentiating or integrating in cylindrical coordinates, these unit vectors themselves must also be operated on. For a more complete description, see Jacobian matrix. The derivatives with respect to

The unit vectors appropriate to spherical symmetry are:

, the direction in which the radial distance from the origin increases;

, the direction in which the angle in the x-y plane counterclockwise from the positive x-axis is increasing; and

, the direction in which the angle from the positive z axis is increasing. To minimize degeneracy, the polar angle is usually taken

. It is especially important to note the context of any ordered triplet written in spherical coordinates, as the roles of

are often reversed. Here, the American "physics" convention[1] is used. This leaves the azimuthal angle

defined the same as in cylindrical coordinates. The Cartesian relations are:

The spherical unit vectors depend on both

In general, a coordinate system may be uniquely specified using a number of linearly independent unit vectors

equal to the degrees of freedom of the space. For ordinary 3-space, these vectors may be denoted

. It is nearly always convenient to define the system to be orthonormal and right-handed: