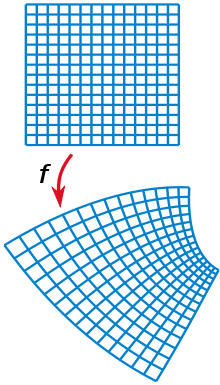 A conformal map acting on a rectangular grid. Note that the orthogonality of the curved grid is retained.

While vector operations and physical laws are normally easiest to derive in Cartesian coordinates, non-Cartesian orthogonal coordinates are often used instead for the solution of various problems, especially boundary value problems, such as those arising in field theories of quantum mechanics, fluid flow, electrodynamics and the diffusion of chemical species or heat.

Orthogonal coordinates never have off-diagonal terms in their metric tensor. In other words, the infinitesimal squared distance ds2 can always be written as a scaled sum of the squared infinitesimal coordinate displacements

equal the square roots of the diagonal components of the metric tensor, or the lengths of the local basis vectors

described below. These scaling functions hi are used to calculate differential operators in the new coordinates, e.g., the gradient, the Laplacian, the divergence and the curl.

A simple method for generating orthogonal coordinates systems in two dimensions is by a conformal mapping of a standard two-dimensional grid of Cartesian coordinates (x, y). A complex number z = x + iy can be formed from the real coordinates x and y, where i represents the square root of -1. Any holomorphic function w = f(z) with non-zero complex derivative will produce a conformal mapping; if the resulting complex number is written w = u + iv, then the curves of constant u and v intersect at right angles, just as the original lines of constant x and y did.

These basis vectors are by definition the tangent vectors of the curves obtained by varying one coordinate, keeping the others fixed: 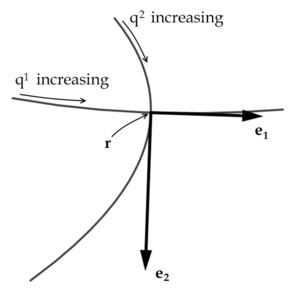 Visualization of 2D orthogonal coordinates. Curves obtained by holding all but one coordinate constant are shown, along with basis vectors. Note that the basis vectors aren't of equal length: they need not be, they only need to be orthogonal.

where r is some point and qi is the coordinate for which the basis vector is extracted. In other words, a curve is obtained by fixing all but one coordinate; the unfixed coordinate is varied as in a parametric curve, and the derivative of the curve with respect to the parameter (the varying coordinate) is the basis vector for that coordinate.

Note that the vectors are not necessarily of equal length. The useful functions known as scale factors of the coordinates are simply the lengths

of the basis vectors

(see table below). The scale factors are sometimes called Lamé coefficients, but this terminology is best avoided since some more well known coefficients in linear elasticity carry the same name.

The normalized basis vectors are notated with a hat and obtained by dividing by the length:

this follows from the fact that, by definition,

, using the Kronecker delta. Note that:

We now face three different basis sets commonly used to describe vectors in orthogonal coordinates: the covariant basis ei, the contravariant basis ei, and the normalized basis êi. While a vector is an objective quantity, meaning its identity is independent of any coordinate system, the components of a vector depend on what basis the vector is represented in.

Vector addition and negation are done component-wise just as in Cartesian coordinates with no complication. Extra considerations may be necessary for other vector operations.

Note however, that all of these operations assume that two vectors in a vector field are bound to the same point (in other words, the tails of vectors coincide). Since basis vectors generally vary in orthogonal coordinates, if two vectors are added whose components are calculated at different points in space, the different basis vectors require consideration.

The dot product in Cartesian coordinates (Euclidean space with an orthonormal basis set) is simply the sum of the products of components. In orthogonal coordinates, the dot product of two vectors x and y takes this familiar form when the components of the vectors are calculated in the normalized basis:

This is an immediate consequence of the fact that the normalized basis at some point can form a Cartesian coordinate system: the basis set is orthonormal.

For components in the covariant or contravariant bases,

This can be readily derived by writing out the vectors in component form, normalizing the basis vectors, and taking the dot product. For example, in 2D:

where the fact that the normalized covariant and contravariant bases are equal has been used.

The cross product in 3D Cartesian coordinates is:

The above formula then remains valid in orthogonal coordinates if the components are calculated in the normalized basis.

To construct the cross product in orthogonal coordinates with covariant or contravariant bases we again must simply normalize the basis vectors, for example:

which, written expanded out,

Terse notation for the cross product, which simplifies generalization to non-orthogonal coordinates and higher dimensions, is possible with the Levi-Civita tensor, which will have components other than zeros and ones if the scale factors are not all equal to one.

Looking at an infinitesimal displacement from some point, it's apparent that

By definition, the gradient of a function must satisfy (this definition remains true if ƒ is any tensor)

It follows then that del operator must be:

and this happens to remain true in general curvilinear coordinates. Quantities like the gradient and Laplacian follow through proper application of this operator.

From dr and normalized basis vectors êi, the following can be constructed.[3][4]

Using the line element shown above, the line integral along a path

of a vector F is:

An infinitesimal element of area for a surface described by holding one coordinate qk constant is:

Similarly, the volume element is:

where the large symbol Π (capital Pi) indicates a product the same way that a large Σ indicates summation. Note that the product of all the scale factors is the Jacobian determinant.

As an example, the surface integral of a vector function F over a q1 = constant surface

Note that F1/h1 is the component of F normal to the surface.

Since these operations are common in application, all vector components in this section are presented with respect to the normalised basis:

The above expressions can be written in a more compact form using the Levi-Civita symbol, defining

, and assuming summation over repeated indices:

Besides the usual cartesian coordinates, several others are tabulated below.[5] Interval notation is used for compactness in the coordinates column.