The United Progressive Alliance (UPA) is a coalition of centre-left political parties in India formed after the 2004 general election.[1] One of the members of UPA is Indian National Congress, whose president Sonia Gandhi is also the chairperson of the UPA. 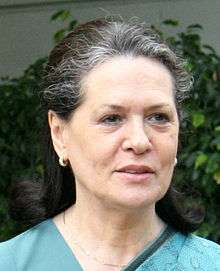 The UPA was formed soon after the 2004 general elections when it had become clear that no party had won an absolute majority. The hitherto ruling Bharatiya Janata Party-led National Democratic Alliance (NDA) had won 169 seats[2] in the 543-member 14th Lok Sabha, as opposed the UPA's tally of 222 seats.

The Left Front with 59 MPs (excluding the speaker of the Lok Sabha), the Samajwadi Party with 39 MPs and the Bahujan Samaj Party with 19 MPs were other significant blocks that opted to support UPA at various phases of its rule.[3][4] The UPA did not enjoy a simple majority on its own in the parliament, rather it has relied on the external support to ensure that it enjoys the confidence of the Indian parliament similar to the formula adopted by the previous minority governments of the United Front, the NDA, the Congress government of P. V. Narasimha Rao, and earlier governments of V. P. Singh and Chandra Shekhar.

An informal alliance had existed prior to the elections as several of the current constituent parties had developed seat-sharing agreements in many states. However, it was only after the election that the results of negotiations between parties were announced. The UPA government's policies were initially guided by a common minimum programme that the alliance hammered out with fruitful consultations with Jyoti Basu and Harkishan Singh Surjeet of the 59-member Left Front.[5] Hence, government policies were generally perceived as centre-left, reflecting the centrist policies of the INC. The congress party is today more closely aligned with the neoliberalism, strongly advocates social democracy and social liberalism.

During the tenure of Jharkhand Chief Minister Madhu Koda, the constituents of the UPA were, by mutual consent, supporting his government.[6]

On 22 July 2008, the UPA narrowly survived a vote of confidence in the parliament brought on by the Left Front withdrawing their support in protest at the India–United States Civil Nuclear Agreement.[7] The Congress party and its leaders along with then SP leader Amar Singh were accused for cash for vote scam (see: Cash-for-votes scandal) in which they were accused for buying votes in Lok Sabha to save the government. The enquiry is still going on for the same...[8][9][10] In the Indian General Election in 2009, the UPA won 262 seats, of which the INC accounted for 206.

Initially, UPA was given external support from the Left Front which totalled 59 MPs. Similar external support was also promised by several smaller parties that were not a member of any coalition, including the Samajwadi Party with 39 MPs, the All India Anna Dravida Munnetra Kazhagam party with 4 MPs, the Janata Dal (Secular) with 3 MPs, and Bahujan Samaj Party with 19 MPs, who promised to support the government if it faced a vote of confidence. Nevertheless, these parties were not a part of the government. The UPA thus had at least 335 MPs out of 543 supporting it at the time of its formation.

The Left parties, despite ideological differences with the Congress, supported the UPA to ensure a secular government.[23]

The Telangana Rashtra Samithi (TRS) was the first party to quit the alliance, first when its ministers quit the Andhra Pradesh government, and finally when an official withdrawal was done at the national level by its president K. Chandrashekar Rao, who resigned his Lok Sabha seat.[24]

On 21 June 2008, the Bahujan Samaj Party, or the BSP, with 18 seats, announced withdrawal of its support after the Congress starting opposing the UP government where the BSP was the ruling party. Their leader Mayawati said that she wouldn't enter an electoral alliance with either the Congress or the BJP. She also accused both parties of misusing the Central Bureau of Investigation or the CBI and attempting to implicate her in the Taj Corridor Case. She also accused Congress of making false promises to help the people of Bundelkhand and Poorvanchal regions as they were suffering from drought.

On 8 July 2008, Prakash Karat, the general secretary of the Communist Party of India (Marxist) (CPI (M)), announced that the Left Front would be withdrawing support over the decision by the government to go ahead with the Indo-US nuclear deal, a Section 123 Agreement with the United States.[13]

On 4 January 2009, Mehbooba Mufti, president of the People's Democratic Party announced the withdrawal of the PDP from the UPA given that the Congress had decided to support the Omar Abdullah-led National Conference Government in Jammu & Kashmir after the 2008 state elections.[25]

On 26 March 2009,PMK declared that it would join the AIADMK led front and withdrew from the UPA and the party president declared that two union ministers of his party will resign shortly.

On 12 November 2012, Barrister Asaduddin Owaisi, leader of the AIMIM announced the decision of the party's executive and declared that his party would now go after the state government for its "communal" and "anti-people" policies. Addressing a news conference, Owaisi said his party was compelled to take the decision due to "the communal behaviour of Kiran Kumar Reddy's government in Andhra Pradesh". Giving a detailed account of communal riots in the state and Hyderabad since 2010, he alleged that the Congress government not only turned a blind eye to MIM's demands to withdraw cases against innocent Muslims and take action against the guilty but pandered to the Sangh Parivar. The MIM's decision came after the government allegedly allowed construction of a canopy over a temple abutting the historic Charminar in alleged violation of court orders to maintain status quo. Owaisi criticised the chief minister for ignoring the high court order to maintain status quo.[15][16]

On 18 September 2012, TMC Chief, Mamata Banerjee, announced her decision to withdraw support to the UPA after the TMC's demands of rollback of reforms including FDI in retail, increase in the price of diesel and limiting the number of subsidised cooking gas cylinders for households, were not met.[17][18]

On 1 October 2012 the Jharkhand Vikas Morcha, led by Babulal Marandi, withdrew the support of its two MPs to the UPA government. The JVM was part of the UPA. Though this did not impact the stability of the government, the JVM's withdrawal of support came two weeks after a major UPA ally, the Trinamool Congress, pulled out of the alliance.

The reason for JVM's withdrawal was the same as the Trinamool's; against the decision to implement 51% FDI in Retail Businesses and the Hike in Diesel Prices.

On 17 October 2012 14 DMK MPs, including central ministers T.R. Baalu and A. Raja were forced to hand in their post-dated resignation letters to the head of the party, due to Spectrum corruption Scandal. The party leader M. K. Karunanithi's daughter Kanimozhi executed the 2G scandal with then Information Technology minister Andimuthu Raja and caused billions of rupees of loss to Government of India. During the investigation, they found a huge sum of money has been exchanged to DMK party leader Karunanithi's wives' TV channel.

The DMK rejoins alliance with Congress [26]

Past general election alliances of Congress (before 2004)

During the discussion for the vote of confidence, BJP MPs produced cash in the parliament, as viewed on Lok Sabha TV, alleging a bribe by the Samajwadi Party to vote for the government. The BJP claimed to have documentary evidence in a "cash for vote" scam and submitted a report before the parliamentary committee probing the matter. The BJP also wrote a 17-page letter to the Parliamentary committee headed by Congress member V Kishore Chandradeo in this regard. Arun Jaitley said Samajwadi MP Reoti Raman Singh had offered his party's MPs the cash on the night of 21 July. He also alleged that SP leader Amar Singh was behind the entire episode. Jaitley said: "The investigating agencies did not do their job. So we inquired into the matter and gathered documentary evidence in the case." He alleged the 'cash for vote' scam reflected the subversion of the Indian Parliament, as well as a section of the media.[27]

The winter session of parliament in October 2008 came under intense criticism from the Left parties and the BJP to demand a full-fledged winter session instead of what was seen as the UPA to having "scuttled the voice of Parliament" by bringing down the sittings to a record low of 30 days in the year. The tensions between the UPA and the opposition parties became evident at an all-party meeting convened by Lok Sabha speaker Somnath Chatterjee when the leader of opposition, LK Advani questioned the status, timing and schedule of the current session of parliament.[28]

Karunanidhi had said he felt "let down" by the "lukewarm" response of the Centre and had demanded amendments in the resolution on Sri Lanka.

One of the amendments was to "declare that genocide and war crimes had been committed and inflicted on the Eelam Tamils by the Sri Lankan Army and the administrators".

The UPA has also been criticised for its alleged involvement in a number of scams such as the Commonwealth Games Scam of 2010, the 2G scam, and the Coalgate scam. Apart from the above-mentioned scams, the UPA has been under intense fire for the alleged doles handed out to the son-in-law of the Gandhi family, Robert Vadra, by different state governments run by the UPA.[30]