The National Democratic Alliance (NDA, Hindi: राष्ट्रीय जनतांत्रिक गठबंधन) is a centre-right[1] coalition of political parties in India. At the time of its formation in 1998, it was led by the Bharatiya Janata Party (BJP) and had thirteen constituent parties. Its honorary chairman is former prime minister Atal Bihari Vajpayee. Also representing the alliance are L. K. Advani, former deputy prime minister, who is the acting chairman of the Alliance, Narendra Modi, current Prime Minister of India and Leader of the House in Lok Sabha; and Arun Jaitley, Leader of the House in the Rajya Sabha. The coalition was in power from 1998 to 2004. The alliance returned to power in the April–May 2014 election with a combined vote share of 38.5%.[2] Its leader, Narendra Modi, was sworn in as Prime Minister of India on 26 May 2014. 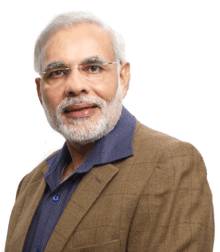 The National Democratic Alliance was formed in May 1998 as a coalition to contest the general elections. It was led by the Bharatiya Janata Party, and included several regional parties, including the Samta Party and the All India Anna Dravida Munnetra Kazhagam (AIADMK), as well as Shiv Sena, the only member which shared the Hindutva ideology of the BJP.[3][4] With outside support provided by the Telugu Desam Party (TDP), the NDA was able to muster a slim majority in the elections of 1998, and Atal Bihari Vajpayee returned as prime minister.[5] The government collapsed within a year because the (AIADMK) withdrew its support. After the entry of a few more regional parties, the NDA proceeded to win the 1999 elections with a larger majority. Vajpayee became prime minister for a third time, this time for a full five-year term.[6]

The NDA called elections in early 2004, six months ahead of schedule. Its campaign was based around the slogan of "India Shining" which attempted to depict the NDA government as responsible for a rapid economic transformation of the country. However, the NDA unexpectedly suffered a heavy defeat, winning only a 186 seats in the Lok Sabha, compared to the 222 of the United Progressive Alliance led by the Congress, with Manmohan Singh succeeding Vajpayee as prime minister. Some commentators have stated that the NDA's failure to reach out to rural Indians was the explanation for its defeat; others have pointed to its "divisive" policy agenda as the reason.[7][8]

The National Democratic Alliance does not have a formal governing structure in place, such as an executive board or politburo. It has been up to the leaders of the individual parties to make decisions on issues such as sharing of seats in elections, allocation of ministries and the issues that are raised in Parliament. Given the varied ideologies among the parties, there have been many cases of disagreement and split voting among the allies. Owing to ill health, George Fernandes, who was the NDA convener until 2008, was discharged of his responsibility and replaced by Sharad Yadav, the national president of the Janata Dal(United) political party. On 16 June 2013, the JD(U) left the coalition and Sharad Yadav resigned from the role of the NDA convener.[9]

Present Members and Seats in Parliament

As of May 2016, the BJP holds a majority of assembly in 9 states: Gujarat, Madhya Pradesh, Chhattisgarh, Rajasthan, Goa, Haryana, Maharashtra, Assam and Jharkhand. In 6 other states – Punjab, Nagaland, Jammu & Kashmir, Andhra Pradesh, Arunachal Pradesh respectively – it shares power with other political parties of the NDA coalition. The BJP has previously been the sole party in power in Uttar Pradesh, Uttarakhand, Himachal Pradesh, Karnataka, and Delhi. It has also ruled Odisha, and Bihar as part of coalition governments.[25] In 2014 Jammu and Kashmir Legislative Assembly elections, BJP emerged as 2nd largest party by winning 25 seats and largest party by vote share of 23%.[26]

^ BJP had fielded 427 candidates on 427 seats out of 543 but nomination of BJP candidate S. Gurumoorthy was rejected from Niligiris for failing to submit mandatory forms during his nomination.[58][59][60][61][62][63] (#) NPP, NPF and MNF are contesting in each Seats & Other 8 Members supporting NDA Candidates

NDA nominated P. A. Sangma as its presidential candidate who lost against UPA's Pranab Mukherjee.

Jaswant Singh was named as the candidate for the post of Vice-President against UPA's Hamid Ansari. Ansari won his second term in office.[69]

On 13 September 2013, Narendra Modi declared as PM candidate for 2014 Elections

DMDK will be fighting Lok Sabha Election through an alliance with BJP led NDA.[77] MDMK, PMK led Social Democratic Alliance are the other allies of NDA in Tamil Nadu.

All India NR Congress (AINRC) formally joined NDA on 13 March 2014 and will be contesting in Puducherry Lok Sabha constituency.[13]

Shiv Sena Though Shiv Sena has quit Mahayuti in Maharashtra, before Maharashtra Legislative Assembly Elections 2014, but has decided to remain with NDA at the Centre.[79]

Bharatiya Janata Party on Friday, February 27, 2015 clinched an alliance with People's Democratic Party for Government Formation in Jammu & Kashmir under which its CM will be from PDP in the state.[81]

In January 2016, Bharatiya Janata Party clinched an alliance with Bodoland People's Front in Assam for its upcoming state elections in Assam.[82]

Following BJP's victory in the Assam Legislative Assembly Elections 2016, the party formed an alliance of like-minded non-Congress parties in the Northeast, called the North-East Democratic Alliance, consisting of 11 regional parties of Northeast India. Himanta Biswa Sarma, BJP leader from Assam has been appointed Convenor of the regional alliance.