Politics in India take place within the framework of its constitution, as India is a federal parliamentary democratic republic, in which the President of India is the head of the country and the Prime Minister of India is the head of the government. India follows the dual polity system, i.e. a double government which consists of the central authority at the center and states at the periphery. The constitution defines the organization powers and limitations of both central and state governments, and it is well-recognized, rigid and considered supreme; i.e. laws of the nation must conform to it.

There is a provision for a bicameral Union legislature consisting of an Upper House, i.e. Rajya Sabha, which represents the states of the Indian federation and a lower house i.e. Lok Sabha, which represents the people of India as a whole. The Indian constitution provides for an independent Judiciary which is headed by the Supreme Court. The court's mandate is to protect the constitution, to settle disputes between the central government and the states, inter-state disputes, to nullify any central or state laws that go against the constitution and protect fundamental rights of citizens, issuing writs or their enforcement, in case of violation.[1]

The governments, union or state, are formed through elections held every five years (unless otherwise specified), by parties that claim a majority of members in their respective lower houses (Lok Sabha in centre and Vidhan Sabha in states). India had its first general election in 1951, which was won by the Indian National Congress, a political party that went on to dominate the successive elections up until 1977, when the first non-Congress government was formed for the first time in independent India. The 1990s saw the end of single party domination and rise of coalition governments. The elections for the 16th Lok Sabha, held from April 2014 to May 2014, once again brought back single-party rule in the country, with the Bharatiya Janata Party being able to claim a majority in the Lok Sabha.[2]

In recent decades, Indian politics has become a dynastic affair. Possible reasons for this could be the absence of party organizations, independent civil society associations that mobilize support for the parties, and centralized financing of elections.[3]

Compared to other democratic countries, India has a large number of political parties. It has been estimated that over 200 parties were formed after India became independent in 1947.[4]

There are many types of political parties in India - National Party and Regional/State party. Every political party must bear a symbol and must be registered with the Election Commission of India. Symbols are used in Indian political system as an identity of political parties and that illiterate people can also vote by recognizing symbols of party.

In the current amendment to the Symbols Order, the Commission, has infused the following five principles, which, in its view, should govern the polity in the country, situate as it is in its present state:[5]

OR it wins at least two percent (2%) seats in the House of the People (i.e., 11 seats in the existing House having 543 members), and these members are elected from at least three different States.

At present there are 5 national parties and many more state parties.

India has a history of alliances and breakdown of alliances. However, there are three alliances on a national level in India, competing with each other for the position of Government. The member parties work in harmony for gratifying national interests, although a party can jump ships whenever it may deem fit.

Panchayati Raj Institutions or Local self-government bodies play a crucial role in Indian Politics, as it focuses on grass-level administration in India.

The Act aims to provide 3-tier system of Panchayati Raj for all States having population of over 2 million, to hold Panchayat elections regularly every 5 years, to provide reservation of seats for Scheduled Castes, Scheduled Tribes and Women, to appoint State Finance Commission to make recommendations as regards the financial powers of the Panchayats and to constitute District Planning Committee to prepare draft development plan for the district. 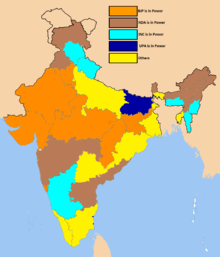 Indian state governments led by various political parties as of May 2016.

India has a multi-party system, where there are a number of national as well as regional parties. A regional party may gain a majority and rule a particular state. If a party is represented in more than 4 states, it would be labelled a national party. Out of the 66 years of India's independence, India has been ruled by the Indian National Congress (INC) for 53 of those years, as of March 2014.

The party enjoyed a parliamentary majority save for two brief periods during the 1970s and late 1980s. This rule was interrupted between 1977 and 1980, when the Janata Party coalition won the election owing to public discontent with the controversial state of emergency declared by the then Prime Minister Indira Gandhi. The Janata Dal won elections in 1989, but its government managed to hold on to power for only two years.

Between 1996 and 1998, there was a period of political flux with the government being formed first by the nationalist Bharatiya Janata Party (BJP) followed by a left-leaning United Front coalition. In 1998, the BJP formed the National Democratic Alliance with smaller regional parties, and became the first non-INC and coalition government to complete a full five-year term. The 2004 Indian elections saw the INC winning the largest number of seats to form a government leading the United Progressive Alliance, and supported by left-parties and those opposed to the BJP.

On 22 May 2004, Manmohan Singh [6] was appointed the Prime Minister of India following the victory of the INC & the left front in the 2004 Lok Sabha election. The UPA ruled India without the support of the left front. Previously, Atal Bihari Vajpayee [7] had taken office in October 1999 after a general election in which a BJP-led coalition of 13 parties called the National Democratic Alliance emerged with a majority. In May 2014, Narendra Modi of BJP was elected as Prime Minister of India.

The lack of homogeneity in the Indian population causes division between different sections of the people based on religion, region, language, caste and race. This has led to the rise of political parties with agendas catering to one or a mix of these groups. Parties in India also target people who are not in favour of other parties and use them as an asset.

Some parties openly profess their focus on a particular group; for example, the Dravida Munnetra Kazhagam's and the All India Anna Dravida Munnetra Kazhagam's focus on the Dravidian population, and the Shiv Sena's pro-Marathi agenda. Some other parties claim to be universal in nature, but tend to draw support from particular sections of the population. For example, the Rashtriya Janata Dal (translated as National People's Party) has a vote bank among the Yadav and Muslim population of Bihar and the All India Trinamool Congress does not have any significant support outside West Bengal.

The narrow focus and votebank politics of most parties, even in the central government and central legislature, sidelines national issues such as economic welfare and national security. Moreover, internal security is also threatened as incidences of political parties instigating and leading violence between two opposing groups of people is a frequent occurrence.

Economic issues like poverty, unemployment, development are main issues that influence politics. Garibi hatao (eradicate poverty) has been a slogan of the Indian National Congress for a long time. The well known Bharatiya Janata Party(BJP) encourages a free market economy. The Communist Party of India (Marxist) vehemently supports left-wing politics like land-for-all, right to work and strongly opposes neo-liberal policies such as globalisation, capitalism and privatisation.

Terrorism, Naxalism, religious violence and caste-related violence are important issues that affect the political environment of the Indian nation. Stringent anti-terror legislation such as TADA, POTA and MCOCA have received much political attention, both in favour and opposed.

Terrorism had effected politics India since its conception, be it the terrorism supported from Pakistan or the internal guerrilla groups such as Naxalites. In 1991 the former prime minister Rajiv Gandhi was assassinated during an election campaign.[8] The suicide bomber was later linked to the Sri Lankan terrorist group Liberation Tigers of Tamil Eelam, as it was later revealed the killing was an act of vengeance for Rajiv Gandhi sending troops in Sri Lanka against them in 1987.[8]

The Babri Masjid demolition on December 6, 1992 by Hindu Karsevaks resulted in nationwide communal riots in two months, with worst occurring in Mumbai with at least 900 dead.[8][9] The riots were followed by 1993 Mumbai Bomb Blasts, which resulted in more deaths.

Law and order issues, such as action against organised crime are issues which do not affect the outcomes of elections. On the other hand, there is a criminal–politician nexus. Many elected legislators have criminal cases against them. In July 2008, the Washington Post reported that nearly a fourth of the 540 Indian Parliament members faced criminal charges, "including human trafficking, child prostitution immigration rackets, embezzlement, rape and even murder".[10]

The Constitution of India lays down that the Head of State and Union Executive is the President of India. S/He is elected for a five-year term by an electoral college consisting of members of both Houses of Parliament and members of legislative assemblies of the states. The President is re-eligible for elections; however, in India's independent history, only one president has been re-elected till now - Rajendra Prasad.

The President appoints the Prime Minister of India from the party or coalition which commands maximum support of the Lok Sabha, on whose recommendation he/she nominates the other ministers. The President also appoints judges of the Supreme Court and High Court. It is on the President's recommendation that the Houses of Parliament meet, and only the president has the power to dissolve the Lok Sabha. Furthermore, no bill passed by Parliament can become law without the president's assent.

The Office of the Vice-President of India is constitutionally the second most senior office in the country, after the President. The vice-president is also elected by an electoral college, consisting of members of both houses of parliament.

The Prime Minister and the Union Council of Ministers

The Union Council of Ministers, headed by the Prime Minister, is the body with which the real executive power resides. The Prime Minister is the recognized head of the government.

India has a federal form of government, and hence each state also has its own government. The executive of each state is the Governor (equivalent to the president of India), whose role is ceremonial. The real power resides with the Chief Minister (equivalent to the Prime Minister) and the state council of ministers. States may either have a unicameral or bicameral legislature, varying from state to state. The Chief Minister and other state ministers are also members of the legislature.

In recent decades, Indian politics has become a dynastic affair. The reasons for this state of affair could be the absence of a party organization, independent civil society associations that mobilize support for the party, and centralized financing of elections.[3] This phenomenon is seen both at the national level as well as the state level. One example of dynastic politics has been the Nehru–Gandhi family which produced three Indian prime ministers as well as leading the Congress party.[11] At state level too, a number of political parties are led by family members of the previous leaders. For example, Akhilesh Yadav, the chief minister of UP is the son Mulayam singh Yadav who held that position before.