The United States Army Nurse Corps (AN or ANC) was formally established by the U.S. Congress in 1901. It is one of the six medical special branches (or "corps") of officers which – along with medical enlisted soldiers – comprise the Army Medical Department (AMEDD).

The ANC is the nursing service for the U.S. Army and provides highly qualified nursing staff in support of the Department of Defense medical plans. This ANC is composed entirely of registered nurses (RNs).

All actions and tasks must lead and work toward promoting the wellness of Warriors and their families, supporting the delivery of Warrior and family healthcare, and all those entrusted to our care and ultimately, positioning the Army Nurse Corps as a force multiplier for the future of military medicine.

I am a member of the Army Nursing Team


My patients depend on me and trust me to provide compassionate and proficient care always.
I nurture the most helpless and vulnerable and offer courage and hope to those in despair.
I protect the dignity of every individual put in my charge.

I tend to the physical and psychological wounds of our Warriors and support the health, safety, and welfare of every retired Veteran.
I am an advocate for family members who support and sustain their Soldier during times of War.
It is a privilege to care for each of these individuals and I will always strive to be attentive and respectful of their needs and honor their uniquely divine human spirit.

We are the Army Nursing Team

We honor our professional practice standards and live the Soldier values.
We believe strength and resiliency in difficult times is the cornerstone of Army Nursing.
We embrace the diversity of our team and implicitly understand that we must maintain a unified, authentically positive culture and support each other's physical, social, and environmental well-being.
We have a collective responsibility to mentor and foster the professional growth of our newest Team members so they may mentor those who follow.

We remember those nursing professionals who came before us and honor their legacy, determination, and sacrifice.
We are fundamentally committed to provide exceptional care to past, present, and future generations who bravely defend and protect our Nation.

The U.S. Army Nurse Corps (AN) consists entirely of commissioned officers. Nurses who wish to serve as an Army Nurse are required to hold an unrestricted Registered Nurse (RN) license prior to receiving a commission. For the Active Army and the Reserve Component, a Bachelor of Science in Nursing (BSN) degree is required.

Generalist Nurse – 66N; this is used to designate positions on organizational documents but is not held by the individual.

Additional skill identifiers (ASI); these designate additional areas of expertise or experience and are in addition to a basic nursing specialty.

8D – Nurse Midwife (Only used in conjunction with AOC 66G)

An Army Department circular order established the designation of Nurse

During the American Civil War, the United States Sanitary Commission, a federal civilian agency, handled most of the medical and nursing care of the Union armies, together with necessary acquisition and transportation of medical supplies. Dorothea Dix, serving as the Commission's Superintendent, was able to convince the medical corps of the value of women working in their hospitals. A famous figure was Clara Barton, whose Civil War nursing efforts had earned her the names "Angel of the Battlefield" or the "American Nightingale." In 1882, Barton helped found and served as the first president of the American Chapters of the International Red Cross.

During the 1898 Spanish–American War, the Army hired female civilian nurses to help with the wounded. Dr. Anita Newcomb McGee was appointed Acting Assistant Surgeon in the U.S. Army - the only woman at this time. After the war ended, McGee pursued the establishment of a permanent nurse corps. She wrote the section of the Army Reorganization Act legislation pertaining to nursing and is now known as the founder of the Army Nurse Corps.[4] In all, more than 1,500 women nurses worked as contract nurses during that 1898 conflict.

Race and gender played central roles. The ANC was for white women only, and fought hard to exclude or minimize the numbers of black women until 1947. They excluded all men until the Korean war when male doctors began to emphasize the need for nurses in the front lines, and this meant male nurses.[5]

Professionalization was a dominant theme during the Progressive Era, because it valued expertise and hierarchy over ad-hoc volunteering in the name of civic duty. Congress consequently established the Army Nurse Corps in 1901 and the Navy Nurse Corps in 1908.[6] The Red Cross became a quasi-official federal agency in 1905 and took upon itself primary responsibility for recruiting and assigning nurses. 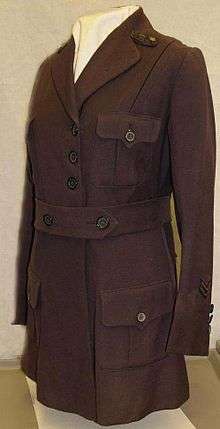 In World War I (American participation from 1917–18) the military recruited 20,000 registered nurses (all women) for military and navy duty in 58 military hospitals; they helped staff 47 ambulance companies that operated on the Western Front. More than 10,000 served overseas, while 5,400 nurses enrolled in the Army's new School of Nursing. Key decisions were made by Jane Delano, director of the Red Cross Nursing Service, Mary Adelaide Nutting, president of the American Federation of Nurses, and Annie Goodrich, dean of the Army School of Nursing.[7]

Demobilization reduced the two corps to skeleton units designed to be expanded should a new war take place. Eligibility at this time included being female, white, unmarried, volunteer, and a graduate from a civilian nursing school.

In 1920, Army Nurse Corps personnel received officer-equivalent ranks and wore Army rank insignia on their uniforms. However, they did not receive equivalent pay and were not considered part of the US Army.

Flikke remained in the Army after the war. After 12 years at Walter Reed Army hospital in Washington, D.C., she was promoted to captain and became the Assistant Superintendent of Nurses. She succeeded in creating new billets for occupational therapists and dieticians. Flikke became Superintendent, with the rank of Major, in 1938. 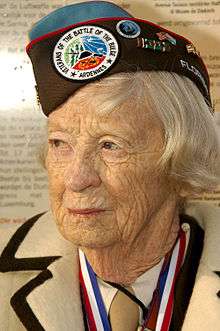 WWII Army Nurse veteran of the Battle of the Bulge

Colonel Flikke's small headquarters in 1942, though it contained only 4 officers and 25 civilians, supervised the vast wartime expansion of nurses, in cooperation with the Red Cross. She only took unmarried women age 22–30 who had their RN training from civilian schools. They enlisted for the war plus six months, and were discharged if they married or became pregnant.

Due to the Japanese attack of Pearl Harbor on 7 December 1941, the United States entered the Pacific part of World War II. Along with this military effort was the work of the Flying Tigers in Kunming, China, under Claire Chennault. Nurses were thus needed in China to serve the U.S. Army. These nurses were recruited among the Chinese nurses residing in China, particularly the English-speaking nurses that fled Hong Kong (a British colony) to free China due to the Japanese invasion of Hong Kong on 8 December 1941. The Hong Kong nurses were trained by the Department of Medical Services (directed by Dr. Percy Selwyn Selwyn-Clarke) of the Government of Hong Kong. They took up Nursing positions at the Flying Tigers (Rebecca Chan Chung 鍾陳可慰, Daisy Pui-Ying Chan 陳培英), U.S. Army (Rebecca Chan Chung 鍾陳可慰, Daisy Chan 陳培英, Cynthia Chan 陳靜渝), Chinese Red Cross (Elsie Chin Yuen Seetoo, Irene Yu 余秀芬) and China National Aviation Corporation (Rebecca Chan Chung 鍾陳可慰, Irene Yu 余秀芬).[10][11][12][13] Cynthia Chan 陳靜渝 is the elder sister of Anna Chan 陳香梅 (Mrs. Chennault).

On 26 February 1944 Congress passed a bill that granted Army and Navy Nurses actual military rank, approved for the duration of the war plus 6 months.[14]

With over 8 million soldiers and airmen, the needs were more than double those of World War I. Hundreds of new military hospitals were constructed for the expected flow of casualties. Fearing a massive wave of combat casualties once Japan was invaded in late 1945, President Franklin D. Roosevelt called on Congress early in 1945 for permission to draft nurses. However, with the rapid collapse of Germany early in 1945, and the limitation of the war in the Pacific to a few islands, the draft was not needed and was never enacted. 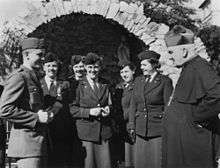 By the end of the war, the Army and Army Air Forces (AAF) had 54,000 nurses and the Navy 11,000—all women. Some 217 black nurses served in all-black Army medical units. The AAF was virtually autonomous by 1942, and likewise its Nurse Corps. Much larger numbers of enlisted men served as medics. These men were in effect practical nurses who handled routine care under the direction of nurse officers. Likewise many enlisted Wacs and Wafs served in military hospitals. Medical advances greatly increased survival rates for the wounded: 96% of the 670,000 wounded soldiers and sailors who made it to a field hospital staffed by nurses and doctors survived their injuries. Amputations were seldom necessary to combat gangrene. Penicillin and sulfa drugs proved highly successful in this regard. Nurses were deeply involved with post-operative recovery procedures, air evacuation, and new techniques in psychiatry and anesthesia.

Upon Flikke's retirement in 1943, she was succeeded by Florence A. Blanchfield, who successfully promoted new laws in 1947, that established the Army, Navy and Air Force Nurse Corps on a permanent basis, giving the nurses regular commissions on exactly the same terms as male officers. A month before she retired in 1947, Blanchfield became the first women to hold a regular Army commission. 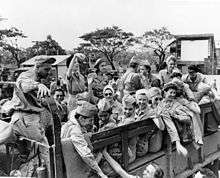 Army nurses in the Philippines liberated after three years as POWs
See also: Angels of Bataan and Reba Z. Whittle

During the Korean War, Army nurses would once again treat the wounded. Nurses would staff MASH units and standard emplaced hospitals in Japan and Korea. Nurses were on the forefront of battlefield medicine during the conflict, playing a major role in the treatment of the wounded U.N. forces within mere minutes or hours of the wounds being inflicted.

The Army Nurse Corps stopped being all-female in 1955;[15] that year Edward L.T. Lyon was the first man to receive a commission in the Army Nurse Corps.[16] During the Vietnam War many Army nurses would see deployment to South East Asia. Army nurses would staff all major Army hospitals in the theatre, including: Cam Ranh Bay, Da Nang, and Saigon. Vietnam would be the first major deployment of men as nurses into the combat theater, as men could be located in more hazardous locations than what was considered safe for females. Many Army nurses faced enemy fire for the first time due to the unconventional nature of the conflict, and several nurses would die from direct enemy fire. On at least one occasion the US Army hospital at Cam Ranh Bay was assaulted and severely damaged, with a loss of both patient and staff life.

Army Nurses are deployed all over the world, participating in humanitarian missions, and supporting the Global War on Terror.

The Nurse Corps continues as a significant part of the Army medical department. Most training is conducted at Fort Sam Houston, Texas.

The Nurse Corps has a distinctive insignia, a gold color metal caduceus, bearing an 'N' in black enamel.

From its founding in 1908 until after World War II in 1947, the Army Nurse Corps was led by a superintendent. Its nurses had no permanent commissioned rank. The Army-Navy Nurses Act took effect on 16 April 1947, establishing the Army Nurse Corps as a staff corps, with officers holding permanent commissioned rank from second lieutenant to lieutenant colonel. The corps was to be led by a director holding the rank of colonel while in that position.

This article incorporates public domain material from websites or documents of the United States Army.