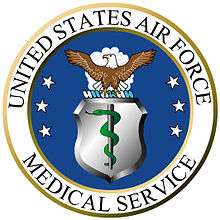 Dental laboratory technicians receive an extensive specialized extended training at the US Air Force School Of Health Care Science. Graduates continue upgraded technical training throughout their career. Advanced courses include the production and technical understanding of complex dental and maxiofacial prosthetics. The Dental Corps consists of commissioned officers holding the Doctor of Dental Surgery degree or Doctor of Dental Medicine degree or a further, post-graduate degree. The chief of the Dental Corps is a major general. The enlisted members of the USAF are assistants, technicians and prophylaxis technicians that train under licensed hygienists. The enlisted members are to support commissioned officers in different areas of the dental clinic. The enlisted members usually receive special training at certain bases that may have periodontist, oral surgeon, endodontist, orthodontist. After the first few years rotating in the clinic as an enlisted member, they can either become a prophylaxis technician which is a hygienist in the Air Force. Enlisted members also have the choices to work in other areas, such as DIPC, where instruments are cleaned, or front desk.

The Air Force also recruits fully trained and practicing physicians to enter active duty. Their rank at entry is based on their experience.

The Medical Service Corps (MSC) consists entirely of commissioned officers. Members are required to hold a bachelor's or master's degree in Healthcare, Management, Economics, Finance, Operations Research, Business Administration or similar degree before receiving a commission, and must complete a four-week orientation course at Maxwell AFB, AL, and then a five-week military Health Systems Administration (HSA) course at Fort Sam Houston, San Antonio, TX. MSCs serve as hospital administrators, resource management officers, directors of information systems/technology, managed care and patient administrators, group practice managers, medical logisticians, and medical readiness officers. MSC officers are also expected to become Board certified by one of several national healthcare administration organizations. This is usually done while the officer is in the rank of captain or Major. The Chief of the Medical Service Corps is Brigadier General Jay Burks.