From 1828 it was known as the Friedrich-Wilhelms-Universität, and later (unofficially) also as the Universität unter den Linden after its location in the former palace of Prince Henry of Prussia (1726–1802) which his brother, King Frederick II, had built for him between 1748 and 1753 on the avenue Unter den Linden. 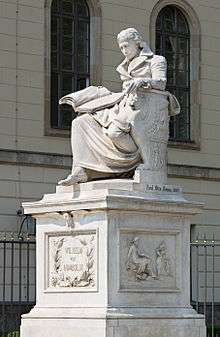 The Berlin University in 1850

The structure of German research-intensive universities, such as Humboldt, served as a model for institutions like Johns Hopkins University. Further, it has been claimed that "the 'Humboldtian' university became a model for the rest of Europe [...] with its central principle being the union of teaching and research in the work of the individual scholar or scientist."[8] 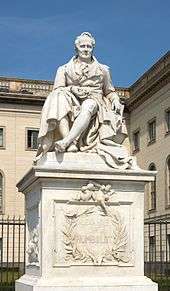 Statue of Alexander von Humboldt outside Humboldt University, from 1883 by artist Reinhold Begas. 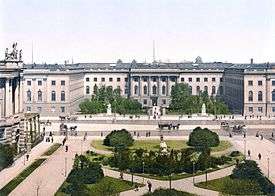 Humboldt University became an emulated model of a modern university in the 19th century (photochrom from 1900).[9]

During this period of enlargement, Berlin University gradually expanded to incorporate other previously separate colleges in Berlin. An example would be the Charité, the Pépinière and the Collegium Medico-chirurgicum. In 1717, King Friedrich I had built a quarantine house for Plague at the city gates, which in 1727 was rechristened by the "soldier king" Friedrich Wilhelm: "Es soll das Haus die Charité heißen" (It will be called Charité [French for charity]). By 1829 the site became Berlin University's medical campus and remained so until 1927 when the more modern University Hospital was constructed.

Berlin University started a natural history collection in 1810, which, by 1889 required a separate building and became the Museum für Naturkunde. The preexisting Tierarznei School, founded in 1790 and absorbed by the university, in 1934 formed the basis of the Veterinary Medicine Facility (Grundstock der Veterinärmedizinischen Fakultät). Also the Landwirtschaftliche Hochschule Berlin (Agricultural University of Berlin), founded in 1881 was affiliated with the Agricultural Faculties of the University.

After 1933, like all German universities, it was affected by the Nazi regime. The rector during this period was Eugen Fischer. It was from the university's library that some 20,000 books by "degenerates" and opponents of the regime were taken to be burned on May 10 of that year in the Opernplatz (now the Bebelplatz) for a demonstration protected by the SA that also featured a speech by Joseph Goebbels. A monument to this can now be found in the center of the square, consisting of a glass panel opening onto an underground white room with empty shelf space for 20,000 volumes and a plaque, bearing an epigraph from an 1820 work by Heinrich Heine: "Das war ein Vorspiel nur, dort wo man Bücher verbrennt, verbrennt man am Ende auch Menschen" ("This was but a prelude; where they burn books, they ultimately burn people").

The Law for the Restoration of the Professional Civil Service (German "Gesetz zur Wiederherstellung des Berufsbeamtentums") resulted in 250 Jewish professors and employees being fired during 1933/1934 and numerous doctorates being withdrawn. Students and scholars and political opponents of Nazis were ejected from the university and often deported. During this time nearly one third of all of the staff were fired by the Nazis.

The Soviet Military Administration in Germany (SMAD) ordered (Befehl-Nr. 4) the opening of the university in January 1946. The SMAD wanted a redesigned Berlin University based on the Soviet model, however they insisted on the phrasing "newly opened" and not "re-opened" for political reasons. The president of the German Central Administration for National Education (DZVV), Paul Wandel, in his address at the January 29, 1946, opening ceremony, said: "I spoke of the opening, and not of the re-opening of the university. [...] The University of Berlin must effectively start again in almost every way. You have before you this image of the old university. What remains of that is nought but ruins." The teaching was limited to seven departments working in reopened, war-damaged buildings, with many of the teachers dead or missing. However, by the winter semester of 1946, the Economic and Educational Sciences Faculty had re-opened. 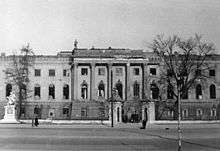 The Workers and Peasants Faculty (German: Arbeiter-und-Bauern-Fakultät) (ABF), an education program aimed at young men who, due to political or racial reasons, had been disadvantaged under the Nazis, was established at the university during this time. This program existed at Berlin University until 1962.

The East-West conflict in post-war Germany led to a growing communist influence in the university. This was controversial, and incited strong protests within the student body and faculty. Soviet NKVD secret police arrested a number of students in March 1947 as a response. The Soviet Military Tribunal in Berlin-Lichtenberg ruled the students were involved in the formation of a "resistance movement at the University of Berlin", as well as espionage, and were sentenced to 25 years of forced labor. From 1945 to 1948, 18 other students and teachers were arrested or abducted, many gone for weeks, and some taken to the Soviet Union and executed.

In the spring of 1948, after several university students with admission irregularities were withdrawn, the opposition demanded a "free" university. Students and scholars, with support from especially the Americans, the newspaper Der Tagesspiegel, and the governing Mayor Ernst Reuter founded the Free University of Berlin in Dahlem (part of the American sector). The decades-long division of the city into East and West Berlin finally cemented the division into two independent universities permanently.

Since the old name of the university had some monarchic origins the university was renamed. Although the Soviets and the government of East Berlin preferred a naming after some communist leader the university was in the end named after the two Humboldt brothers.[10] Independent research and teaching was not longer possible; instead the academic staff was replaced by communists to get the education system in line with the ruling ideology. Nevertheless, it was still possible in some areas to restore international contacts and create world-wide cooperation. The long-standing and intensive research and exchange links with the universities in Eastern Europe and particularly in the former Soviet Union are worth special mentioning; many of these links are without parallel in Germany. In addition, formal academic cooperation with nearly all universities in the capital cities of Western Europe has existed since the 1970s. And for several years there have been close relations to universities in Japan and the United States, as well as in Asian, African and Latin American countries.[11] Until the collapse of the East German regime in 1989, Humboldt University remained under tight ideological control of the Sozialistische Einheitspartei Deutschlands (Socialist Unity Party of Germany), or SED, which, by rigorously selecting students according to their conformity to the party line, made sure that no democratic opposition could grow on its university campuses. Its communist-selected students and scholars did not participate to any significant degree in the East German democratic civil rights movements of 1989, and elected the controversial SED member and former Stasi spy Heinrich Fink as the Rector of the university as late as 1990.

After the unification of East and West Germany, the university was radically restructured and all professors had to reapply for their positions. The faculty was largely replaced with West German professors, among them the historian Heinrich August Winkler. Today, Humboldt University is a state university with a large number of students (36,986 in 2014, among them more than 4,662 foreign students) after the model of West German universities, and like its counterpart the Free University of Berlin.

The university consists of three different campuses namely Campus Mitte, Campus Nord and Campus Adlershof. Its main building is located in the centre of Berlin at the boulevard Unter den Linden and is the heart of Campus Mitte. The building was erected on order by King Frederick II for his younger brother Prince Henry of Prussia. All the institutes of humanities are located around the main building together with the Department of Law and the Department of Business and Economics. Campus Nord is located north of the main building close to Berlin Hauptbahnhof and is the home of the life science departments including the university medical center Charité. The natural science together with computer science and mathematics are located at Campus Adlershof in the south-east of Berlin. Furthermore, the university continues its tradition of a book sale at the university gates facing Bebelplatz. 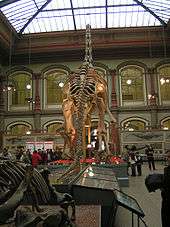 The Humboldt Museum is one the largest natural history museums in the world.

These are the nine faculties into which the university is divided:[12]

Furthermore, there are two independent institutes (Zentralinstitute) that are part of the university:

The former Royal Library, now seat of the Faculty of Law

When the Royal Library proved insufficient, a new library was founded in 1831, first located in several temporary sites. In 1871–1874 a library building was constructed, following the design of architect Paul Emanuel Spieker. In 1910 the collection was relocated to the building of the Berlin State Library.

During the Weimar Period the library contained 831,934 volumes (1930) and was thus one of the leading university libraries in Germany at that time.

During the Nazi book burnings in 1933, no volumes from the university library were destroyed. Also, the loss through World War II was comparatively small. In 2003, natural science related books were outhoused to the newly founded library at the Adlershof campus, which is dedicated solely to the natural sciences.

Since the premises of the State Library had to be cleared in 2005, a new library building is about to be erected close to the main building in the center of Berlin. The "Jacob und Wilhelm Grimm-Zentrum" (Jacob and Wilhelm Grimm Centre, Grimm Zentrum or GZ as it is can be referred to by students) opened in 2009.

The books of the Institut für Sexualwissenschaft were destroyed during the Nazi book burnings and the institute destroyed. Under the terms of the Magnus Hirschfeld Foundation, the government had undertaken to continue the work of the institute at the university after its founder's death. However these terms were ignored. In 2001 however the university acquired the Archive for Sexology from the Robert Koch Institute, which was founded on a large private library donated by Erwin J. Haeberle. This has now been housed at the new Magnus Hirschfeld Center.[13] 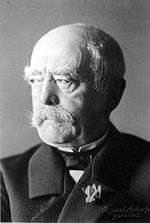 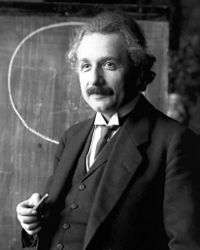 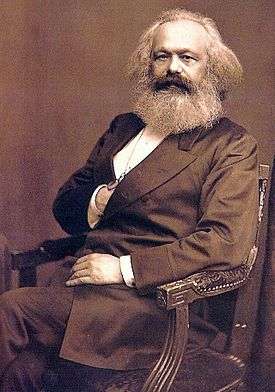 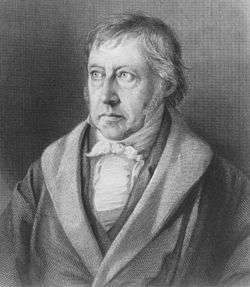 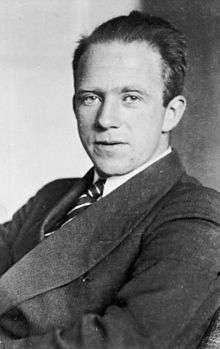 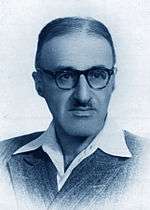 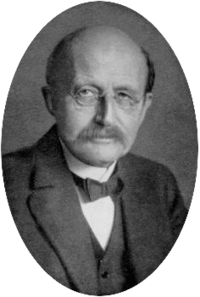 There are 29 Nobel Prize winners affiliated with the Humboldt University: 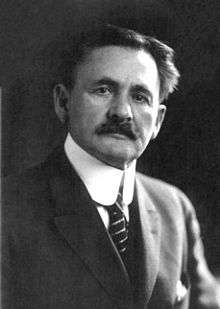 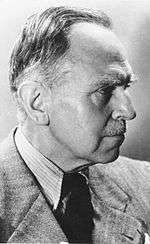 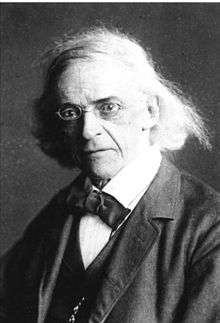 In 2016 the British QS World University Rankings[14] ranked Humboldt University 126th overall in the world. Its subject rankings were: 27th in Arts & Humanities and 14th in Philosophy.

The British Times Higher Education World University Ranking 2016 listed Humboldt-University as the 49th best university in the world and 3rd best in Germany.[15]