The University of Lausanne (UNIL, French: Université de Lausanne) in Lausanne, Switzerland was founded in 1537 as a school of theology, before being made a university in 1890. Today about 13,500 students and 2,200 researchers study and work at the university. Approximately 1,500 international students attend the university (120 nationalities), which has a wide curriculum including exchange programs with world-renowned universities.

Together with the École polytechnique fédérale de Lausanne (EPFL) the university forms a vast campus at the shores of Lake Geneva.

The University of Lausanne also comprises schools and different sections, including but not limited to: 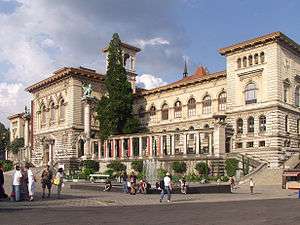 The Palais de Rumine, one of the former buildings of the University of Lausanne

The Academy, forerunner of the UNIL, was founded in 1537. Its vocation at that time was to train ministers for the church. The university enjoyed a certain renown due to the fact that it was the only French language Protestant school of theology. As the centuries passed, the number of faculties increased and diversified until, in 1890, the Academy received the name and status of a university.

In 1909 Rodolphe Archibald Reiss founded the first school of forensic science in the world: the Institut de police scientifique.

From 1970, the university moved progressively from the old centre of Lausanne, around the Cathedral and Château, to its present site at Dorigny.

The end of the 20th century witnessed the beginnings of an ambitious project aiming at greater co-operation and development among the French-speaking universities of Lausanne, Geneva, and Neuchâtel, together with the Swiss Federal Institute of Technology in Lausanne (EPFL). Among others, this led to the transfer of the sections of Mathematics, Physics and Chemistry from the University to the EPFL; the funds that were made available following this transfer were invested in the development of the life sciences at the University, including the creation of a Center for Integrative Genomics.

In 2003 two new faculties were founded, concentrating on the life and human sciences: the Faculty of Biology and Medicine and the Faculty of Geosciences and Environment.

On 1 January 2014, the Swiss Graduate School of Public Administration (IDHEAP) was integrated into the University of Lausanne.[3]

The main campus is presently situated outside the city of Lausanne, on the shores of Lake Léman, in Dorigny. It is adjacent to the Swiss Federal Institute of Technology in Lausanne (EPFL) and is served by the Lausanne Metro Line 1 (M1). The two schools together welcome about 20,000 students.

The UNIL and the EPFL share an active sports centre located on the campus, on the shores of Lake Geneva[4] and their campus is also equipped with a bicycle sharing system.[5]

The university campus is made up of individual buildings with a park and arboretum in between. The university library also serves as eating hall and is centrally located. The view from the library across the sports fields to the lake of Geneva and the French and Swiss Alps. On a clear day, Mont Blanc can be seen.

The Department of Biochemistry, the Ludwig Cancer Research branch of the University of Lausanne and the WHO Immunology Research and Training Centre and some laboratories of the University Hospital of Lausanne are located in Épalinges. The Biopôle was built next to the Épalinges campus. The Faculty of Biology and Medicine also comprises a fourth site, the Psychiatric Hospital of Cery, in Prilly.

The University of Texas at Dallas TOP 100 BUSINESS SCHOOL RESEARCH RANKINGS ranked the Faculty of Business & Economics of the University of Lausanne (HEC Lausanne) as follows:

The QS World University Rankings[11] ranked the University of Lausanne as follows:

The Academic Ranking of World Universities [ARWU] ranked the University of Lausanne as follows:

4 International Colleges & Universities [4icu.org] ranked the popularity of the website of the University of Lausanne as follows:

The UNIL publish free monthly campus magazine entitled L'Uniscope. The UNIL also publish Allez savoir !, a magazine aimed at a larger audience (general public), published three times a year (in May, September and January) and whose subscription is free.

Besides these, L'auditoire is the students newspapers from both UNIL and EPFL, of a circulation 19 000 free copies.

In 2011, an on-line network of the UNIL alumni, called ALUMNIL, was created.[12] Since then, regular events (throughout the year) and an annual party (in autumn) are organised every year for the alumni.

More alumni from the Faculty of Business and Economics

Neoclassical school of thought in economics founded at the University of Lausanne by two of its professors: Léon Walras and Vilfredo Pareto. The School of Lausanne is associated with the development of general equilibrium theory as well as the marginalist revolution Marginalism.