The Saints Cyril and Methodius University of Skopje (Macedonian: Универзитет „Св. Кирил и Методиј“ – Скопје) is the largest university in the Republic of Macedonia. It was named after the Byzantine Christian theologians and Christian missionaries Cyril and Methodius, originated from Thessalonica, and considered as the 'apostles of the Slavs', enlighteners who developed the precursors to the Cyrillic script used today in most Slavic languages. More than 50,000 students study at the Skopje University, including some 700 foreign students. Furthermore, the teaching and research staff number 2,390 people; this is further supported by over 300 members in the university's institutions.

The primary language of instruction is Macedonian, but there are a number of courses which are carried out in English, German, French, Italian and minority languages. 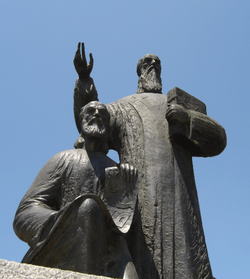 Statue of Ss. Cyril and Methodius in the center of the campus 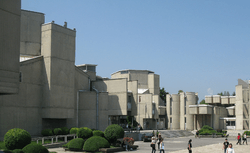 The central building of the university 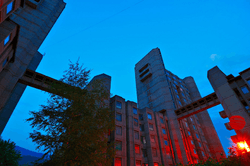 The university is divided into 23 faculties and 10 research institutes: 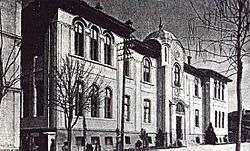 During the Bulgarian occupation of Vardar Banovina (1941-1944) the new authorities established in 1943, in Skopje, Macedonia's first institute of higher education - the Tsar Boris III University.[1] Due to the withdrawal of the Bulgarian administration in the Autumn of 1944, the University stopped its educational activity. However, after the establishment of the Socialist Republic of Macedonia, on the third session of the Presidium of the Antifascist Council of the National Liberation of Macedonia, held in April 1945, one of the items on the agenda was the question of opening a Macedonian university to replace the Bulgarian one.[2] At the end of 1946, the concept of a university began to be realized and the official opening ceremony for the Faculty of Philosophy, the cornerstone of the University of Skopje, took place on 29 November of that year. This marked the beginning of a Macedonian state university. The first faculty consisted of the Department of History and Philology and the Department of Mathematics and Natural Science, while the Medical Faculty and the Faculty of Agriculture and Forestry were added in 1947. Fifty-eight students enrolled during the first academic year of 1946–1947; in the next year this number grew to 907. The development of higher education in Macedonia was characterized by rapid growth, and several other faculties were added in the following years. Parallel to the education activities in the existing faculties, scholarly research was undertaken with the development of independent institutes of research. Thus, the Institute of National History was founded in 1948, followed by Institute of Folklore in 1949, and the Institute of Economics in 1952. Today, there are 10 research institutes affiliated with the University of Skopje.

After the great 1963 Skopje earthquake, which destroyed most of the city of Skopje, the university was leveled and some of the most modern laboratories in Yugoslavia were destroyed. By this time the University of Skopje was the third largest in Yugoslavia. It was quickly rebuilt on the premises of a much larger and modern urban campus. At the request of Yugoslav authorities, scientists from UNESCO's Department of Natural Sciences were sent to meet with the university's scientists to develop plans for the rehabilitation of the university's science laboratories. As a result, a large donation of equipment for science teaching and research was gathered from around the world through UNESCO's international programme of aid to Skopje.

At present, the University of Skopje is carried out in the spirit of the 1991 Constitution of the Republic of Macedonia, which incorporated the social, economic and political changes that had taken place after Macedonia proclaimed its independence from the Former Yugoslav Federate State. On 3 August 2000 the Parliament of the Republic of Macedonia brought the new Law on Higher Education which adopted the overall European standards of higher education. The management organs of the university are the University Senate, consisting of two staff members from each faculty and scientific research institutes, five appointed members by the government of the Republic of Macedonia and five students delegated from the Student Organization; the University Board, consisting of the rector, the vice-rectors, the secretary general, the deans of the faculties, the directors of the scientific-research institutes and one student representative; and the rector. The university represents a functional community of 25 faculties and 10 research institutes.

The Ss. Cyril and Methodius University’s mission is to be an: