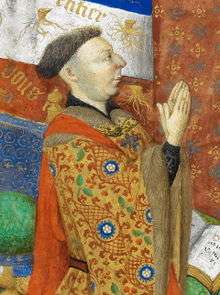 John of Lancaster, 1st Duke of Bedford, founder of the University

The institution was founded in 1432[3] by John of Lancaster, 1st Duke of Bedford, the first rector being a Cornishman, Michael Tregury, afterwards Archbishop of Dublin.[4] It originally consisted of a faculty of Canon Law and a faculty of Law. By 1438, it already had five faculties. The foundation was confirmed by the King of France Charles VII the Victorious in 1452.

On July 7, 1944, during the Battle for Caen, the university was totally destroyed by aerial bombing. Reconstruction began in 1948, the new university was inaugurated on June 1 and 2, 1957. Its logo, the mythical Phoenix, symbolises this revival.[5]