Times Higher Education World University Rankings is an annual publication of university rankings by Times Higher Education (THE) magazine. The publisher had collaborated with Quacquarelli Symonds (QS) to publish the joint THE–QS World University Rankings from 2004 to 2009 before it turned to Thomson Reuters for a new ranking system. The publication now comprises the world's overall, subject, and reputation rankings, alongside three regional league tables, Asia, Latin America, and BRICS & Emerging Economies which are generated by consistent methodology. It is considered as one of the most widely observed university measures together with Academic Ranking of World Universities and QS World University Rankings.[1][2][3] It is praised for having a new improved methodology but undermining non-English-instructing institutions and being commercialized are the major criticisms.[4][5][6]

After the 2009 rankings, Times Higher Education took the decision to break from QS and signed an agreement with Thomson Reuters to provide the data for its annual World University Rankings from 2010 onwards. The publication developed a new rankings methodology in consultation with its readers, its editorial board and Thomson Reuters. Thomson Reuters will collect and analyse the data used to produce the rankings on behalf of Times Higher Education. The first ranking was published in September 2010.[8]

Commenting on Times Higher Education's decision to split from QS, former editor Ann Mroz said: "universities deserve a rigorous, robust and transparent set of rankings – a serious tool for the sector, not just an annual curiosity." She went on to explain the reason behind the decision to continue to produce rankings without QS' involvement, saying that: "The responsibility weighs heavy on our shoulders...we feel we have a duty to improve how we compile them."[9]

Phil Baty, editor of the new Times Higher Education World University Rankings, admitted in Inside Higher Ed: "The rankings of the world's top universities that my magazine has been publishing for the past six years, and which have attracted enormous global attention, are not good enough. In fact, the surveys of reputation, which made up 40 percent of scores and which Times Higher Education until recently defended, had serious weaknesses. And it's clear that our research measures favored the sciences over the humanities."[10]

He went on to describe previous attempts at peer review as "embarrassing" in The Australian: "The sample was simply too small, and the weighting too high, to be taken seriously."[11] THE published its first rankings using its new methodology on 16 September 2010, a month earlier than previous years.[12]

In 2014 Times Higher Education announced a series of important changes to its flagship THE World University Rankings and its suite of global university performance analyses, following a strategic review by THE parent company TES Global.[15]

A draft of the inaugural methodology was released on 3 June 2010. The draft stated that 13 indicators would first be used and that this could rise to 16 in future rankings, and laid out the categories of indicators as "research indicators" (55 percent), "institutional indicators" (25 percent), "economic activity/innovation" (10 percent), and "international diversity" (10 percent).[17] The names of the categories and the weighting of each was modified in the final methodology, released on 16 September 2010.[16] The final methodology also included the weighting signed to each of the 13 indicators, shown below:[16]

The Times Higher Education billed the methodology as "robust, transparent and sophisticated," stating that the final methodology was selected after considering 10 months of "detailed consultation with leading experts in global higher education," 250 pages of feedback from "50 senior figures across every continent" and 300 postings on its website.[16] The overall ranking score was calculated by making Z-scores all datasets to standardize different data types on a common scale to better make comparisons among data.[16]

The reputational component of the rankings (34.5 percent of the overall score – 15 percent for teaching and 19.5 percent for research) came from an Academic Reputation Survey conducted by Thomson Reuters in spring 2010. The survey gathered 13,388 responses among scholars "statistically representative of global higher education's geographical and subject mix."[16] The magazine's category for "industry income – innovation" came from a sole indicator, institution's research income from industry scaled against the number of academic staff." The magazine stated that it used this data as "proxy for high-quality knowledge transfer" and planned to add more indicators for the category in future years.[16]

Data for citation impact (measured as a normalized average citation per paper), comprising 32.5 percent of the overall score, came from 12,000 academic journals indexed by Thomson Reuters' large Web of Science database over the five years from 2004 to 2008. The Times stated that articles published in 2009–2010 have not yet completely accumulated in the database.[16] The normalization of the data differed from the previous rankings system and is intended to "reflect variations in citation volume between different subject areas," so that institutions with high levels of research activity in the life sciences and other areas with high citation counts will not have an unfair advantage over institutions with high levels of research activity in the social sciences, which tend to use fewer citations on average.[16]

The magazine announced on 5 September 2011 that its 2011–2012 World University Rankings would be published on 6 October 2011.[18] At the same time, the magazine revealed changes to the ranking formula that will be introduced with the new rankings. The methodology will continue to use 13 indicators across five broad categories and will keep its "fundamental foundations," but with some changes. Teaching and research will each remain 30 percent of the overall score, and industry income will remain at 2.5 percent. However, a new "international outlook – staff, students and research" will be introduced and will make up 7.5 percent of the final score. This category will include the proportion of international staff and students at each institution (included in the 2011–2012 ranking under the category of "international diversity"), but will also add the proportion of research papers published by each institution that are co-authored with at least one international partner. One 2011–2012 indicator, the institution's public research income, will be dropped.[18]

On 13 September 2011, the Times Higher Education announced that its 2011–2012 list will only rank the top 200 institutions. Phil Baty wrote that this was in the "interests of fairness," because "the lower down the tables you go, the more the data bunch up and the less meaningful the differentials between institutions become." However, Baty wrote that the rankings would include 200 institutions that fall immediately outside the official top 200 according to its data and methodology, but this "best of the rest" list from 201 to 400 would be unranked and listed alphabetically. Baty wrote that the magazine intentionally only ranks around 1 percent of the world's universities in a recognition that "not every university should aspire to be one of the global research elite."[19] However, the 2015/16 edition of the Times Higher Education World University Rankings ranks 800 universities, while Phil Baty announced that the 2016/17 edition, to be released on 21 September 2016, will rank "980 universities from 79 countries".[20][21]

The methodology of the rankings was changed during the 2011-12 rankings process, with details of the changed methodology here.[22] Phil Baty, the rankings editor, has said that the THE World University Rankings are the only global university rankings to examine a university's teaching environment, as others focus purely on research.[23] Baty has also written that the THE World University Rankings are the only rankings to put arts and humanities and social sciences research on an equal footing to the sciences.[24] However, this claim is no longer true. In 2015, QS introduced faculty area normalization to their QS World University Rankings, ensuring that citations data was weighted in a way that prevented universities specializing in the Life Sciences and Engineering from receiving undue advantage.[25]

In November 2014 the magazine announced further reforms to the methodology after a review by parent company TES Global. The major change being all institutional data collection would be bought in house severing the connection with Thomson Reuters. In addition research publication data would now be sourced from Elsevier's Scopus database.[26]

The reception to the methodology was varied.

Ross Williams of the Melbourne Institute, commenting on the 2010–2011 draft, stated that the proposed methodology would favour more focused "science-based institutions with relatively few undergraduates" at the expense of institutions with more comprehensive programmes and undergraduates, but also stated that the indicators were "academically robust" overall and that the use of scaled measures would reward productivity rather than overall influence.[4] Steve Smith, president of Universities UK, praised the new methodology as being "less heavily weighted towards subjective assessments of reputation and uses more robust citation measures," which "bolsters confidence in the evaluation method."[5] David Willetts, British Minister of State for Universities and Science praised the rankings, noting that "reputation counts for less this time, and the weight accorded to quality in teaching and learning is greater."[6] In 2014, David Willetts became chair of the TES Global Advisory Board, responsible for providing strategic advice to Times Higher Education.[27]

Times Higher Education gives much importance to citations on their ranking. This has been criticised for undermining universities that do not use English as their primary language.[28] Citations and publications in a language different from English are harder to come across.[29] Thus, such a methodology is condemned for being inappropriate and not comprehensive enough.[30] A second important disadvantage for universities of non Anglo-Saxon tradition is that within the disciplines of social sciences and humanities the main tool for publications are books which are not or only rarely covered by citations records.[31]

Times Higher Education has also been criticised for its strong bias towards institutions that taught 'hard science' and had high quality output of research in these fields, often to the disadvantage of institutions more focused on other subjects like the social sciences and humanities. For instance in the former THE-QS World University Rankings, LSE was ranked 11th in the world in 2004 and 2005, but dropped to 66th and 67th in the 2008 and 2009 edition.[32] In January 2010, THE concluded that the method employed by Quacquarelli Symonds, who conducted the survey on their behalf, was flawed in such a way that bias was introduced against certain institutions, including LSE.[33] A representative of Thomson Reuters, THE's new partner, commented on the controversy: "LSE stood at only 67th in the last Times Higher Education-QS World University Rankings – some mistake surely? Yes, and quite a big one."[33] Nonetheless, after the change of data provider to Thomson Reuters the following year, LSE fell even further to 86th place, with the ranking described by a representative of Thomson Reuters as 'a fair reflection of their status as a world class university'.[34] LSE despite being ranked continuously near the top in its national rankings, has been placed below other British universities in the Times Higher Education World Rankings in recent years, other institutions such as Sciences Po have suffered due to the inherent methodology bias still used. Trinity College Dublin's ranking in 2015 and 2016 was lowered by a basic mistake in data it had submitted; education administrator Bahram Bekhradnia said the fact this went unnoticed evinced a "very limited checking of data" "on the part of those who carry out such rankings". Bekhradnia also opined "while Trinity College was a respected university which could be relied upon to provide honest data, unfortunately that was not the case with all universities worldwide."[35] 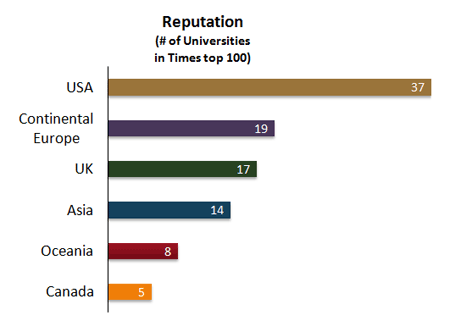 Regions with universities included in the reputation league tables.

THE's World Reputation Rankings serve as a subsidiary of the overall league tables and rank universities independently in accordance with their scores in prestige.[45]

The Times Higher Education BRICS & Emerging Economies Rankings only includes universities in countries classified as "emerging economies" by FTSE Group, including the "BRICS" nations of Brazil, Russia, India, China and South Africa. Hong Kong institutions are not included in this ranking.