Industrial engineering is a branch of engineering which deals with the optimization of complex processes, systems or organizations. Industrial engineers work to eliminate waste of time, money, materials, man-hours, machine time, energy and other resources that do not generate value. According to the Institute of Industrial and Systems Engineers, they figure out how to do things better, they engineer processes and systems that improve quality and productivity.[1]

Industrial engineering is concerned with the development, improvement, and implementation of integrated systems of people, money, knowledge, information, equipment, energy, materials, analysis and synthesis, as well as the mathematical, physical and social sciences together with the principles and methods of engineering design to specify, predict, and evaluate the results to be obtained from such systems or processes.[2] While industrial engineering is a longstanding engineering discipline subject to (and eligible for) professional engineering licensure in most jurisdictions, its underlying concepts overlap considerably with certain business-oriented disciplines such as operations management.

While originally applied to manufacturing, the use of "industrial" in "industrial engineering" can be somewhat misleading, since it has grown to encompass any methodical or quantitative approach to optimizing how a process, system, or organization operates. Some engineering universities and educational agencies around the world have changed the term "industrial" to broader terms such as "production" or "systems", leading to the typical extensions noted above. In fact, the primary U.S. professional organization for Industrial Engineers, the Institute of Industrial Engineers (IIE) has been considering changing its name to something broader (such as the Institute of Industrial & Systems Engineers), although the latest vote among membership deemed this unnecessary for the time being.

Examples of where industrial engineering might be used include flow process charting, process mapping, designing an assembly workstation, strategizing for various operational logistics, consulting as an efficiency expert, developing a new financial algorithm or loan system for a bank, streamlining operation and emergency room location or usage in a hospital, planning complex distribution schemes for materials or products (referred to as supply-chain management), and shortening lines (or queues) at a bank, hospital, or a theme park.

There is a general consensus among historian that the roots of the Industrial Engineering Profession date back to the Industrial Revolution. The technologies that helped mechanize traditional manual operations in the textile industry including the Flying shuttle, the Spinning jenny, and perhaps most importantly the Steam engine generated Economies of scale that made Mass production of in centralized locations attractive for the first time. The concept of the production system had its genesis in the factories created by these innovations.[3] 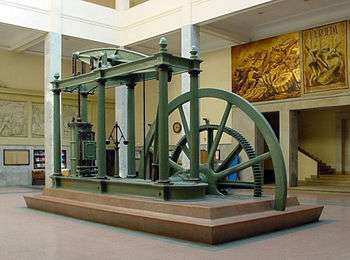 Adam Smith's concepts of Division of Labour and the "Invisible Hand" of capitalism introduced in his treatise "The Wealth of Nations" motivated many of the technological innovators of the Industrial revolution to establish and implement factory systems. The efforts of James Watt and Matthew Boulton led to the first integrated machine manufacturing facility in the world, including the implementation of concepts such as cost control systems to reduce waste and increase productivity and the institution of skills training for craftsmen.[3]

Charles Babbage became associated with Industrial engineering because of the concepts he introduced in his book "On the Economy of Machinery and Manufacturers" which he wrote as a result of his visits to factories in England and the United States in the early 1800s. The book includes subjects such as the time required to perform a specific task, the effects of subdividing tasks into smaller and less detailed elements, and the advantages to be gained from repetitive tasks.[3]

Eli Whitney and Simeon North proved the feasibility of the notion of Interchangeable parts in the manufacture of muskets and pistols for the US Government. Under this system, individual parts were mass-produced to tolerances to enable their use in any finished product. The result was a significant reduction in the need for skill from specialized workers, which eventually led to the industrial environment to be studied later.[3]

Frederick Taylor is generally credited as being the father of the Industrial Engineering discipline. He earned a degree in mechanical engineering from Steven's University, and earned several patents from his inventions. His books, Shop Management and The Principles of Scientific management which were published in the early 1900s, were the beginning of Industrial Engineering.[4] Improvements in work efficiency under his methods was based on improving work methods, developing of work standards, and reduction in time required to carry out the work. With an abiding faith in the scientific method, Taylor's contribution to "Time Study" sought a high level of precision and predictability for manual tasks.[3]

Frank Gilbreth and Lilian Gilbreth were the other cornerstone of the Industrial Engineering movement. They categorized the elements of human motion into 18 basic elements called therbligs. This development permitted analysts to design jobs without knowledge of the time required to do a job. These developments were the beginning of a much broader field known as human factors or ergonomics.[3]

In 1912 Henry Laurence Gantt developed the Gantt chart which outlines actions the organization along with their relationships. This chart opens later form familiar to us today by Wallace Clark.

Assembly lines: moving car factory of Henry Ford (1913) accounted for a significant leap forward in the field. Ford reduced the assembly time of a car more than 700 hours to 1.5 hours. In addition, he was a pioneer of the economy of the capitalist welfare ("welfare capitalism") and the flag of providing financial incentives for employees to increase productivity.

In 1960 to 1975, with the development of decision support systems in supply such as the Material requirements planning (MRP), you can emphasize the timing issue (inventory, production, compounding, transportation, etc.) of industrial organization. Israeli scientist Dr. Jacob Rubinovitz installed the CMMS program developed in IAI and Control-Data (Israel) in 1976 in South Africa and worldwide.

In the seventies, with the penetration of Japanese management theories such as Kaizen and Kanban, Japan realized very high levels of quality and productivity. These theories improved issues of quality, delivery time, and flexibility. Companies in the west realized the great impact of Kaizen and started implementing their own Continuous improvement programs.

In the nineties, following the global industry globalization process, the emphasis was on supply chain management, and customer-oriented business process design. Theory of constraints developed by an Israeli scientist Eliyahu M. Goldratt (1985) is also a significant milestone in the field.

Compared to other engineering disciplines

Universities offer degrees at the bachelor, masters, and doctoral level.

In the United States the undergraduate degree earned is the Bachelor of Science (B.S.) or Bachelor of Science and Engineering (B.S.E.) in Industrial Engineering (IE). Variations of the title include Industrial & Operations Engineering (IOE), and Industrial & Systems Engineering (ISE). The typical curriculum includes a broad math and science foundation spanning chemistry, physics, mechanics (i.e. statics and dynamics), materials science, computer science, electronics/circuits, engineering design, and the standard range of engineering mathematics (i.e. calculus, differential equations, statistics). For any engineering undergraduate program to be accredited, regardless of concentration, it must cover a largely similar span of such foundational work - which also overlaps heavily with the content tested on one or more engineering licensure exams in most jurisdictions.

The coursework specific to IE entails specialized courses in areas such as systems theory, Ergonomics/safety, Stochastic modeling, optimization, and engineering economics. Elective subjects may include management, finance, strategy, and other business-oriented courses, and for general electives social science and humanities courses. Business schools may offer programs with some overlapping relevance to IE, but the engineering programs are distinguished by a more intensely quantitative focus as well as the core math and science courses required of all engineering programs.