The Ural Federal University named after the first President of Russia B. N. Yeltsin (Russian: Уральский федеральный университет имени первого Президента России Б.Н. Ельцина, Uralʹskiĭ federalʹnyĭ universitet imeni pervogo Prezidenta Rossii B.N. Yelʹtsina, often shortened to UrFU, УрФУ) (formed by a merger of the Ural State Technical University and Ural State University) is one of the leading educational institutions in the Ural region. Ural Federal University acts as a research and innovation center of the Ural region and has close cooperation with the Russian Academy of Sciences. Training of students is carried out in four main areas of knowledge and 108 academic majors.[11] The links between the university and intermediate educational institutions are actively developed. The University also performs consistent work on establishing strategic partnership with employers for the sake of development of the regional economy: employers are involved in the educational environment as direct participants, large-scale enployers-sponsored and corporate education is carried out based on the client-centered approach, joint business projects in economic and social areas are realized. 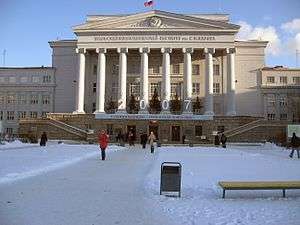 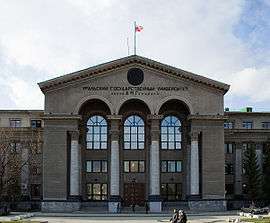 The Ural University is the oldest university in the Ural region. It was established in the town of Ekaterinburg in 1920 by the decree of the head of Soviet revolutionary government Vladimir Lenin. However, the newly-born university underwent a number of changes due to the lack of resources in such circumstances as revolution and civil war. Finally, the university split into two: Ural State University (USU), a smaller university responsible for education in natural sciences, social sciences and humanities, and Ural Polytechnic Institute (USTU-UPI), a larger one which was focused on training engineers in areas such as metallurgy, machine-building, civil engineering and energetics. At the same time, UPI was developing several new (for the time) areas of knowledge like nuclear energetics, organic chemistry and synthesis, and telecommunications.

Despite such partition, both universities were connected closely with each other, as well as with their partners from the region’s industrial economy. Due to this fact, Ekaterinburg became one of the largest university cities of Russia. Since 2008, when a massive reorganization of Russian university system was launched, a number of universities in different cities of the country which already had close relations have received special federal status and additional funding. Federal universities were established in Rostov-na-Donu, Krasnoyarsk, Kazan, Archangelsk, Yakutsk, Kaliningrad, Vladivostok and Ekaterinburg. These federal universities are the leaders of Russian educational system. The merger process of USTU-UPI and USU to create Ural Federal University (UrFU) began in 2009 and was fully completed by the spring of 2011.

During the 95 years of its history, Ural University has produced more than 300,000 graduates, many of whom became successful in research, culture, and politics. One of the most famous graduates of the university is the first President of Russia, Boris Yeltsin, whose name the university bears nowadays.

Structure of the university

Ural Federal University consists of the following Institutes and Departments: 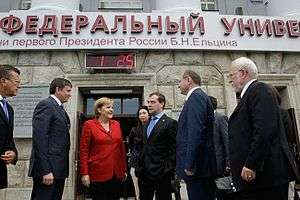 Ural Federal University is one of Russia's biggest research and educational centers. The number of full-time students studying at UrFU exceeds 33,000 (April 2016). They come from 80 countries of the world, and are taught by more than 4,200 teachers. 360 Russian and English-taught educational programs are provided by 17 institutes and include courses in natural sciences, engineering, social sciences, humanities, economics and management. More than 300,000 people have graduated from Ural Federal University over the years. Since 2008, the university has been bearing the name of Boris Yeltsin – graduate of 1955, who was elected first President of independent Russia in 1991.

During an academic year, the university is attended by more than 20 international delegations. Among them – ambassadors of the US, France, United Kingdom, Sweden, The Republic of South Africa, Mongolia and others.

The sport facilities of UrFU allow more than 30 teams to train and compete in different tournaments. University is home to several popular festivals, among which are one of the oldest student festivals of Russia, “Vesna UPI” (literally, “The Ural Polytechnic Spring”), which goes back to 1956, and the Vienna Music Film Festival.

One more important direction of activity is integration of Ural Federal University into the international research and educational environment. The university participates in network educational projects (Shanghai Cooperation Organization, European Union, UNESCO, BRICS). UrFU is a key partner in the Ural region for foreign universities, international organizations, foreign companies and corporations. The number of foreign students, post-graduates, researches and lecturers is constantly growing. UrFU works on the basis of the framework agreements with the market leaders in Russia and foreign countries (Kazakhstan, China etc.)

In 2011, Ural Federal University together with Ariel University Center[12] signed a cooperation agreement with the Skolkovo innovation center known as "Russian Silicon Valley". Following this agreement, the "Center of Israel – Scolkovo" (Israel Skolkovo Gateway) will be formed to give Israeli companies the opportunity to access capital resources and manpower of Scolkovo.[13]

The university has an exchange program with Germany, proposed in a meeting between Russian president Vladimir Putin and German chancellor Angela Merkel.[14] The program’s focus will include each country’s literature and language in the other’s country (i.e., Russian literature and language in Germany, and vice versa). German officials have also participated in the university’s International Strategic Council of UrFU Competitiveness Enhancement Program.[15] The university has also partnered with the Baku Slavic University to build an Azerbaijan Studies Center.[16] 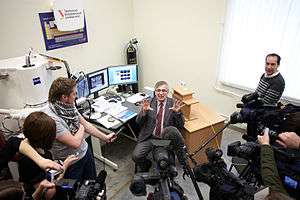 Main directions of scientific research whose results are widely recognized:

UrFU Alumni Association was established in October 2012. In 2012-2013 the University established offices of the Alumni association in Mongolia, Moscow, Nizhny Tagil, Kamensk-Uralsky and Noyabrsk; it allows the graduates living and working in these countries and cities to maintain contact with the university. It also plans to establish offices in Kazakhstan, Kyrgyzstan, Israel and Germany.

The "Dedicatied to Young People" short film, which features Ural Federal University graduates giving advice to the current UrFU students, won the ‘Most Creative Corporate Institution Video’ QS-Apple Creative Award and received the title of QS-Apple Creative Idol. The contest was held on November 17, 2011, at the 7th QS Asia Pacific Professional Leaders in Education Conference and Exhibition, in Manila (Philippines), and was organized by Quacquarelli Symonds.[17]