The President of the Russian Federation (Russian: Президент Российской Федерации, tr. Prezident Rossiiskoi Federatsii) is the elected head of state, Supreme Commander-in-Chief and holder of the highest office within the Russian Federation. However, he is not the head of the executive branch. The Government of Russia is the highest organ of executive power.[3] The current President of Russia is Vladimir Putin.

The Russian President is considered to be one of the world's most powerful political figures, leading the world's biggest country. The role includes being the commander-in-chief of the one of the most expensive military with the largest nuclear arsenal. The office of the president holds significant hard and soft power both in Russia and abroad. The power includes execution of federal law, alongside the responsibility of appointing federal ministers, diplomatic, regulatory and judicial officers, and concluding treaties with foreign powers with the advice and consent of the State Duma and the Federation Council. The president is further empowered to grant federal pardons and reprieves, and to convene and adjourn the Federal Assembly under extraordinary circumstances. The president also directs the foreign and domestic policy of the Russian Federation.

The president is indirectly elected by the people through the Electoral College to a six-year term. The law prohibits anyone from ever being elected to the presidency for a third term. In all, 4 individuals have served 3 presidencies (counting Chernomyrdin's short term as interim president in 1996) spanning 5 full four-year terms. On May 7, 2012, Vladimir Putin became the 4th and current president.

A candidate for office must be a citizen of the Russian Federation who is at least 35 years old and has 'permanently resided' in Russia for at least 10 years.[7]

The Constitution of Russia limits the election of one person to the Presidency to two consecutive terms.[8] Since the constitution contains no ruling on a total number of terms that a President may serve, a former president may seek re-election after sitting out one complete term.

The election of the President is mainly regulated by the Presidential Election Law (PEL) and the Basic Guarantees of Electoral Rights (BGL).[9]

Each faction in the State Duma, the lower house of the Russian parliament has the right to nominate a candidate for the presidential elections. The minimum number of signatures for a presidential candidate fielded by a political party with no parliamentary representation is 100,000, down from 2 million before amendments to the law.[12]

Terms were extended from four to six years in 2008, during Dmitry Medvedev's administration.[13] The President is elected in a two-round system every six years, with a two consecutive term limitation.[14] If no candidate wins by an absolute majority in the first round, a second election round is held between two candidates with the most votes.[14] The last presidential election was in 2012, and the next is expected in 2018.[15]

Vacancies in the office of President may arise under several possible circumstances: death, resignation and removal from office. In all cases when the President is unable to perform his duties, his powers are temporarily transferred to the Prime Minister until the new President takes office.

After the oath of office has been taken by the elected president, these following insignia are handed over to the president. These devices are used to display the rank of his office and are used on special occasions.

The first insignia that is issued is the chain of office with an emblem. The central emblem is a red cross, with arms in equal size, charged with the Russian coat of arms. On the reverse of the cross, the words "Benefit, Honor and Glory" appear in the form of a circle. A golden wreath is used to connect the cross with the rest of the chain. There are 17 "links" in the emblem, with nine consisting of the Russian coat of arms. The other eight consist of a rosette, also bearing the motto "Benefit, Honor and Glory." At the inauguration of Vladimir Putin, the emblem was placed on a red pillow, positioned on the left side of the podium. According to the Presidential website, the emblem is placed inside the Kremlin and is used only on certain occasions.

Special copy of the Constitution

Legal basis of the insignia

These insignia and the procedure were established by the presidential decree 1138 from 5 August 1996.[16] and modified by decree 832 from 6 May 2000.[17] In the new decree the special copy of the Constitution was removed as the third symbol of the Russian Presidency; the other two symbols remained intact because they were and are regulated by separate decrees. Nonetheless, the special copy of the Constitution still exists and serves for inauguration purposes only without being officially presented as a symbol of the Russian Presidency.

Guarantor of the Constitution

The President is highly active in appointing top officials in the country. He nominates candidates for official state positions, who must ultimately be appointed based on parliamentary vote. The President submits nominations to the Federation Council, the upper house of the parliament, for judges of the Constitutional Court, the Supreme Court and the Supreme Arbitration Court, as well as for Prosecutor General of Russia. A proposal to relieve the Prosecutor General of his duties must also be submitted to the Federation Council. The President submits to the State Duma, the lower house of parliament, nominations for appointment to the office of the Chairman of the Central Bank, and likewise submits to the State Duma any proposal to relieve the Chairman of the Central Bank of his duties.[18]

Under the procedure stipulated by the Constitution, the President exercises his right to submit draft legislation, as well as the right to sign bills into law or to veto them.

The President has the right to suspend laws and regulations issued by executive bodies of Russia’s constituent territories if such laws and regulations contravene the Constitution, federal laws or international obligations of the Russian Federation, or violate human and civil rights and liberties, pending the resolution of the issue in an appropriate court.

The president is further empowered to grant federal pardons and reprieves, and to convene and adjourn either or both houses of the Federal Assembly under extraordinary circumstances.

Other powers of the President in the sphere of legal activities and in his interaction with the Parliament include calling elections to the State Duma, dissolving the State Duma in certain cases, and calling referendum.

Under the Constitution, the President is not empowered to determine the full range of short-, middle-, and long-term objectives and targets of domestic policy, but only its basic guidelines. They are to be implemented both by the President himself and by the Government of Russia within the bounds of their authority. The President’ fundamental positions on domestic policy issues are expressed in his written decisions regarding draft federal constitutional laws and draft federal laws, as well as his letters explaining the reasons for rejecting draft federal laws.

Within the bounds of the authority granted to the head of state by the Constitution and other laws, the President also shapes the basic domestic policy guidelines by issuing legal regulations and through organizational and regulatory activity, such as issuing decrees and executive orders. Each year the President is required to make an Address to the Federal Assembly regarding the situation in the country and the internal and foreign policy of the state. 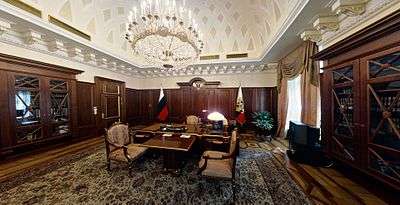 Cabinet of the President of Russia

The primary working President's residence is the Senate building (also known as 1st building) in the Moscow Kremlin complex.[19] Also the President can use the Grand Kremlin Palace (used for official ceremonies and meetings) and so called 14th Administrative Corpus Building[19] (the reserve residence).

Also, the President has several vacation residences outside of Moscow.[20]

None of the Russian presidents to date were ever a member of a political party while in office. In 2012, commenting on stepping down from the post of United Russia party leader, Vladimir Putin said "The constitution doesn’t forbid the president to be a member of any party, but in the spirit of how our political life has evolved, a president is first and foremost a consolidating figure for all the political forces of the country, for all citizens".[21]

National transport services for the Russian President and the Presidential state car are provided by the Special Purpose Garage (SPG).[22] The SPG is a unit within the Federal Protective Service.

Air transport services for the President are provided by the airline company Rossiya Airlines.[23]

The presidential aircraft uses the same colour scheme as standard Rossiya aircraft, except for the use of the Russian coat of arms or the Presidential Standard on the empennage instead of the flag of Russia.

In the spring of 2013 a helipad was constructed in the Moscow Kremlin. According to the Chief of the Kremlin Property Agency construction of a helicopter pad for the President cost 200 million rubles (about $6.4 mln). The helipad is located in the Kremlin's Tainitsky Garden close to exterior walls.[24] 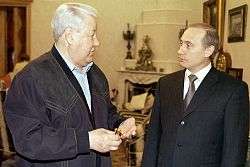 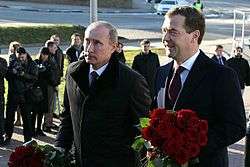 On 16 August 1995, President Boris Yeltsin signed a decree "On some social guarantees of persons holding public positions of the Russian Federation and the position of federal public servants." 15 June 1999 went to President Yeltsin's decree on amendments and additions to the previous decree. On 11 November 1999 Prime Minister Vladimir Putin signed a decree on the implementation of the amended decree of 15 June 1999.

On 31 December 1999, the day of the resignation of Boris Yeltsin, the president issued a decree "On guarantees of the Russian Federation President, stop exercising his powers, and his family," and the eponymous federal law was adopted by 25 January 2001.

This law establishes the legal, social and other guarantees of the Russian Federation President, stop the execution of its powers in connection with the expiration of his term of office or in advance in the event of his resignation or permanent incapacity for health reasons to exercise the powers belonging to him and his family:

Beginning in 1999, all living former presidents were granted a pension, an office, and a staff. The pension has increased numerous times. Retired presidents receive a pension based on the salary of the government. All former presidents, their spouses, and their children until age 16 are protected by the Federal Protective Service until the president's death. A spouse who remarries or divorced from president is no longer eligible for Federal Protective Service protection.

As of December 2016, there is only one living former president (except Vladimir Putin, who was president from 2000 to 2008, and became president again in 2012) – Dmitry Medvedev.

Attribution note: Material from the powers and duties section of this article was originally published by the website of the Office of the President of Russia.