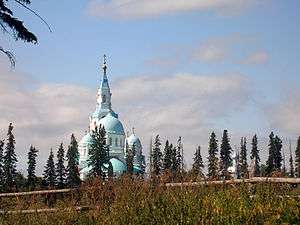 The Valaam Monastery, or Valamo Monastery is a stauropegic Orthodox monastery in Russian Karelia, located on Valaam, the largest island in Lake Ladoga, the largest lake in Europe.

It is not clear when the monastery was founded. As the cloister is not mentioned in documents before the 16th century, different dates - from 10th to 15th centuries - have been expounded. According to one tradition, the monastery was founded by a 10th-century Greek monk, Sergius of Valaam, and his Karelian companion, Herman of Valaam. Heikki Kirkinen inclines to date the foundation of the monastery to the 12th century.[1][2] Contemporary historians consider even this date too early. According to the scholarly consensus, the monastery was founded at some point towards the end of the 14th century.[3] John H. Lind and Michael C. Paul date the founding to between 1389 and 1393 based on various sources, including the "Tale of the Valaamo Monastery," a sixteenth-century manuscript, which has the monstery founded during the archiepiscopate of Ioann II of Novgorod.[4]

The Valaam monastery was a northern outpost of the Eastern Orthodox Church against pagans and, later, a western outpost against the Catholic Church from Tavastia, Savonia and Karelia Province. The power struggle between Russians and Swedes pushed the border eastwards in the 16th century; in 1578 the monastery was attacked and numerous monks and novices were killed by the Lutheran Swedes. The monastery was desolate between 1611 and 1715 after another attack of the Swedes, the buildings being burnt to the ground and the Karelian border between Russia and Sweden being drawn through Lake Ladoga. In the 18th century the monastery was magnificently restored, and in 1812 it came under the Russian Grand Duchy of Finland.

The rebuilt church, now in Karelian/Zaonezh’e style, of Prophet Elijah’s skete on Lembos Island, ca. 10 km to the east of the main monastery, in the chain of islands extending towards the mainland in the east.

The territory was fought over by the Soviet Union and Finland during World War II. Due to the Winter War, the monastery was evacuated in 1940, when 150 monks settled in Heinävesi in Finland. This community still exists as New Valamo Monastery in Heinävesi. Having received evacuees from the Konevsky Monastery and Pechenga Monastery, it is now the only monastery of the Finnish Orthodox Church. From 1941-44, during the Continuation War, an attempt was made to restore the monastery buildings at Old Valaam, but later the island served as a Soviet military base.

Since the original Valaam Monastery was bequeathed back to the Orthodox Church in 1989, it has been enjoying the personal patronage of Patriarch Alexy II of Moscow, who frequented the cloister when a child. The monastery, whose buildings have been meticulously restored, has gained significant legal power over the island, in a push to return to a state of spiritual seclusion. After years of fruitless legal proceedings with the monastery, many residents of the island chose to leave, though a few still remain. The present Father Superior of the community is Bishop Pankraty (Zherdev) of Troitsk.

The Skete of Smolensky on the Valaam (Valamo)

The Skete of All Saints on the Valamo. Karelia, Russia 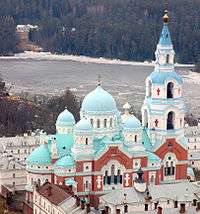 Saviour Transfiguration Cathedral, the main cathedral of the monastery.

The monastery of Valaam has a unique tradition of singing,[5] called the Valaam chant, that combines some features of Byzantine and Znamenny chants.

As in Byzantine chant, the singing is always 2-parts, comprising a melody and an ison, but, as in Znamenny chant, the scale structure is always diatonic, the ornamentation is simplified in comparison with Byzantine chant, and the melodies are more similar to that of ancient Znamenny Chant, at the edge of being considered a local variety of this tradition.[6] This relative simplicity became one of the reasons for the experimental introduction of Valaam chanting in various parishes across Russia by the end of 20th century.

The monastery has a professional five-strong male-voice choir which tours the world to raise money for the ongoing restoration of the buildings. Some of its music can be heard at the monastery's website.[7]

On the morning of 1 May 2016, Orthodox Easter Sunday, a blaze covering some 800 square meters erupted on the monastery's property, inside the “Winter Hotel", constructed in the 1850s, a national heritage site. Belonging to the Valaam monastery, the building is right next to the monastery's main cathedral. There were no casualties in the incident, emergency services reported.[8]