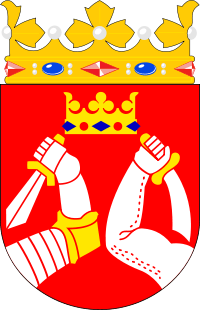 Coat of arms of the Province of Karelia 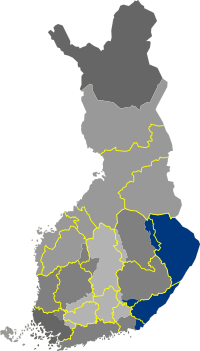 The parts of historical province of Karelia included in modern Finland(the borders of modern provinces with yellow colour and the modern border of Finland, same as at the signing moment of final act of CSCE 1975)

Karelia is a historical province of Finland (historically also known as Swedish Karelia, when Finland was part of the Swedish Realm). It refers to the Western Karelia that during the second millennium has been under western dominance, religiously and politically. Western, i.e. Finnish Karelia is separate from Eastern, i.e. Russian Karelia, which was dominated by Novgorod and its successor states from the 12th century onwards.

The name is Karjala in Finnish and Karelen in Swedish. Karelia borders on Uusimaa, Savonia and Ostrobothnia. It is also bounded by Russia and the Gulf of Finland.

Parts of the historical province of Karelia are divided between the Regions of North Karelia and South Karelia as well as smaller parts of Kymenlaakso and Northern Savonia.

During the 13th century, Karelia was still undivided and fought over between the Novgorod Republic and Sweden. Karelians were listed as Novgorodian allies in the mid-12th century in Russian Chronicles. The "Third Swedish crusade", led by the marshal Torgils Knutsson, which took place between 1293 and 1295, resulted in the western parts of Karelia coming under Swedish rule, and the building of the Castle of Viborg.

Hostilities continued in 1300 when a Swedish force attacked the mouth of the River Neva and built a fort near the current location of Saint Petersburg. The fort was destroyed the following year by the Novgorodians. Indecisive fighting in 1321 and 1322 led to negotiations and peace by the Treaty of Nöteborg which for the first time decided the border between Sweden and Novgorod. Sweden got territory around Viborg, the western Karelian Isthmus and South Karelia; and Novgorod got the eastern Karelian Isthmus, Ingria, Ladoga Karelia, North Karelia and East Karelia.

In 1617 Sweden conquered Kexholm County (eastern Karelian Isthmus, Ladoga Karelia and North Karelia) from Russia. In 1634 Savonia and old Swedish Karelia were incorporated in the Viborg and Nyslott County. After the Treaty of Nystad in 1721 eastern parts of the Viborg and Nyslott County and the Kexholm County were ceded to Russia. The rest of these counties were incorporated into the Kymmenegård and Nyslott County. The southeastern part of this county was also ceded to Russia in the Treaty of Åbo of 1743. After the conquest in 1809 of the rest of Finland, Russia's 18th century gains, called "Old Finland", were in 1812 joined to the Grand Duchy of Finland as a gesture of good will (see Viipuri Province).

A large part of Finnish Karelia was ceded by Finland to the Soviet Union in 1940 after the Soviet aggression known as the Winter War when the new border was established close to that of 1721. During the Continuation War of 1941-44, most of the ceded area was liberated by Finnish troops, but in 1944 was occupied again by the Red Army. After the war, the remains of the Province of Viipuri were made into the Province of Kymi. In 1997 the province was incorporated within the province of Southern Finland.

Western Karelia, as a historical Province of Sweden, was religiously and politically distinct from the eastern parts that were under the Russian Orthodox Church. Following the fall of the Soviet Union the long-silenced debate over returning Karelia from Russia to Finland resurfaced in Finland.

The traditional culture of "Ladoga-Karelia", or Finnish Karelia according to the pre-Winter War borders, was by and large similar to that of Eastern Karelia, or Russian Karelia. Karelians live, and did even more so before Stalinism and the Great Purges, also in vast areas east of Finland (in Eastern Karelia, not marked on the map to the right), where folklore, language and architecture during the 19th century was in the center of the Finns' interest (see Karelianism), representing a "purer" Finnish culture than that of Southern and Western Finland, which had been for thousands of years in more contact with (or "contaminated by") Germanic and Scandinavian culture, of which the Kalevala and Finnish Art Nouveau are expressions.

Main article: Coat of arms of the Province of Karelia

The arms is crowned by a ducal coronet, though by Finnish tradition this more resembles a Swedish count's coronet. The symbolism of the coat of arms is supposed to represent how the region was fought over by Sweden and Russia for centuries. Blazon: "Gules, in center chief a crown or above two duelling arms, the dexter armored holding a sword and the sinister chain-mail armored with a scimitar, all argent except for hafts and gauntlet joint or."