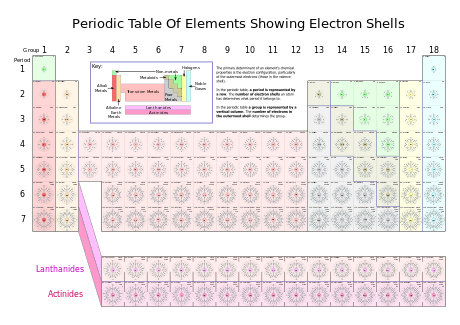 In chemistry and atomic physics, an electron shell, or a principal energy level, may be thought of as an orbit followed by electrons around an atom's nucleus. The closest shell to the nucleus is called the "1 shell" (also called "K shell"), followed by the "2 shell" (or "L shell"), then the "3 shell" (or "M shell"), and so on farther and farther from the nucleus. The shells correspond with the principal quantum numbers (n = 1, 2, 3, 4 ...) or are labeled alphabetically with letters used in the X-ray notation (K, L, M, …).

The electrons in the outermost occupied shell (or shells) determine the chemical properties of the atom; it is called the valence shell.

The shell terminology comes from Arnold Sommerfeld's modification of the Bohr model. Sommerfeld retained Bohr's planetary model, but added mildly elliptical orbits (characterized by additional quantum numbers ℓ and m) to explain the fine spectroscopic structure of some elements.[3] The multiple electrons with the same principal quantum number (n) had close orbits that formed a "shell" of positive thickness instead of the infinitely thin circular orbit of Bohr's model.

The existence of electron shells was first observed experimentally in Charles Barkla's and Henry Moseley's X-ray absorption studies. Barkla labeled them with the letters K, L, M, N, O, P, and Q.[4] The origin of this terminology was alphabetic. A "J" series was also suspected, though later experiments indicated that the K absorption lines are produced by the innermost electrons. These letters were later found to correspond to the n values 1, 2, 3, etc. They are used in the spectroscopic Siegbahn notation.

The physical chemist Gilbert Lewis was responsible for much of the early development of the theory of the participation of valence shell electrons in chemical bonding. Linus Pauling later generalized and extended the theory while applying insights from quantum mechanics.

The electron shells are labeled K, L, M, N, O, P, and Q; or 1, 2, 3, 4, 5, 6, and 7; going from innermost shell outwards. Electrons in outer shells have higher average energy and travel farther from the nucleus than those in inner shells. This makes them more important in determining how the atom reacts chemically and behaves as a conductor, because the pull of the atom's nucleus upon them is weaker and more easily broken. In this way, a given element's reactivity is highly dependent upon its electronic configuration.

Each shell is composed of one or more subshells, which are themselves composed of atomic orbitals. For example, the first (K) shell has one subshell, called 1s; the second (L) shell has two subshells, called 2s and 2p; the third shell has 3s, 3p, and 3d; the fourth shell has 4s, 4p, 4d and 4f; the fifth shell has 5s, 5p, 5d, and 5f and can theoretically hold more but the 5f subshell, although partially occupied in actinides, is not filled in any element occurring naturally.[2] The various possible subshells are shown in the following table:

Although it is commonly stated that all the electrons in a shell have the same energy, this is an approximation. However, the electrons in one subshell do have exactly the same level of energy,[6] with later subshells having more energy per electron than earlier ones. This effect is great enough that the energy ranges associated with shells can overlap (see valence shells and Aufbau principle).

Number of electrons in each shell

Each subshell is constrained to hold 4ℓ + 2 electrons at most, namely:

However, this is a simplification of the truth. The electrons that determine how an atom reacts chemically are those that travel farthest from the nucleus, that is, those with the highest energy. For the transition elements, the partially filled (n − 1)d energy level is very close in energy to the ns level[10] and hence the d electrons in transition metals behave as valence electrons although they are not in the so-called valence shell.

The list below gives the elements arranged by increasing atomic number and shows the number of electrons per shell. At a glance, one can see that subsets of the list show obvious patterns. In particular, the seven elements (in   electric blue) before a noble gas (group 18, in   yellow) higher than helium have the number of electrons in the valence shell in arithmetic progression. (However, this pattern may break down in the seventh period due to relativistic effects.)

Sorting the table by chemical group shows additional patterns, especially with respect to the last two outermost shells. (Elements 57 to 71 belong to the lanthanides, while 89 to 103 are the actinides.)

The list below is primarily consistent with the Aufbau principle. However, there are a number of exceptions to the rule; for example palladium (atomic number 46) has no electrons in the fifth shell, unlike other atoms with lower atomic number. Some entries in the table are uncertain, when experimental data is unavailable. (For example, the elements past 108 have such short half-lives that their electron configurations have not yet been measured.)