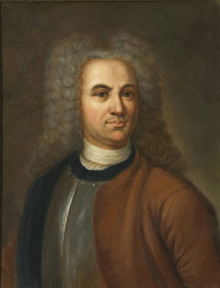 Vasily Nikitich Tatishchev (Russian: Васи́лий Ники́тич Тати́щев) (April 19, 1686 – July 15, 1750) was a prominent Russian statesman, and ethnographer, best remembered as the author of the first full-scale Russian history. Throughout this work, he advocates his favourite idea that autocracy is the perfect form of government for Russia.

A male-line descendant of the 9th-century prince Rurik, Tatischev was born near Pskov on April 19, 1686. Having graduated from the Engineering school in Moscow, he took part in the 1700-1721 Great Northern War with Sweden. In the service of Peter the Great he gained a prominent post in the Foreign Office, which he used to oppose the policies of the Supreme Privy Council and support Anna's ascension to the Russian throne in 1730.

He was entrusted by Anna with a lucrative office of the management of Ural factories. At that post he founded the cities of Perm and Yekaterinburg, which have since grown into the veritable capitals of the Urals. A monument to him was opened in Perm in 2003. During the Bashkir War of 1735-40 he was in command of Siberian operations from the winter of 1736-37 and head of the whole operation from the spring of 1737. He was removed from command after March 1739, nominally on charges of corruption, but mainly because he had made too many enemies. Tatischev finished his official career as a governor of Astrakhan (1741-44). He died at the Boldino estate near Moscow on July 15, 1750.

Having retired from active service, the elderly statesman dedicated himself to scholarly pursuits. Feeling that the Russian historiography had been neglected, he discovered and published several legal monuments of great interest, e.g., Russkaya Pravda and Sudebnik of 1550. His magnum opus was the first sketch of Russian history, entitled Russian History Dating Back to the Most Ancient Times and published in 5 volumes after his death. He also compiled the first encyclopedic dictionary of the Russian language.

The scientific merits of Tatischev's work were disputed even in the 18th century. It is true that he used some chronicles that have since been lost, leading Iakov Lur'e to write of "Tatishchev Information," which he defined as "data unique to that historian,"[1] but most of them (notably the Ioachim Chronicle) were of dubious authenticity. It is also true that he could never tell a genuine work from a fake, and some incidents inserted in his history could have been products of his own fancy. Only recently some prominent historians have demonstrated that Tatischev's lost sources may actually be relied on.

A settlement and a district in Saratov Oblast are named after Tatishchev. There are monuments to Tatishchev in Perm and Yekaterinburg and in 1998 a large equestrian statue of Tatishchev was estasblished in Tolyatti.