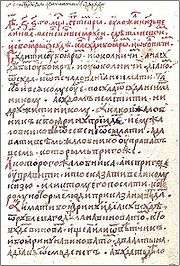 The Sudebnik of 1497 (Судебник in Russian, or Code of Law) was a collection of laws introduced by Ivan III in 1497. It played a big part in the centralisation of the Russian state, creation of the nationwide Russian Law and elimination of feudal division.

It took its roots from Old Russian Law, including Russkaya Pravda, Legal Code of Pskov, princely decrees, and common law, the regulations of which had been upgraded with reference to social and economic changes. Basically, Sudebnik was a collection of legal procedures. It established a universal system of the judicial bodies of the state, defined their competence and subordination, and regulated legal fees. Sudebnik expanded the range of acts, considered punishable by the standards of criminal justice (e.g., sedition, sacrilege, slander). It also renewed the concept of different kinds of a crime. Sudebnik established the investigative nature of legal proceedings. It provided different kinds of punishment, such as death penalty, flagellation etc. In order to protect the feudal landownership, Sudebnik introduced certain limitations in the law of estate, increased the term of limitation of legal actions with regards to princely lands, introduced flagellation for the violation of property boundaries of princely, boyar and monastic lands - violation of peasant land boundaries entailed a fine. Sudebnik also introduced a fee (пожилое, or pozhiloye) for peasants who wanted to leave their feudal lord (Крестьянский выход, or Krestiyansky vykhod), and also established a universal day (November 26) across the Russian state for peasants, who wanted to switch their masters (Юрьев день, or Yuri’s Day).