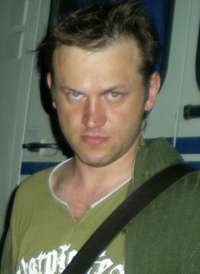 Vassily Vladimirovich Sigarev (Russian: Васи́лий Владимирович Си́гарев, born 11 January 1977, Upper Salda, Sverdlovsk Oblast, Soviet Union) is a Russian playwright, screenwriter and film director. His plays Plasticine, Black Milk and Ladybird were first produced in the West by the Royal Court Theatre, in 2002, 2003 and 2004, respectively.[1][2] In 2002, Sigarev was named the winner of the Charles Wintour Award for Most Promising Playwright given out by the Evening Standard for Plasticine.

Sigarev was born in 1977, in Upper Salda, Sverdlovsk Oblast. He studied at the Nizhny Tagil Pedagogical Institute and graduated from the Yekaterinburg Theatre Institute.[3]

The subject matter of Sigarev's plays is the decay of post-Soviet Russia. Plasticine deals with child rape, Black Milk features a husband and wife team of con men in an abusive relationship, while the main characters of Ladybird steal cemetery markers to sell them to raise money for booze.

Ladybird had its American premiere at The Bootleg Theatre in Los Angeles in 2007.[4]

Sigarev's work had not been seen in New York until a production of Black Milk was produced Off-Broadway in July 2012, at the 13th Street theater. Directed by Columbia M.F.A. student Michel Hausmann, the production received mixed reviews.[5] Alexis Soloski of the Village Voice called it an ..."unnuanced, indifferently acted production",[6] while Frank Scheck of the New York Post gave the play two out of four stars. He wrote "...the writing doesn’t live up to its provocative elements, with long stretches of tedium diffusing the impact."[7] nytheatre.com called it "strong piece of theatre, taking its audience headfirst into a deserted wasteland of fear, confused morals and a profound fall from purity. With resonating performances, impeccable design and a truthful directorial vision"[8]

Sigarev has directed two films, Volchok, which was made in 2009 and which he adapted from his own play, and Zhit (Living) (2012). He also wrote the screenplay for Prodayotsya detektor lzhi (2005), which is based on his plays Detektor lzhi and Fantomnye boli.

Sigarev lives in Yekaterinburg and is married to Russian actress Yana Troyanova.