For the Chittiannavaram Temple in madanapalle, see Chitti annavaram. For the Tollywood film, see Annavaram (film).

Annavaram is a village situated on the banks of the pampa river in the East Godavari district of the Indian state of Andhra Pradesh.[2]

Anna translates to "what you desire", while "varam" means boon or godsend. Hence, the name Annavaram is an expression of the belief that the deity will endow one with whatever one desires. 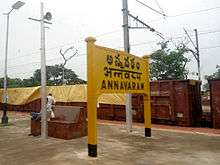