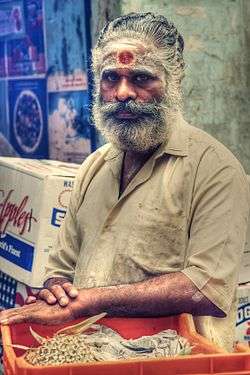 Vibhuti (Sanskrit: विभूति; vibhūti), also called Bhasma (ash), Thiruneeru and Vibhooti, is a word that has several meanings in Hinduism.[1] Generally, it is used to denote the sacred ash which is made of burnt dried wood in Āgamic rituals. Hindu devotees apply vibhuti traditionally as three horizontal lines across the forehead and other parts of the body to please the god Shiva. Vibhuti smeared across the forehead to the end of both eyebrows is called Tripundra.