Maha Shivaratri is a Hindu festival celebrated annually in honour of the god Shiva. There is a Shivaratri in every lunary month on its 13th night /14th day, but once a year in late winter (February/March) and before the arrival of spring, marks Maha Shivaratri which means "the Great Night of Shiva".[2][3]

It is a major festival in Hinduism, but one that is solemn and marks a remembrance of "overcoming darkness and ignorance" in life and the world. It is observed by remembering Shiva and chanting prayers, fasting, doing Yoga and meditating on ethics and virtues such as self-restraint, honesty, noninjury to others, forgiveness and the discovery of Shiva.[3] The ardent devotees keep awake all night. Others visit one of the Shiva temples or go on pilgrimage to Jyotirlingams. This is an ancient Hindu festival whose origin date is unknown.[3]

Unlike most Hindu festivals which are celebrated during the day, Maha Shivaratri is celebrated at night. The celebration includes maintaining a "jaagaran", an all-night vigil and prayers, because Shaiva Hindus mark this night as "overcoming darkness and ignorance" in one's life and the world through Shiva. Offerings of fruits, leaves, sweets and milk to Shiva are made, some perform all-day fasting with vedic or tantrik worship of Shiva, and some perform meditative Yoga.[4] In Shiva temples, "Om Namah Shivaya", the sacred mantra of Shiva, is chanted through the day.

Maha Shivaratri is celebrated over three or ten days based on the Hindu luni-solar calendar.[2] Every lunar month, there is a Shivaratri (12 per year). The main festival is called Maha Shivaratri, or great Shivaratri, and this is on 13th night (waning moon) and 14th day of the month Phalguna (Magha). According to the Gregorian calendar, the day falls in either February or March.[2] 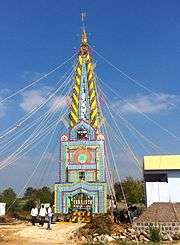 Mahasivaratri is observed in the night, usually in lighted temples or specially prepared prabha (above).

The Mandi fair is particularly famous as a venue for Maha Shivaratri celebrations; it transforms the town of Mandi as devotees pour in. It is believed that all gods and goddesses of the area, said to number more than 200, assemble here on the day of Maha Shivaratri. Mandi, located on the banks of Beas, is popularly known as the "Cathedral of Temples" and one of the oldest towns of Himachal Pradesh, with about 81 temples of different Gods and Goddesses on its periphery.[5][6][7]

Maha Shivaratri is the most important festival in Kashmir Shaivism. It is celebrated as the anniversary of the marriage of Shiva and Parvati. The festivities start 3 or 4 days before Maha Shivaratri and continue for two days after it.

Central India has a large number of Shiva followers. The Mahakaleshwar Temple, Ujjain is one of the most venerated shrines consecrated to Shiva where a large congregation of devotees gathers to offer prayers on the day of Maha Shivaratri. Tilwara Ghat in the city of Jabalpur and the Math Temple in the village of Jeonara, Seoni are two other places where the festival is celebrated with much religious fervour.

Maha Shivaratri is celebrated widely in the temples all over Maharashtra, Andhra Pradesh, Karnataka, Kerala, Tamil Nadu and Telangana.

Maha Shivaratri is celebrated widely in the temples all over Nepal but especially in the Pashupatinath temple. Thousands of devotees visit the famous Shiva Shakti Peetham nearby as well. The Nepalese army parades around the city of Kathmandu to pay tribute to Lord Shiva, and holy rituals are performed all over the nation. Artists from various classical music and dance forms perform through the night. On Maha Shivaratri, married women pray for the well being of their husbands, unmarried women pray for a husband like Shiva, considered as the ideal husband. Shiva is also worshipped as the Adi Guru (first teacher) from whom the yogic tradition originates.[8]

Maha Shivaratri is the main Hindu festival among the Shaiva Hindu diaspora from Nepal and India. In Indo-Caribbean communities, thousands of Hindus spend the auspicious night in over four hundred temples across the country, offering special jhalls (an offering of milk and curd, flowers, sugarcane and sweets) to Lord Shiva.[9] In Mauritius, Hindus go on pilgrimage to Ganga Talao, a crater-lake.