For other uses of "Durga", see Durga (disambiguation).

Durga is the form of Mother goddess in Shaktism. There are many incarnations of Goddess Durga: Kali, Renuka (or Renu), Bhagvati, Bhavani, Ambika, Lalita, Kandalini, Jaya, Rajeswari and has nine appellations: Skandamata, Kushmanda, Shailaputri, Kaalratri, Brahmacharini, Katyayani, Chandraghanta and Siddhidatri.[2] A list of 108 names that is used to describe her is very popularly in use by eastern Hindus and is called Ashtottara Shatanamavali of Goddess Durga.[3]

The historian Ramaprasad Chanda wrote in 1916, the following treatise about the ideological development of Goddess Durga from primitive goddess to her current form: [4]

"...it is possible to distinguish two different strata – one primitive and the other advanced. The primitive form of Durga (Parvati) is the result of syncretism of a mountain-goddess worshiped by the dwellers of the Himalaya and the Vindhyas, a goddess worshiped by the Abhiras, a vegetation spirit conceived as female and a war-goddess. As her votaries advanced in civilization the primitive war-goddess was transformed into the personification of the all-destroying time (Kali), the vegetation spirit into the primordial energy (Adya Sakti) and the saviouress from samsara (cycle of rebirths) and gradually brought into line with the Brahmanic mythology and philosophy...."

The Devi Puranas state that Durga is the warrior manifestation of Goddess Adishakti. Durga means the Invincible One. Therefore, Goddess Adishakti is the Divine Mother of the Universe who had taken birth on Earth as Parvati to win and woo Shiva. Lalita Sahasranamam bestows Durga as a name of her indicating that Lalita is none other than a form of Maa Adishakti Parvati.

Durga is the supreme soul, otherwise called Shakti (primordial cosmic energy). As such, she is the original cause of all the present or past worldly occurrences. From Durga, all phenomenon of creation, existence and destruction is generated through the emergence of two triads of Supreme Powers:

Different terms all referring to the same concept referenced above are Adhyashakti, Paramatma Shakti or Ati Prakrutika Shakti. Durga is believed to create and control two types of power:

Durga, as the Mother of the Universe, provides man with the opportunity for salvation and enjoyment of life. Vyasa, the eminent sage and poet of the Devi-Bhagavata Purana, has aptly stated "Rudrahinam Vishnuhinam na vadanti janastatha Shaktihinam Yathasarbe probodhanti Naradhamam". This verse translates loosely as "Powerless persons are despised as mean persons. So, by being devoted to the Supreme, we should be strong and powerful by her grace."

The Shiva Purana gives an account of the origin of Durga. At the beginning of time, Shiva invoked Durga, the primordial energy from his left half to create. Together they created their eternal abode, Shivaloka, also known as Kashi. Thereafter, they created Vishnu and Brahma. 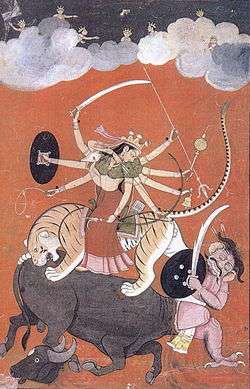 Durga on a tiger

As per the Shiva Purana and Devi Mahatmya, Mahishasura, son of demon Rambha, unleashed a reign of terror on earth. When the gods intervened, Mahishasura defeated them, banishing them from heaven.

The vanquished gods went to the Trimurti - Brahma, Vishnu and Maheshwara. As they narrated their woeful tale, an immense mass of light manifested from Lord Vishnu's mouth. This was joined by similar rays that emerged from the enraged faces of gods. This mass of light transformed into a woman. The gods bestowed gifts of divine weapons to this woman who was Adi Parashakti manifested as Durga, to slay Mahishasura.

Other sources say that Durga did not arise from the Devas as she was a form of Goddess Adishakti. The Mother took birth on Earth as Parvati to be united with her lord, Shiva. After marriage, Shiva helps Parvati realize and gain control of her powers as Adi-shakti, the pure energy of the universe. Later on, she slays Mahishasura as Durga and Raktabija as Kali.

Armed with celestial weapons gifted by the deities and decked with divine ornaments, Durga rode into the battle field and challenged the demons for battle. Mahishasura's entire army, led by demons like Chikshur, Chamar, Asiloma, Vidalaksha, Durdhara, Durmukha, Mahahanu and many more, attacked Durga simultaneously. But Durga slew all of them with unparalleled fearlessness. An enraged Mahishasura attacked Durga in the guise of a buffalo. But Durga bound him in this form with ropes. The buffalo then morphed into a lion and leapt on Durga, but she beheaded it with her sword. At this, Mahishasura began to fight with his sword. Durga pinned him down with a torrent of arrows. Mahishasura assumed the form of a giant elephant and tugged at Durga's mount, itself a lion. Durga lopped off the trunk of the elephant with her sword and freed her lion. The elephant turned into a buffalo and charged at Durga. Durga flung her trident and beheaded Mahishasura, finally killing him. 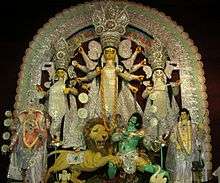 A traditional Durga idol at a pandal in Kolkata.

The ten-day-long Durga Puja is the biggest annual festival in Bengal, Odisha, Assam, Jharkhand and Nepal, where it is known as Dashain. Dashain is the longest national holiday of Nepal. In Dashain, Durga is worshipped in ten forms(Kushmanda, Chandraghanta, Brahmacharini, Shailaputri, Skandamata, Katyayani, Kalaratri, Mahagauri, Mahakali and Durga) with one form for each day in Nepal. It is celebrated likewise with much fervour in various parts of India, especially the Himalayan region, but is celebrated in various forms throughout India and the world. 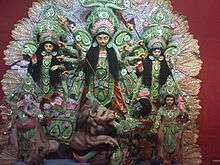 The day of Durga's victory is celebrated as Vijayadashami(Bijoya in Bengali), Dashain(Nepali) or Dussehra(in Hindi) – these words literally mean "the Victory on the Tenth(day)".[5]

In Andhra Pradesh, she is also worshipped as Kanaka Durgammathalli, where there is also famous temple for Goddess Kanaka Durga in Indrakeeladri, Vijayawada. She is also known by the name of Chandi Bhavani.

In Kashmir she is worshipped as Shaarika(the main temple is in Hari Parbat in Srinagar).

The actual period of the worship however may be on the preceding nine days(Navaratri) followed by the last day called Vijayadashami in North India or five days in Bengal(from the sixth to tenth day of the waxing-moon fortnight).[6] Nine aspects of Durga known as Navadurga are meditated upon, one by one during the nine-day festival by devout Shakti worshippers. Durga Puja also includes the worship of Shiva, who is Durga's consort, in addition to Lakshmi, Saraswati, Ganesha and Kartikeya, who are considered to be Durga's children.[7] Worship of Mother nature is done, through nine types of plant(called Kala Bou), including plantain(banana) tree, which represent nine divine forms of Goddess Durga.[8] In South India, especially Andhra Pradesh, Dussera Navaratri is also celebrated and the goddess is dressed each day as a different devi – Shailputri, Bramhacharini, Chandraghanta, etc. – for the nine days.

In Telangana, people celebrate Bathukamma, a flower festival during Navarathri, to honour the life-giver goddess Bathukamma(Durga) with the belief that if young girls pray with devotion, their wishes of getting a good spouse will be fulfilled. On the other hand, married women seek Durga's blessings for prosperity and good year. Women folk arrange flowers in concentric layers to form conical shape and place Durga, made out turmeric on top. Bathukamma is a cultural icon of Telangana.

In North India, the tenth day, is celebrated as Vijayadashami, the day Rama emerged victorious in his battle against the demon, Ravana. Gigantic straw effigies of Ravana are burnt in designated open spaces(e.g. Delhi's Ram Lila grounds), watched by thousands of families and little children.

In Mysore in Karnataka, Durga is worshipped as Chamundeshwari, the patron goddess of the city during Dasara( dussehra) as it is believed that she saved all the people here from Mahishasura, the buffalo demon, who terrorised them. Hence, the city, the then larger region comprising other Kannada regions, got the name Mysoru after Goddess Mahishasura Mardhini(i.e. slayer of the demon Mahishasura).

In Gujarat, it is celebrated as the last day of Navaratri, during which the Garba dance is performed to celebrate the victory of Durga over Mahishasura.

Durga is worshipped in her peaceful form as Maha Gauri, The Fair Lady. Shantadurga also known as Santeri, the patron Goddess of Goa. She is worshipped by all Goan Hindus.

In Maharashtra, Tulja Bhavani, Hedavde Mahalaxmi and Ambabai are worshipped as Mahishasura Mardini and considered the patron goddess of the land. Bhavani is known as Tulaja, Amba,[9] Renuka, Yamai, Saptshrungi and Jogai in different places of Maharashtra. She is the inspirational goddess of Raja Shivaji. As per legends, Bhavani appeared after Shivaji prayed to her and blessed him to be able to make Hindustan or the then India(ruled by the Mughals) independent – the kingdom he established eventually became the Hindu Pad Padshahi(sometimes also called the Maratha Empire), which comprised all the land ruled by the Mughals and brought India back under Hindu sovereignty.

In Bangladesh also, the four-day long Sharadiya Durga Puja is the biggest religious festivals for the Hindus and celebrated across the country with Vijayadashami being a national holiday.

The prominence of Durga Puja increased gradually during the British Raj in Bengal.[10] After the Hindu reformists identified Durga with India, she became an icon for the Indian independence movement. 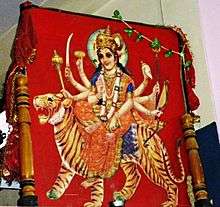 Image of Durga in a small temple next to Rewalsar Lake, Himachal Pradesh, India

Some early Western accounts refer to a deity known as Deumus, Demus or Deumo. Western(Portuguese) sailors first came face to face with the murti of Deumus at Calicut on the Malabar Coast and they concluded it to be the deity of Calicut. Deumus is sometimes interpreted as an aspect of Durga in Hindu mythology and sometimes as deva.

It is described that the ruler of Calicut(Zamorin) had a murti of Deumus in his temple inside his royal palace.[14][15] The temple was two paces wide in each of the four sides and three paces high, with a wooden door covered with gods carved in relief. At the centre of the temple, there was a metal idol of Deumus placed in a seat, which was also made of metal.