Vice President of the Philippines

Bearing similarities with the office as created in the 1935 Constitution before that Constitution was abolished by the Marcos regime, the current office of the Vice President was re-established under the 1987 Constitution.

The official title of the office in Filipino is Pangalawang Pangulo, although Bise Presidente, derived from Spanish, is the usual title used in some of the major Philippine languages, such as Cebuano. 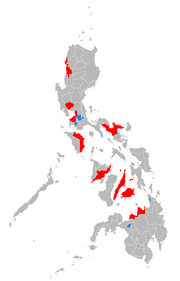 Home provinces of the vice presidents.

The first known vice president claiming to be part of a government was Mariano Trías, whose term started on March 22, 1897. He was elected during the elections of the Tejeros Convention, and was later elected vice president of the Supreme Council that oversaw negotiations for the Biak na Bato pact in 1897. This Supreme Council had no sovereignty, did not govern any state, and was just used for bargaining with the Spanish. This council was replaced later, with no such position existing during the country's declaration of independence in 1898, which had a dictatorial government. Officially, the country's first actual republic was founded in 1899, and it too had no vice president. Trias instead served in the cabinets of Apolinario Mabini and Pedro Paterno, as finance minister and war minister, respectively. Trias is not considered a Philippine Vice President as the Supreme Council did not proclaim any sovereign state.

The 1935 Constitution of the Philippines established the position of Vice President, and may be appointed by the President to a cabinet position. The first person elected to the position of Vice President under the constitution was Sergio Osmeña. Elected together with Manuel L. Quezon in the first Philippine national elections, Osmena was given the highest-ranking cabinet portfolio with inauguration of the Commonwealth of the Philippines in November 1935. Prior to independence in 1946, that cabinet portfolio was Secretary of Public Instruction, which had once been reserved only for the Vice Governor-General (an American). Vice President Osmena held that position from 1935–1939, and a similar portfolio in the War Cabinet during World War II.

Among the Vice Presidents of the Third Republic, Diosdado Macapagal alone was not given any cabinet position, since he was the first elected Vice-President that did not originate from the same party as the incumbent. Arturo Tolentino was officially proclaimed Vice President-elect by the Regular Batasang Pambansa in 1986. He took his oath as Vice President on February 16, 1986 before Chief Justice Ramon Aquino but because of popular belief that the elections had been rigged, he never actually served out his term as Vice President. Within a week after Tolentino's oath, the People Power Revolution resulted in the collapse of the Marcos regime. On February 25, 1986 Corazon Aquino and Salvador H. Laurel were sworn in as President and Vice President.[1]

The office of Vice President was abolished and not included in the original version of the 1973 Constitution. It was, however, reinstated in subsequent amendments, just before the snap elections in 1986 that led to the People Power Revolution that installed Corazon Aquino into the Presidency.

Article 7, Section 3 of the Constitution mandates that the Vice President must bear the same qualifications as the President which means he must be:

The Vice President is barred from serving more than two consecutive terms.[4] 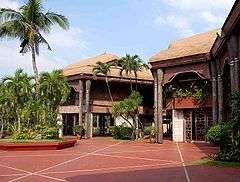 The Coconut Palace was the residence of the Vice President during the term of Jejomar Binay.[11]

Historically, the Vice President was not given an official residence. However, the Vice President also held office along with the President at the Executive Building (now Kalayaan Hall) in the complex of Malacañang Palace from 1935 until 1972, when the position was abolished under martial law and the 1973 Constitution. When the position was reinstated, Vice President Salvador H. Laurel held office at the former Legislative Building at Padre Burgos Avenue, Manila, until the building became the National Museum of the Philippines. The Vice President's office was transferred to the Philippine International Convention Center, and again to the PNB Financial Center, both in Pasay, Metro Manila in 2005.[12] In 2011, the Coconut Palace also in Pasay was designated as the principal workplace of the Vice President of the Philippines. Beginning June 30, 2016, the office was transferred to the Quezon City Reception House in Quezon City.

The Vice President of the Philippines generally rides in a Mercedes Benz W140 S-Class, backed up by personnel from the Presidential Security Group.