This article is about the New Zealand university. For other universities with "Victoria" in their name, see Victoria University (disambiguation).

The university is well known for its programmes in law, the humanities, and some scientific disciplines, and offers a broad range of other courses. Entry to all courses at first year is open, and entry to second year in some programmes (e.g. law, criminology, creative writing, architecture) is restricted.

Victoria had the highest average research grade in the New Zealand Government's Performance-Based Research Fund exercise in 2012, having been ranked 4th in 2006 and 3rd in 2003.[6] Victoria has been ranked 229th in the World's Top 500 universities by the QS World University Rankings (2015), an increase of 46 from the 2014 ranking.[7] 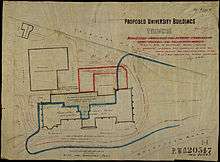 The original 1903 plan for Victoria University

Victoria is named after Queen Victoria, as 1897 was the 60th anniversary of her coronation. There was a dispute initially as to where to site it, and it opened in temporary facilities in Thorndon. It was eventually decided to place it in Kelburn, where it still has its primary campus. This decision was influenced by the Cable Car company's offer of a donation of £1,000 if it were located in Kelburn so that students would patronise the Cable Car from the city.[8] The foundation stone of the historic Hunter Building was laid in 1904. The original name was Victoria University College, but on the dissolution of the University of New Zealand in 1961 Victoria or "Vic" became the Victoria University of Wellington, conferring its own degrees.

An extramural branch was founded at Palmerston North in 1960. It merged with Massey College on 1 January 1963. Having become a branch of Victoria upon the University of New Zealand's 1961 demise, the merged college became Massey University on 1 January 1964.[9]

In 2004, Victoria celebrated the 100th birthday of its first home, the Hunter Building.

In recent years, Victoria has had to expand out of its original campus in Kelburn, and new campuses have been set up in Te Aro (architecture and design), Pipitea (opposite Parliament, housing the law and business schools) and Karori (education) – the Wellington College of Education, established in 1880, merged with the University to become its revived Faculty of Education on 1 January 2005.

In 2015, Victoria opened a new campus in Auckland to service the growing demand for its courses and expertise.[10] 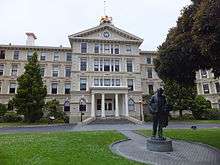 Victoria University of Wellington's Pipitea Campus: the Faculty of Law 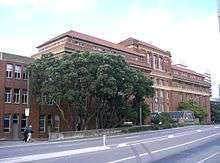 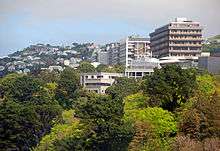 Its main campus is in Kelburn, a suburb on a hill overlooking the Wellington central business district, where its administration and humanities & social science and science faculties are based. The law and commerce and administration faculties are in the Pipitea Campus,[11] near Parliament Buildings, which consists of Rutherford House, the restored Old Government Buildings, and the West Wing of the Wellington Railway Station. A smaller campus in Te Aro[12] is the base for the architecture and design schools. The Faculty of Education is in the Karori campus. The newest facility, the Victoria University Coastal Ecology Laboratory supports research programmes in marine biology and coastal ecology on Wellington's rugged south coast.

For New Zealand residents entry to most courses is open, with a few exceptions. Performance Music requires an audition. There is selection for entry into the second year in degrees such as the LLB, BArch and BDes. BA in criminology and creative writing is also based on selection.

It is one of only three institutions (University of Auckland and Unitec being the others) to offer a degree in architecture in New Zealand.

In conjunction with Massey University it owns the New Zealand School of Music.

The blazon for the arms is: Vert on a fesse engrailed between three Crowns Or, a Canton Azure charged with four Estoilles Argent.

What this means: The colour of the shield is first described. Vert is green so the shield is green. A fess is a horizontal stripe across the shield and engrailed means the edges of the fess are wavy. The fess is between three crowns and or means gold so the crowns are golden. Conventionally with three objects two are placed above and one below, in this case, the fess. A canton is a square and azure is blue so a blue square is placed on the fess. An estoille is a star and argent is silver so there are four silver stars on the canton. These are supposed to represent the Southern Cross.

Crest: The crest sits above the shield and consists of a crown on which sits a lion rampant (facing left) holding a staff from which flies a banner with the cross of Saint George.

Supporters: These are a lion and a Māori figure.

Motto: "Sapientia magis auro desideranda" which may be translated as "Wisdom is more to be desired than gold".

The modern depiction: The Coat of Arms has been redesigned as a corporate logo and is depicted in monotone only and usually in green. The crest and scroll with the motto have disappeared and what was left has been stylised rather than being depicted in the traditional heraldic manner.

The library was established in 1899.[14] The collections are dispersed over five locations: Kelburn Library, Law Library, W. J. Scott Education Library, Architecture and Design Library and Commerce Library. The library is also has a collection of digital resources and acquires full text material online. In addition to electronic resources, printed books and journals, the Library also acquires works in microform, sound recordings, videos and other media consistent with the University's academic programme needs.[15]

The library holds approximately 1.3 million printed volumes. It provides access to 70,000 print and electronic periodical titles and 200,000 e-books. It is an official Depository Library (DL-296) of the United Nations System (DEPOLIB), one of only three in the country. The J. C. Beaglehole Room is the official repository of all archival and manuscript material, and provides a supervised research service for Rare Books, for fine or fragile print items, and for 'last resort' copies of University publications.

The New Zealand Electronic Text Centre (NZETC) is a digital library of significant New Zealand and Pacific Island texts and materials, and is arranged according to the library of Congress classification system. The library has two online repositories: the ResearchArchive is its open research repository, which makes the university's research freely available online and the RestrictedArchive, which is the university's private research repository and is accessible only to Victoria University staff and students.[16]

Between April 2003 and February 2010 the Library was home to two locally famous residents, Tessa Brown and Sandy Rankine, a pair of library cats.[17] 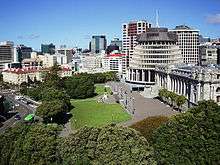 Faculty of Law on the left, Houses of Parliament on the right.

The Faculty of Law is located in the restored Old Government Buildings at the centre of the country's law-making precinct, in close proximity to Parliament, the Supreme Court and the Court of Appeal, and the District and High courts. The Faculty is rated 19th in the world in the 2013 QS World University Rankings[26] and led New Zealand's law faculties for research in the most recent Performance-Based Research Fund Evaluation.[27]

It offers both undergraduate LLB degrees (including Honours) and the postgraduate Certificate in Law (CertLaw), Diploma in Law (DipLaw) and Masters in Law (LLM) as well as the Doctor in Philosophy of Law (PhD). The Law Students' Association organises social events as well as the competitions, an annual Law Revue and public addresses. Many judges, MPs and notable New Zealanders are alumni of the Faculty. In 2013, the Faculty had 1781 law students enrolled. The Dean is Professor Tony Smith, an international expert on the Law of Contempt. Prior to his appointment, he was Professor of Criminal Law and Public Law at the University of Cambridge, and he remains a Fellow of Gonville and Caius College.

Victoria has more than 40 research centres and institutes, including

To see more, browse an A-Z List of Research Centres and Institutes[28]

In July, 2016, a Victoria University of Wellington staff member Rebekah Proctor was jailed for two years and five months for defrauding the university out of $480,000 - as of 27th October Proctor has appealed her sentence.[31] [32] In October of 2016 students protested the cut of several European languages, including the German language department losing 43% of staff.[33] Also in 2016, Victoria University of Wellington was embroiled in a row with the Tertiary Education Union, when it was discovered that union members were being paid less than non-union members.[34] This led the TEU to characterise the Vice-Chancellor Grant Guildford as being anti-union, and resulted in a one day strike.[35] [36] [37]

In late 2015, academics and students at Victoria University of Wellington spoke out at the university hosting Israeli Defence Force troops for a public lecture.[38] [39] The opposition for this public lecture came about because of the soldier's involvement in Operation Protective Edge, which is thought to have killed at least 2000 Palestinians, most of them civilians.[40]

In 2012 a facebook page that is associated with Victoria University of Wellington students, Overheard @ Vic, was in the media for the many rape comments that were made.[41] These included comments like "you've got to rape the paper, man, you can't let the paper rape you" and "at least ugly girls don't get raped".[42] In response to this, a spokesperson for Victoria University of Wellington said that "student safety was a key focus, and the university had partnered with police and Wellington City Council to promote awareness of personal safety." [43]

In 2010 there was widespread condemnation of Victoria University of Wellington removing the Gender Studies department.[44] As of October 2016 this has not been reinstated.

Panorama of the view from the fifth floor stairwell of the Cotton Building, Kelburn Campus.