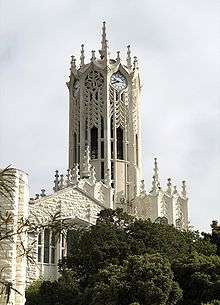 The clock tower building (Old Arts Building) on the City campus. The building is protected as a 'Category I' historic place, and was finished in 1926. It is considered an Auckland landmark and icon of the university.[2] 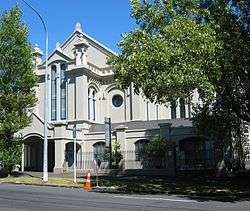 University House, also known as the Old Synagogue, leased by the University

The University conducted little research until the 1930s, when there was a spike in interest in academic research during the Depression. At this point, the college's executive council issued several resolutions in favour of academic freedom after the controversial dismissal of John Beaglehole (allegedly for a letter to a newspaper where he publicly defended the right of communists to distribute their literature), which helped encourage the college's growth.

In 1966, lecturers Keith Sinclair and Bob Chapman established The University of Auckland Art Collection, beginning with the purchase of several paintings and drawings by Colin McCahon. The Collection is now managed by the Centre for Art Research, based at the Gus Fisher Gallery. The Stage A of the Science building is opened by Her Majesty Queen Elizabeth The Queen Mother on 3 May.

Queen Elizabeth II opened the new School of Medicine Building at Grafton on 24 March 1970. The Queen also opened the Liggins Institute in 2002.

The North Shore Campus, established in 2001, was located in the suburb of Takapuna. It offered the Bachelor of Business and Information Management degree. At the end of 2006, the campus was closed and the degree relocated to the City campus.

On 1 September 2004, the Auckland College of Education merged with the University's School of Education (previously part of the Arts Faculty) to form the Faculty of Education. The faculty is based at the Epsom Campus of the former college, with an additional campus in Whangarei.

The University opened a new business school building in 2007, following the completion of the Information Commons. It has recently gained international accreditations for all its programmes and now completes the "Triple Crown" (AMBA, EQUIS and AACSB).

In May 2013 the University purchased a site for new 5 hectare campus adjacent to the major business area in Newmarket. It will provide the University with a site for expansion over the next 50 years, with Engineering occupying the first of the new faculties in 2014.

Director of Administration and Registrar

The Blazon of the Arms of the University of Auckland is: Azure between three mullets argent an open Book proper edged and bound Or with seven Clasps on either side Or, on a chief wavy also argent three Kiwis proper.[10] Translation of the Blazon. The shield is the first part described "Azure" means blue so the shield is blue. A "mullet" is a five pointed star and when there are three of them they are depicted two above and one below. Their colour is silver ("argent".) Between these stars is an open book and "proper" means the book is shown in its natural colours – normally black and white. The edge ("edged") of the book and the binding of the book is in gold ("Or".) and it is bound with seven clasps on either side which would close the book securely when closed. These clasps are also gold. A "chief" is a broad strip at the top of the shield but "wavy" means that the base of the chief is in a wave like line. The colour of the chief is silver ("argent".) On the chief are three kiwis and "proper" means that’s they are shown in their natural colour.

The university's motto is Ingenio et labore which may be translated from Latin as "By natural ability and hard work."[10]

Since eliminating open entry in 2009,[11] all applicants must have a university entrance qualification. Domestic students are required to achieve the NZQA University Entrance Standard,[12] while international students must achieve an equivalent approved qualification in their country.[13] Admission to the University also requires applicants to meet the preset academic and English language entry requirements specific to the degree for which they are applying.[14] Some programmes also have a preset number of places available within the degree. To be guaranteed entry students must achieve a rank score as well as meet any additional requirements.[15]

All students who did not complete their high school education or equivalent in English are also required to provide a valid IELTS score (minimum of 6.0) or equivalent.[16] 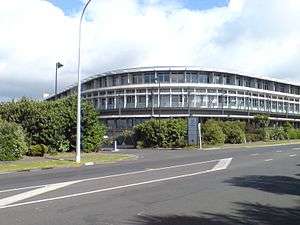 School of Population Health complex, part of the Tāmaki Campus

The University of Auckland is spread across six campuses, all situated in Auckland Region and Northland Region in the upper North Island of New Zealand.

In July 2011 Kim and Jeanette Goldwater gifted a 14-hectare winery in Waiheke Island to the University. This is set to host the University's Wine Science courses.[18]

In 2010 Lion ceased operations at its Newmarket brewery and moved to East Tamaki, selling the site to the University of Auckland in May 2013.[19] The university plans to build an engineering research space and a new civil structures hall.

From the start of the first semester of 2010, the University banned smoking on any of its property, including inside and outside buildings in areas that were once designated as smoking areas.[20] 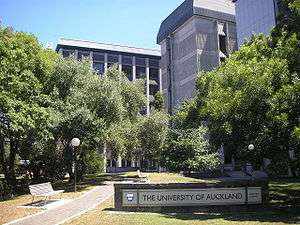 Part of the Medical School buildings at Grafton

Until his death in 2009, the longest serving staff member was Emeritus Professor of Prehistory, Roger Curtis Green, BA BSc (New Mexico), PhD (Harv.), FRSNZ, MANAS. He had been on the staff 1961–66 and from 1973 onwards. The longest serving, non-'retired' staff member is Bernard Brown, ONZM, LLB (Hons) (Leeds), LLM (Sing.). He has been a full-time senior lecturer in the faculty of law 1962-65 and 1969 onwards. William Phillips, the influential economist largely famed for his Phillips curve, taught at the university from 1969 until his death in 1975.

According to the Association of University Staff of New Zealand (AUS) in 2007, New Zealand universities, including the University of Auckland, had been taking a more litigious approach to managing their staff in recent years and engaged lawyers and employment advocates to handle even minor matters. The University of Auckland "paid out more than $780,000 in 2006 to settle problems it listed as including personal grievances and disputes".[29] For example, Paul Buchanan, a popular, world-renowned lecturer on international relations and security, was summarily dismissed in 2007 because a student to whom he sent an email complained that she found his comments about her performance in his class to be offensive.[30] He was later reinstated,[31] but this was just a formality[30] and he never returned to lecturing. As the AUS would not financially support a case for full reinstatement, Buchanan accepted the formal reinstatement and a nominal monetary payout as a settlement of his appeal to the Employment Court.[30]

Auckland UniServices Limited is the commercial research and knowledge transfer company for the university.[32] 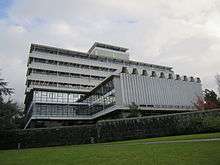 The university's General Library in June 2012

2011 QS World University Rankings[39] ranked University of Auckland 82nd overall in the world. In the subject rankings it ranked less than the previous year: 55th in Arts & Humanities, 62nd in Engineering & IT, 50th in Life Sciences & Biomedicine, 73rd in Natural Sciences, 41st in Social Sciences and 33rd in Accounting & Finance.

2014 QS World University Rankings[40] ranked University of Auckland 92nd overall in the world. In the subject rankings it continues getting less than previous years for most areas: 91st in Natural Sciences, 66th in Engineering & IT, 74th in Life Sciences & Biomedicine, 30th in Social Sciences and 35th in Arts & Humanities.

2015 QS World University Rankings[41] ranked University of Auckland 82nd overall in the world. In Faculty rankings, the University was placed 28th in Arts and Humanities, 34th in Social Sciences and Management, 59th in Engineering and Technology, 70th in Life Sciences and Medicine, and 134th in Natural Sciences.

The University of Auckland is a research-led university, and had the second highest ranking in the 2006 and 2012 Performance Based Research Fund (PBRF) exercises conducted by the government that evaluated the quality of researchers and research output of all tertiary institutions in New Zealand.

In the previous PBRF evaluation in 2003, when the University was ranked the top research university in New Zealand, the Commission commented: "On virtually any measure, the University of Auckland is the country’s leading research university. Not only did it achieve the highest quality score of any TEO [tertiary education organisation], but it also has by far the largest share of A-rated researchers in the country."[42]

The University provides a range of accommodation options for students. Several hundred live in Residential Halls and Apartments, which provide, respectively, food, accommodation, social and welfare services, alongside self-catered, private residences. Ongoing expansion of accommodation facilities will see 2780 students housed in University residences from Semester One 2016.[43]

Construction work started in 2015 on a 343-bed studio apartment complex on the corner of Symonds and Airdale Streets, set for completion on 2017. A further 800 catered beds are currently being planned and are expected to be completed by 2019.[43]

CECIL (CSL, short for Computer Supported Learning) was the university's learning management and course management system before Canvas and was developed in house. It had more than 44,000 logins per day (2008 April). Cecil support staff worked with academics on research into cheating detections during online assessment,[45] productivity improvement using a learning management system (LMS),[46] and effectiveness of tools in LMS.[47] Cecil contains many of the features of similar systems such as Sakai Project and WebCT. Cecil also provides interactive tools for collaboration and other tools specific to the University.[48] In 2014, a review of learning and teaching technology was initiated, seeking to replace Cecil. The review determined that Canvas (a learning management system developed by Instructure) would be implemented prior to the commencement of the 2016 academic year, and CECIL now acts as an archive for old courses.[49]