Vimaladharmasuriya I of Kandy

Vimaladharmasuriya I was a king of Sri Lanka who ruled the country from 1590 to 1604. He was a late 16th-century to early 17th-century king of the Kingdom of Kandy, located in the central hills of the present-day island nation of Sri Lanka. His reputation was built when he successfully repulsed two major Portuguese offensives in to Kandy, the Campaign of Danture in 1594 and the Battle of Balana in 1602, in both of which the Portuguese were humiliatingly defeated.

Vimaladharmasuriya I is referred to in four names as per different sources. Rajavaliya[1] mentions his early name as Konappu Bandara and says he is the son of Virasundara bandara from Peradeniya royal family. Reports of early dutch visitors (sebald de veert and joris van spilbergen) mention him as Don João da Austria.[2] Joao Rebeiro mentions one Don Jhon Appuhamy a commoner who was sent to conquer the kingdom of Kandy and of a Konnapu Bandara. Historians has also noted that from 1604 to 1617 there is little information available what has happened in the Kandyan Kingdom.[3] Therefore, there is a possibility of mixing up of several personalities by the later historians in reconstructing the history of that period. As per deed given by this king to the chief commander of Campaign of Danture, his mothers name is Kosbokke Gedara Vimalu, after whom he has taken up his name Vimaladharmasuriya [4][5] 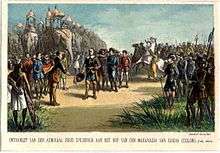 Vimaladharmasuriya meeting with the Dutch explorer Joris van Spilbergen in 1602.

King Vimaladharmasuriya is regarded by some historians as the Kandyan Kingdom's second founder, responsible for its revival. He was baptized under the Portuguese name of Don João da Austria. In 1594 he married Princess Kusmasana Devi who, as Dona Catherina, was put forward by the Portuguese as the rightful claimant to the throne and became king. After renouncing Christianity and embracing Buddhism, Vimaladharmasuriya constructed a two-tiered shrine close to his palace in order to sanctify his capital, Kandy, and accommodate the politically-important relic of the tooth of the Buddha.[6][7]

The Dutch explorer Joris van Spilbergen offered an alliance to fight off the Portuguese. Following these negotiations, Sebald de Weert was sent officially by Admiral Wybrand van Warwijck to mount a joint counter-attack against the Portuguese. The alliance ended in disaster however during a drinking party, where the Dutch became rowdy, De Weert according to François Valentijn insulted the queen, and De Weert and all 47 Dutchmen accompanying him consequently were killed. An alliance would not be possible again until 1612, when a new envoy, Marcellus de Boschouwer, established a treaty with Senarat of Kandy, ultimately leading to the eviction of the Portuguese from the island, and about one century of Dutch rule, until the British in turn took the island.

At the time of Vimaladharmasuriya's coronation Buddhism was on the verge of disappearing from the island. The king learned that ordained Buddhist monks no longer existed on the island so he sent one of his ministers to Lower Burma and reestablished Buddhism in Kandy. By this time, the relic of the tooth of the Buddha was hidden in Delgamuwa Raja Maha Vihara in Sabaragamuwa Province. The king brought the tooth relic to Kandy and built a two-storied Temple of the Tooth near the Royal Palace of Kandy to house the relic. He also repaired many ruined Buddhist temples throughout his kingdom.[8]