House of Siri Sanga Bo was a powerful dynasty which ruled parts of Sri Lanka from Vijayabahu III of Dambadeniya (1220–1224) until Rajasinha I of Sitawaka (1581–1591). Vijayabahu III of Dambadeniya routed Kalinga Magha's armies from Maya Rata and established his fortress at Dambadeniya. This dynasty was able to protect their independence by facing so many foreign invasions thereafter. They had to change their capital city to Dambadeniya, Yapahuwa and Kurunagala because of continuous invasions from southern India.[2]

In the reign of Kalinga Magha, native sinhalese people moved to south and Maya Rata because of his remorseless governance in Kingdom of Polonnaruwa. Meanwhile, this reign, a descendant of King Sirisangabo called "Vijayabahu III", fought against Kalinga Magha's armies and became the king of Dambadeniya. He obtained Lord Buddha's tooth relic and alms chalice to Dambadeniya from the place which Magha's people had buried them in Kotmale. Every time, He helped to reconstruct the destroyed Buddhist dispensation. He was the founder of the House of Siri Sanga Bo.[3] 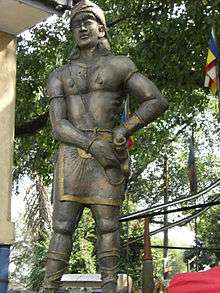 The decline of the Kingdom of Sitawaka

The Last King of this dynasty was Rajasinha I of Sitawaka. He was a Great Warrior King of Sitawaka and the son of Mayadunne. Later, He designated a South Indian, called "Aritta Kivendu" (Mannamperuma Mohottala) as his chief advisor. He influenced the King to be converted to Hinduism. Rajasinha was advised by Mannamperuma to destroy significant Buddhist sites such as Sigiriya and Sri pada. These attacks caused to a discontent among Buddhist people and prelates about the King. It was one of the main reasons for the decline of the Kingdom of Sitawaka and the House of Siri Sanga Bo. Because of his actions Buddhists led a rebellion against him. He suppressed the rebellion and the leaders who supported the rebellion were caught. Most of them were Buddhist prelates. Over hundreds of Buddhist monks (with the chief prelate of Sitawaka) were killed by Rajasinha. These acts created a huge resentment among the Buddhists and the King.

Before a long time, Rajasinha had killed his agent (Samantha) of Kandy called "Weerasundara Bandara". Weerasundara Bandara's son escaped to Portuguese army in Mannar from Sitawaka. His name was Konappu Bandara. Later, He returned to Kandy and rebelled against Rajasinha with the help of Portuguese army. He captured Kandy from Rajasinha and became the King of Kandy, but Rajasinha didn't stop his attempts to recapture Kandy. The last attempt of Rajasinha (Battle of Balana) was defeated by Konappu Bandara. While he was returning from Balana, he was wounded by a pointed bamboo segment and died at the garden of Pethangoda in March 1592. Rajasinha haven't any heir to his throne, so his kingdom was belonged to Konappu Bandara (Vimaladharmasuriya I of Kandy).