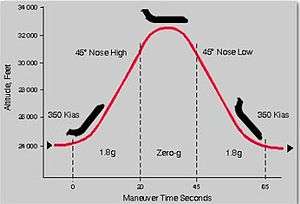 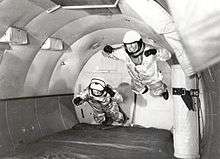 Project Mercury astronauts on board a C-131 Samaritan flying as the "vomit comet", 1959

Physicist Stephen Hawking on board a reduced-gravity aircraft in 2007

Versions of such airplanes, officially nicknamed Weightless Wonders,[1] were operated by the NASA Reduced Gravity Research Program.[2] The unofficial nickname "vomit comet" became popular among those who experienced their operation.[3]

The aircraft gives its occupants the sensation of weightlessness by following a parabolic flight path relative to the center of the Earth.[4] While following this path, the aircraft and its payload are in free fall at certain points of its flight path. The aircraft is used in this way to demonstrate to astronauts what it is like to orbit the Earth. During this time the aircraft does not exert any ground reaction force on its contents, causing the sensation of weightlessness.

Initially, the aircraft climbs with a pitch angle of 45 degrees using engine thrust and elevator controls. The sensation of weightlessness is achieved by reducing thrust and lowering the nose to maintain a neutral, or "zero lift", configuration such that the aircraft follows a ballistic trajectory, with engine thrust exactly compensating for drag. Weightlessness begins while ascending and lasts all the way "up-and-over the hump", until the craft reaches a downward pitch angle of around 30 degrees. At this point, the craft is pointing downward at high speed and must begin to pull back into the nose-up attitude to repeat the maneuver. The forces are then roughly twice that of gravity on the way down, at the bottom, and up again. This lasts all the way until the aircraft is again halfway up its upward trajectory, and the pilot again reduces the thrust and lowers the nose.[5]

This aircraft is used to train astronauts in zero-g maneuvers, giving them about 25 seconds of weightlessness out of 65 seconds of flight in each parabola. During such training, the airplane typically flies about 40–60 parabolic maneuvers. In about two thirds of the passengers, these flights produce nausea due to airsickness,[6][7] giving the plane its nickname "vomit comet".

The Canadian Space Agency and the National Research Council have a Falcon 20 used for microgravity research.[8] The small plane is normally not used for people to float freely and experience weightlessness, however comedian Rick Mercer did so for a segment on his show.[9]

The first zero G plane to enter service in Latin America is a T-39 Sabreliner nicknamed CONDOR, operated for the Ecuadorian Civilian Space Agency and the Ecuadorian Air Force since May, 2008.[10] On June 19, 2008, this plane carried a 7-year-old boy as he set the Guinness world record for the youngest human being to fly in microgravity.[11]

Since 1984 the ESA and the CNES have flown reduced-gravity missions in a variety of aircraft, including NASA's KC-135, a Caravelle, an Ilyushin IL-76 MDK and an Airbus A300 known as the Zero-G. In 2014 the A300 was phased out in favor of a more modern Airbus A310, also named Zero-G.[12] It is based at Bordeaux-Mérignac airport in France and has also been flown from Dübendorf Air Base in Switzerland.[13][14] Since 1997 CNES subsidiary Novespace has handled the management of these flights.[15]

In Russia, commercial flights are offered on the Ilyushin Il-76 jet; several U.S. companies book flights on these jets.[16]

OK Go, an American alternative rock band, made a music video for their song "Upside Down & Inside Out" while moving about in microgravity. The music video was shot on an Il-76 MDK jet as part of an advertising campaign for Russian S7 Airlines.[17][18][19] 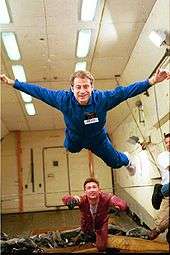 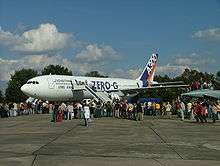 NASA flew zero gravity flights on various aircraft for many years. In 1959 Project Mercury astronauts trained in a C-131 Samaritan aircraft, which was dubbed the "vomit comet".[20]

Twin KC-135 Stratotankers were used until December 2004 but later retired. One, a KC-135A registered N930NA (also known as NASA 930, formerly USAF serial no. 59-1481), was also used by Universal Pictures and Imagine Entertainment for filming scenes involving weightlessness in the movie Apollo 13; that aircraft was retired in 2000 and is now on display at Ellington Field, near the Johnson Space Center. The KC-135A is estimated to have flown over 58,000 parabolas. The other (N931NA or NASA 931, formerly AF serial no. 63-7998) made its final flight on October 29, 2004, and is permanently stored in the Pima Air & Space Museum in Tucson, Arizona.

As of 2015 NASA had a microgravity services contract with Zero Gravity Corporation (ZERO-G) and used its aircraft, G-FORCE ONE, a modified Boeing 727-200.[22]

In late 2004, the Zero Gravity Corporation became the first company in the United States to offer zero-g flights to the general public, using Boeing 727 jets. Each flight consists of around 15 parabolas, including simulations of the gravity levels of the Moon and Mars, as well as complete weightlessness.[23] This profile allows ZERO-G's clients to enjoy weightlessness with minimal motion discomfort.

In 2014, Integrated Spaceflight Services, the Research and Education partner of Swiss Space Systems (S3) in America, began its offering of comprehensive reduced-gravity services on S3's Airbus A340 aircraft, as well as FAA certification of science and engineering payloads.[24] At the end of 2016, the company Swiss Space Systems was announcing its first ever parabolic flights in January 2017, however, according to astronaut Claude Nicollier, who is President of the Committee of Experts of Swiss Space Systems, "it is absolutely impossible, it needs an official authorization and it will take months, if not years".[25]

Aurora Aerospace in Oldsmar, Florida offers zero-g flights using a Fuji/Rockwell Commander 700. It is also used to simulate the gravity of the Moon and Mars.[26]

According to former Reduced Gravity Research Program director John Yaniec, anxiety contributes most to passengers' airsickness. The stress on their bodies creates a sense of panic and therefore causes the passenger to vomit. Yaniec gives a rough estimate of passengers, that "one third [become] violently ill, the next third moderately ill, and the final third not at all." Vomiting is referred to as "ill".[6]

Scopolamine is often used as an antiemetic during reduced-gravity-aircraft training.