Wainuiomata (/ˌwaɪnjuːiˈoʊmɑːtə/) is a large suburb of Lower Hutt, in the Wellington Region of New Zealand's North Island. At the 2013 census, Wainuiomata had a population of 16,786.[2]

The word 'Wainui-o-mata' is a Māori name made up of the words Wai = water, Nui = big, O = of, and Mata – which could refer to a woman's name. The origins of the word are disputed, but one commonly accepted translation refers to the women who came over the Wainuiomata Hill to evade marauding tribes from the north, and who sat wailing by the stream after the slaughter of their menfolk. From this we have 'faces streaming with water' or 'tears' although it could equally refer to the large pools of water which lay over the swampy surface (face) of the northern end of the Valley, or the river itself which is known to flood the Wainui (Coast Road) valley.

Wainuiomata occupies a basin at the headwaters of the Wainuiomata River, between the eastern Hutt hills and the Orongorongos. There is little evidence of Māori occupation of the area before 1840, probably because it was covered in dense forest and large swamps. The 1855 earthquake raised these swamps and encouraged European settlement. The earliest settlements were based around the river where the timber mills supplied the Wellington region where the demand was great in the 1850s and '60s. Today this area is known as "The Village" though it is also known as "Homedale". The isolated nature of Wainuiomata was a problem for early settlers. Narrow hill routes into the settlement were the only access during the 1850s and 1860s. By the end of the 19th century there were two roads in the valley, Main Road and Fitzherbert Road (known locally as "Swamp Road").[3]

The town's economy in these early days was largely based around timber milling from the forests around the Wainuiomata River. In the 1850s Sir William Fitzherbert started a flax-milling business in the north of the valley,[4] but this proved to be economically unviable.

In 1866 the Methodist Wainuiomata Coast Road Church was built on land donated by settler Richard Prouse. The oldest Methodist Church and the third oldest church in the Wellington Region it was used for regular services until the congregation outgrew it and moved to the new St Stephens Church in 1957.

Once the forests started to be cleared, sheep and dairy farming became an important part of the local economy. The settlement started to grow in the 1920s.

In 1928 the Wainui-o-Mata Development Limited was formed for the purpose of developing the Wainuiomata Valley through the acquisition of 1,600 hectares (4,000 acres) land, subdividing it and its sale as residential lots.[3] An important part of the project was the construction of the Wainuiomata Tunnel linking the Hutt Valley and Wainuiomata Valley for improving access to the new settlement.[5] Construction of the tunnel commenced in 1932, but the Depression bought a halt to construction, with many investors in the company losing money. After World War II, major growth occurred due to affordable housing developments attracted many young couples moved which transformed Wainuiomata into a working-class community. This influx of young families earned the community the nickname of ‘Nappy Valley’ in the 1950s.[1] 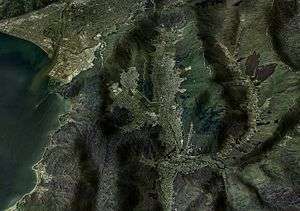 An aerial view of the Wainuiomata Valley. The Hutt Valley and Wellington Harbour appear on the left, with Moores Valley to the right.

The town is often abbreviated to Wainui by locals.[6]

Wainuiomata has a reputation for its enthusiasm for sports, particularly rugby league. The Australian NRL Grand Final in 2005 saw each team containing a former member of the Wainuiomata Rugby League Club.

The town's sports enthusiasts related to an incident that attracted national media attention in April 2009 when a Palmerston North motelier banned all Wainuiomata residents. This came after a series of misdemeanours by visitors from there.[7]

The many sports-stars originating from Wainuiomata include rugby union All Blacks Piri Weepu, Neemia Tialata and Tana Umaga,[8] as well as Leinster Rugby player Leo Auva'a.

Wainuiomata also achieved prominence with the first series of the television production Seven Periods with Mr Gormsby, shot in the old Wainuiomata College with many local residents as cast members.[9]

The documentary series Heartland made Wainuiomata a focus in a film by Gary McCormick during its 1994 series.[10] The show made a household name of Chloe Reeves, an aspiring jazz singer, who voiced her romantic dreams while wearing trademark tiger slippers. Reeves, or Chloe of Wainuiomata, became a byword in New Zealand for the lower socio-economic demographic of Wainuiomata.[11]

Since 1989, Wainuiomata has been part of Lower Hutt City. The Wainuiomata ward covers the suburb and the surrounding rural area, electing two councillors to the Hutt City Council. Following the 2013 local elections, the ward is represented by Campbell Barry and Margaret Willard.[12]

The Wainuiomata Hill Road is the only major road into and out of Wainuiomata, connecting the suburb with Gracefield and Waiwhetu. Four lanes wide (two in each direction), it is one of the steepest roads in the Wellington region; on the Lower Hutt side, the road climbs 195 metres in 1.9 km, resulting in an average grade of 10.3%.[13]

Two regular bus routes serve Wainuiomata: 160 Wainuiomata North and 170 Wainuiomata South. Both bus routes travel to Lower Hutt Queensgate via Waterloo Interchange, where they with Hutt Valley Line train services to Wellington. Route 160 serves the northern neighbourhoods of Parkway, Arakura and Glendale, while route 170 serves the southern neighbourhoods of Fernlea and Homedale; both routes serve the shopping centre. Two peak-hour services, 80N and 80S, follow routes 160 and 170 within Wainuiomata respectively, but travel via Gracefield and Petone express to central Wellington.

A branch commuter railway line (see Wainuiomata railway proposals) was proposed at times in the 20th century, but never proceeded.

Wainuiomata has a volunteer fire brigade, established in 1944 following a major house-fire in 1943. The first superintendent was Mr J.S. Dunn. The first station was built in 1945 on land opposite Wainuiomata Primary School. The Wainuiomata Development Company donated land and timber to the brigade, with other brigades and companies donating hose, standpipes and ladders. The Stokes Valley brigade supplied a Gwynne Trailer pump.

In the early days any available vehicle would tow the pump and trailer to calls. Often this was a 30-seater bus, as one of the foundation members, Mr Artie Kilmister, was the local bus driver. In 1946 the brigade took delivery of its first "real" fire engine, a Ford V8 Marmon-Herrington 4-wheel-drive.[16] This truck, an ex Air Force tender, remained in service until 1965. It had no flashing lights, only a siren and on occasions this failed: it was not unusual for members to yell from the truck "get out of the way", or words to that effect.