This article is about the river in west-central China. For other smaller Chinese rivers, see Wei River (disambiguation). 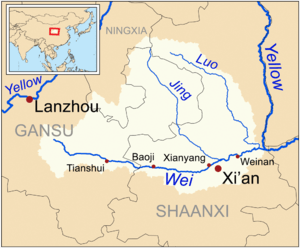 The drainage basin of the modern Wei.

The Wei River (Chinese: 渭河; pinyin: Wèi Hé; Wade–Giles: Wei Ho) is a major river in west-central China's Gansu and Shaanxi provinces. It is the largest tributary of the Yellow River and very important in the early development of Chinese civilization.

The Wei River's tributaries include the Luo River, Jing River, and the Chishui River. 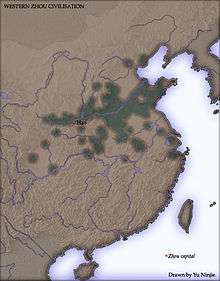 Population concentration during the Western Zhou Dynasty (1050–771 BC). Note the extension up the Wei valley.

The valley of the Wei was one of the early cradles of Chinese civilization, along which the capitals of the Zhou, Qin, Han, and Tang Dynasties were situated. The area of Dingxi around its headwaters in Gansu has numerous stone age sites from various early cultures. The Wei Valley is likely the earliest center of Chinese civilization, and also the location of China's first major irrigation works.[1] Some Chinese historians now believe the Wei is the ancient Jiang River that gave its name to the families of Shennong and the Yan emperor, two Chinese legendary heroes credited with the early development of agriculture there.[2]

The headwaters of the Wei River are also notable in the development of the Northern Silk Road. The Chinese segment of the Northern Silk Road connected Xi'an (then the capital of China) to the west via Baoji, Tianshui at the Wei's headwaters, Lanzhou, Dunhuang, and the Wushao Ling Mountain, before looping north of the Takla Makan on its way to Kashgar and the routes into Parthia.[3]

In September 2003 extensive rainfall led to flooding that caused over 30 fatalities, and temporarily displaced over 300,000 persons.[4] Ecological aspects of the Wei River have been examined with respect to flow rates in the Wei River.[5]