For other uses, see Chinese destroyer Lanzhou (170) and Lanzhou (in modern Shanxi).

Lanzhou is the capital and largest city of Gansu Province in Northwest China.[3] The prefecture-level city, located on the banks of the Yellow River, is a key regional transportation hub, connecting areas further west by rail to the eastern half of the country. Historically, it has been a major link on the Northern Silk Road. The city is also a center for heavy industry and petrochemical industry. Lanzhou ranks as one of the cities with the worst air quality in the world, due to industrial pollution and its situation in a narrow river valley.

In 81 BC, under the Han dynasty (206 BC–220 AD), it was taken from the Huns' Huandi Chanyu and made the seat of Jincheng commandery (jùn), and later of the Jincheng county (xiàn), later renamed Yunwu. The city used to be called the Golden City, and since at least the first millennium BC it was a major link on the ancient Northern Silk Road,[5][6] and also an important historic Yellow River crossing site. To protect the city, the Great Wall of China was extended as far as Yumen.

After the fall of the Han dynasty, Lanzhou became the capital of a succession of tribal states. In the 4th century it was briefly the capital of the independent state of Liang. The Northern Wei dynasty (386–534) reestablished Jincheng commandery, renaming the county Zicheng. Mixed with different cultural heritages, the area at present-day Gansu province, from the 5th to the 11th century, became a center for Buddhist study. Under the Sui Dynasty (581–618) the city became the seat of Lanzhou prefecture for the first time, retaining this name under the Tang dynasty (618–907). In 763 the area was overrun by the Tibetan Empire and in 843 was conquered by the Tang. Later it fell into the hands of the Western Xia dynasty (which flourished in Qinghai from the 11th to 13th century) and was subsequently absorbed by the Song dynasty (960–1126) in 1041. The name Lanzhou was reestablished, and the county renamed Lanzhuan.

After 1127 it fell into the hands of the Jin dynasty, and after 1235 it came into the possession of the Mongol Empire. 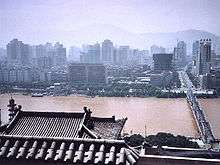 Downtown Lanzhou seen from across the Yellow River

Under the Ming dynasty (1368–1644) the prefecture was demoted to a county and placed under the administration of Lintao superior prefecture, but in 1477 Lanzhou was reestablished as a political unit.

The city acquired its current name in 1656, during the Qing dynasty. When Gansu was made a separate province in 1666, Lanzhou became its capital.

In 1739 the seat of Lintao was transferred to Lanzhou, which was later made a superior prefecture called Lanzhou.

Lanzhou was badly damaged during the Dungan revolt in 1864–1875. In the 1920s and 1930s it became a center of Soviet influence in northwestern China. During the Second Sino-Japanese War (1937–1945) Lanzhou, linked with Xi'an by highway in 1935, became the terminus of the 3,200 km (2,000 mi) Chinese–Soviet highway, used as a route for Soviet supplies destined for the Xi'an area. This highway remained the primary traffic route of northwestern China until the completion of the railway from Lanzhou to Ürümqi, Xinjiang. During the war Lanzhou was heavily bombed by the Japanese.

During the 1937 Japanese invasion of China, the Guominjun Muslim Generals Ma Hongkui and Ma Bufang protected Lanzhou with their cavalry troops, putting up such resistance that the Japanese never captured Lanzhou.[7][8][9]

The city is the seat of a currently vacant Roman Catholic diocese[10] and was previously the center of a vicariate apostolic (Vicariate Apostolic of Northern Kan-Su).[11]

Lanzhou is situated on the upper reaches of the Yellow River where it emerges from the mountains and has been a center since early times, being at the southern end of the route leading via the Hexi Corridor across Central Asia. It commands the approaches to the ancient capital area of Chang'an (modern Xi'an) in Shaanxi province from both the west and the northwest, as well as the area of Qinghai Lake via the upper waters of the Yellow River and its tributaries.

Lanzhou is situated in the temperate zone and enjoys a semi-arid climate (Köppen BSk) with hot summers and cold and very dry winters. The monthly 24-hour average temperature ranges from −5.3 °C (22.5 °F) in January to 22.4 °C (72.3 °F) in July. The mean annual temperature is 9.75 °C (49.5 °F), while annual rainfall is 315 millimetres (12.4 in), almost all of which falls from May to October. The winters are so dry that snow is extremely rare. With monthly percent possible sunshine ranging from 50 percent in December to 59 percent in February, sunshine is generous but not abundant, as the city receives 2,424 hours of bright sunshine annually.

The city is located in a narrow and curved river valley with surrounding mountains causing it to be hemmed in blocking a free flow of air. Lanzhou repeatedly has had the worst air quality of any of 84 Chinese cities surveyed.[14] According to the Blacksmith Institute, Lanzhou is one of the 30 most polluted cities in the world, with its TSP (total suspended particle) rating 247 percent above that of the Gansu State recommendation. Air quality is so poor that at times one cannot see Lanshan, the mountain rising up along the south side of the city. At one point, a controversial suggestion was put forward to bulldoze a mountain adjacent to the city, in order to let fresh air into the bowl where Lanzhou is situated. Lanzhou is also the home of many factories, including some involved in petroleum processing, and suffers from large dust storms kicked up from the Gobi Desert, especially in the winter and spring. In 2011, using Chinese statistics, the World Health Organization reported that Lanzhou has the worst air quality (annual mean PM10 ug/m3 of 150) among eleven western Chinese cities, and is even worse than Beijing with its reading of 121.[15]

According to the National Environmental Analysis released by Tsinghua University and The Asian Development Bank in January 2013, Lanzhou is among one of ten most air polluted cities in the world. Also according to this report, 7 of 10 most air polluted cities are in China, including Taiyuan, Beijing, Urumqi, Lanzhou, Chongqing, Jinan and Shijiazhuang.[16] Since then, the air quality has improved significantly however.[17]

The reach of the Yellow River at Lanzhou carries a high load of silt, giving the river its characteristic muddy appearance; however water quality in this reach is better than the "fetid outflow that barely passes for water two hours downstream".[18]

On April 11, 2014 Lanzhou officials advised residents not to drink tap water, because benzene levels were 20 times the national limit of 10 micrograms per liter.[19] The city water supply suspected industrial chemical production to be the culprit, similar to what happened in 2005 Jilin chemical plant explosions.[20]

Lanzhou experiences earthquakes regularly, although usually at low intensities. In 1920 a large earthquake was experienced killing more than 100,000 people in Eastern Gansu province, although only 42 were killed in Lanzhou itself, the low number being attributed to the strong yet flexible nature of the wooden buildings in the city.[21]

The 14,000-capacity Northwest University for Nationalities Stadium[22] is one of the main sports venues in the city. It is mostly used for football games. A new sports center complex, including a stadium with a capacity of 60,000 spectators and a swimming hall, is under development.[23]

Lanzhou previously had a professional soccer team named Gansu Tianma F.C. from 1999 to 2003.[24] The team played in Chinese Football Association Yi League from 1999 to 2001 and bought a position in the Jia League from Tianjin Lifei. The team relocated to Ningbo, Zhejiang and changed their name to Ningbo Yaoma (Simplified Chinese: 宁波耀马) in 2003.[25] The team later relegated to the Yi League in 2004 and sold to Dongguan Dongcheng, who moved the club to the Hong Kong First Division League.

Former England international Paul Gascoigne played four games in both a playing and coaching role for Gansu in 2003,[26][27] scoring two goals,[28][29] before returning to England after falling out with the club,[30][31] as his mental state meant that he had to return to America for treatment against drink and depression.[32]

On 20 August 2012, Lanzhou New Area was approved by the State Council of China's Central Government as the fifth state-level new special economic development zone (followed by Pudong of Shanghai, Binhai of Tianjin, Liangjiang of Chongqing, Zhoushan of Zhejiang), which is also the first state-level new area in the northwest of China.[33]

Xiguan Mosque after a Friday Prayer 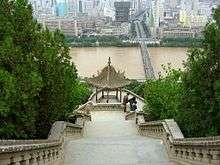 Since 1949 Lanzhou has been transformed from the capital of a poverty-stricken province into the center of a major industrial area.

There is a thermal generating plant supplied with coal from fields in Qinghai. In addition, there is a hydroelectric station at Zhulama Gorge in Gansu, and a large multipurpose dam has been built in the Liujia Gorge on the Yellow River above Lanzhou.[38]

Gansu has one of the largest oil refineries in the country and Lanzhou itself is the center of the province's petrochemical industry. Lanzhou has a large refinery linked to the fields at Yumen by pipeline. It also manufactures equipment for the oil industry.

Lanzhou has a large textile industry, particularly noted for the production of woolen and leather goods. In addition, Lanzhou produces locomotives and rolling stock for the northwestern railways, as well as machine tools and mining equipment. aluminum products, industrial chemicals, and fertilizers are produced on a large scale, and there is a large rubber industry. Copper is mined in nearby Gaolan.

Lanzhou has been one of the centers of China's national nuclear power industry since the 1960s.

Lanzhou is the collecting center and market for agricultural produce and livestock from a wide area.

Further information: Transport in the People's Republic of China 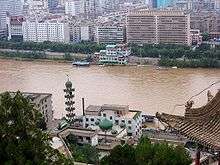 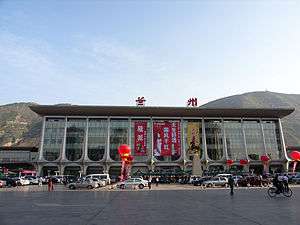 Lanzhou was the second city in northwest China to announce the construction of a subway line, in August 2012.[43] The urban railway network, Lanzhou Metro, is planned to consist of six subway lines running 207 km (129 mi). The first line will be completely underground with a completion deadline of 2016.[44]

Construction of new high-speed passenger-only railway lines is carried out both toward the east (the Xulan Passenger Dedicated Line) and the west (the Lanxin High-Speed Railway). These services will only stop at Lanzhou West Railway Station.

In 2016, Lanzhou was ranked 4th of Chinese cities with the worst rush hour traffic jams.[47]

Lanzhou has a noted bus rapid transit system which opened in 2013 and won the city an honorable mention at the 2014 Sustainable Transport Awards.[48][49]

Other services connect to local and provincial areas.

An in 2014 inaugurated bike sharing system covers mostly the Chengguan District with 377 stations. The system had a successful start and the number of stations is being expanded.[50][51] However, vandalism proved to be an issue, with 600 (out of a total of 6,500) bikes a year not being returned to the stations.[52] As bikes are not rented out anymore late at night, people reportedly outed their frustration on the bikes in the case they were too late to rent one.[53]

The city is the cultural centre of Gansu. It is home to many different ethnic groups and their respective cultures, but the most prominent three groups are the Han, Hui, and Zang.

The city is the seat of Lanzhou University, founded in 1909. The National Minorities Institute at Lanzhou and a number of scientific institutes are also located there. In particular, Northwest Normal University has been the key university at the provincial level, which has prepared over 100,000 teachers in schools across the province Gansu.

Note: Institutions without full-time bachelor's degree programs are not listed.

According to the provincial health bureau, about 42,000 people die of cancer every year in Gansu, accounting for 25 percent of the province's overall deaths. More than 1 billion yuan (146 million U.S. dollars) is spent annually on treating cancer in the province.