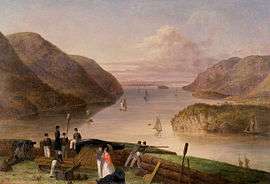 Looking north on the Hudson River from West Point

West Point is the oldest continuously occupied military post in the United States of America. West Point was established in 1775 by George Washington who considered it the most important strategic position in America. Until January 1778, West Point was not occupied by the military. On January 27, 1778, Brigadier General Samuel Holden Parsons and his brigade crossed the ice on the Hudson River and climbed to the plain on West Point and from that day to the present, West Point has been occupied by the United States Army. It comprises approximately 16,000 acres (6,500 ha) including the campus of the United States Military Academy at West Point, which is also frequently called "West Point". It is a Census Designated Place (CDP) located in the Town of Highlands in Orange County, New York,[2][3] located on the western bank of the Hudson River. The population was 6,763 at the 2010 census. It is part of the New York-Newark-Jersey City, NY-NJ-PA Metropolitan Statistical Area as well as the larger New York-Newark, NY-NJ-CT-PA Combined Statistical Area.

West Point had many advantages for being selected as a site to build fortifications on the Hudson River. Vessels passing by West Point had to make a sharp, ninety-degree turn to the west, sail a quarter of a mile, then make another right-angle turn to the north as they continued upriver. These bends were sharper than any point along the Hudson, creating hazards for ships passing through. In addition to the turns in the river, the river was also very narrow, the tidal effects were the greatest, and the current was the swiftest at this location. The treacherous winds also created difficulties for ships trying to navigate through this section of the Hudson.

Construction of forts and batteries in the area of West Point began in the summer of 1775. However, the original location was not the site of the future military academy, but across the Hudson River on Constitution Island (then called Martelaer’s Rock). Problems immediately became apparent in the use of Constitution Island by the Continental Army. The area was vulnerable to attack by land and was dominated by higher ground on all sides, especially from West Point across the river. Other fortifications were built along the Hudson River including twin forts to the south of West Point at the confluence of Popolopen Creek and the Hudson River. Fort Montgomery was constructed on the north shore of Popolopen Creek, and Fort Clinton was located on the south shore. Many of these fortifications were destroyed by the British in October 1777.

Until January 1778, West Point was not occupied by the military. On January 27, 1778, Brigadier General Samuel Holden Parsons and his brigade crossed the ice on the Hudson River and climbed to the plain on West Point and from that day to the present, West Point has been occupied by the United States Army. To reinforce the defenses at West Point, Washington personally selected Thaddeus Kosciuszko, a Polish Army General and Engineer, to design the fortifications for West Point in 1778. Washington himself transferred his headquarters to West Point in 1779.

Continental soldiers built forts, batteries and redoubts and fashioned an iron chain across the Hudson to prevent the British from separating the colonies. The chain, known as the Great Chain, was placed in the river on April 30, 1778, measured approximately 1,600 feet, and weighed between 180 and 186 tons. At the end of the Revolutionary War in 1783, the materials used to construct West Point were sold in an attempt to recoup some funds. Although West Point continued to be occupied, its importance as a strategic point along the Hudson River would not be a focus until 1794 when tensions between France and England began to rise in Europe.

Fortress West Point was never captured by the British, and remains the oldest continuously occupied military post in America.

Several soldiers and legislators, including George Washington, Henry Knox, Alexander Hamilton and John Adams, desiring to eliminate America's wartime reliance on foreign engineers and artillerists, urged the creation of an institution devoted to the arts and sciences of warfare. President Thomas Jefferson signed legislation establishing the United States Military Academy at West Point in 1802. He took this action after ensuring that those attending the Academy would be representative of a democratic society. The U.S. Military Academy at West Point is the United States of America’s oldest service academy.

In 1937, the West Point Bullion Depository was constructed just outside the northern most gate of West Point; in 1988, it became the West Point Mint, as a branch of the United States Mint. 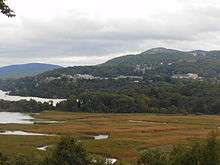 There were 685 households out of which 75.1% had children under the age of 18 living with them, 87.8% were married couples living together, 4.8% had a female householder with no husband present, and 5.7% were non-families. 5.4% of all households were made up of individuals and none had someone living alone who was 65 years of age or older. The average household size was 3.69.