For other uses, see Cornwall (disambiguation).

Cornwall-on-Hudson is a riverfront village in the town of Cornwall, Orange County, New York. It lies on the west bank of the Hudson River about 50 miles (80 km) north of New York City.

The population as of the 2010 census was 3,018. It is part of the Poughkeepsie–Newburgh–Middletown, NY Metropolitan Statistical Area as well as the larger New York–Newark–Bridgeport, NY-NJ-CT-PA Combined Statistical Area.

Cornwall-on-Hudson seen from Breakneck Ridge, across the river

The village was part of the Governor Dongan tract of 1685. Willisville was an early name for Cornwall-on-Hudson. Settlement in the area occurred at Cornwall Landing, a hamlet on the Hudson River below Butter Hill. It was the only river landing in the town. In the early 1800s, Daniel Tobias sailed a sloop from Cornwall Landing. As there was no direct communication between the river and the table-land above, in 1807, his brother, Isaac S. Tobias, built a road, at his own expense, as far as the first bridge on the road to Willisville.[1] The Mead and Taft Company lumberyard once employed 500 people at the Landing. Cornwall Landing became a commercial hub with its own post office. The Landing began to decline after World War II when passenger train service ended, and Conrail demolished the buildings. Cornwall-on-Hudson incorporated as a village in 1885, within the Town of Cornwall. 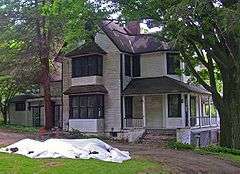 The Amelia Barr House, also known as "Cherry Croft", is located on Mountain Road in Cornwall-on-Hudson, on the slopes of Storm King Mountain. Barr, an American writer born in the 19th century, lived here during the most prolific and successful period of her career. In 1982 it was added to the National Register of Historic Places.

Camp Olmsted is a summer camping facility in Cornwall-on-Hudson, New York, operated by the Five Points Mission, a Methodist organization. It is located along Bayview Avenue, NY-218, near Storm King Mountain. It was founded in 1901. Siblings Sarah and John Olmsted donated the 21-acre (8 ha) parcel. Campers would take the Hudson River Day Line ferry from the city to Cornwall and then proceed to the camp. In 1966 the New York City Society took a role in operating the camp. The camp was added to the National Register of Historic Places in 1982.

According to the United States Census Bureau, the village has a total area of 2.1 square miles (5.4 km2), of which 2.0 square miles (5.2 km2) is land and 0.1 square miles (0.26 km2) (5.31%) is water. The zip code is 12520. Located just 50 miles (80 km) north of New York City, the village borders the west shore of the Hudson River. It is one of the most affluent communities in the Orange County area. While the village is primarily residential, it has a small commercial center and many riverfront homes adjacent to Donahue Memorial Park, formerly known as Cornwall Landing. NY-218 passes through the village and US Route 9W passes through the Town of Cornwall west of the village. Storm King State Park lies south of the village, and, below that, the United States Military Academy.

There were 1,181 households out of which 34.2% had children under the age of 18 living with them, 58.0% were married couples living together, 8.9% had a female householder with no husband present, and 30.2% were non-families. 25.8% of all households were made up of individuals and 9.5% had someone living alone who was 65 years of age or older. The average household size was 2.58 and the average family size was 3.14. 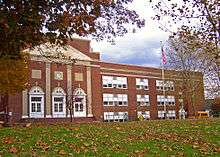