All of Manhattan, as seen from the west

The Far West Side would have been the location of West Side Stadium, which was intended as the Olympic stadium for the New York City bid for the 2012 Summer Olympics. After the rejection of the $2 billion stadium plan that would also lure the New York Jets to Manhattan, developers made plans, including the Hudson Yards Redevelopment Project, to redevelop the West Side with a mix of commercial and residential buildings. 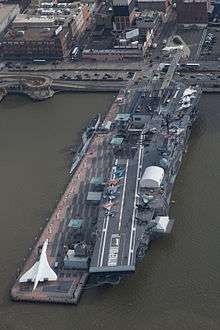 Aerial view of the Intrepid Museum

Jeffery Sweet's one-act play "Cover" references this area of New York. The Intrepid Museum is located in the West Side and houses many ships and aircraft, including the Concorde, USS Intrepid and the Space Shuttle.