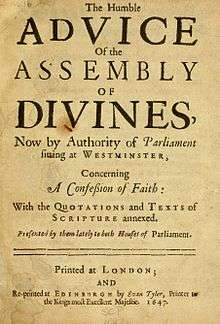 Title page of a 1647 printing of the Confession

In 1643, the English Parliament called upon "learned, godly and judicious Divines", to meet at Westminster Abbey in order to provide advice on issues of worship, doctrine, government and discipline of the Church of England. Their meetings, over a period of five years, produced the confession of faith, as well as a Larger Catechism and a Shorter Catechism. For more than three hundred years, various churches around the world have adopted the confession and the catechisms as their standards of doctrine, subordinate to the Bible.

The Westminster Confession of Faith was modified and adopted by Congregationalists in England in the form of the Savoy Declaration (1658). Likewise, the Baptists of England modified the Savoy Declaration to produce the Second London Baptist Confession (1689). English Presbyterians, Congregationalists, and Baptists would together (with others) come to be known as Nonconformists, because they did not conform to the Act of Uniformity (1662) establishing the Church of England as the only legally approved church, though they were in many ways united by their common confessions, built on the Westminster Confession.

Herbert, John Rogers, RA (c. 1844), The Assertion of Liberty of Conscience by the Independents at the Westminster Assembly of Divines (painting) .

During the English Civil War (1642–1649), the English Parliament raised armies in an alliance with the Covenanters who by then were the de facto government of Scotland, against the forces of Charles I, King of England, Scotland and Ireland. The purpose of the Westminster Assembly, in which 121 Puritan clergymen participated, was to provide official documents for the reformation of the Church of England. The Church of Scotland had recently overthrown the bishops imposed by the King and reinstated presbyterianism (see Bishops' Wars). For this reason, as a condition for entering into the alliance with the English Parliament, the Scottish Parliament formed the Solemn League and Covenant with the English Parliament, which meant that the Church of England would abandon episcopalianism and consistently adhere to Calvinistic standards of doctrine and worship. The Confession and Catechisms were produced in order to secure the help of the Scots against the king.

The Scottish Commissioners who were present at the Assembly were satisfied with the Confession of Faith, and in 1646, the document was sent to the English parliament to be ratified, and submitted to the General Assembly of the Scottish Kirk. The Church of Scotland adopted the document, without amendment, in 1647. In England, the House of Commons returned the document to the Assembly with the requirement to compile a list of proof texts from Scripture. After vigorous debate, the Confession was then in part adopted as the Articles of Christian Religion in 1648, by act of the English parliament, omitting section 4 of chapter 20 (Of Christian Liberty), sections 4–6 of chapter 24 (Of Marriage and Divorce), and chapters 30 and 31 (Of Church Censures and Of Synods and Councils). The next year, the Scottish parliament ratified the Confession without amendment.

In 1660, restoration of the British monarchy and Anglican episcopacy resulted in the nullification of these acts of the two parliaments. However, when William of Orange replaced the Roman Catholic King James VII of Scotland and II of England on the thrones of Scotland, England and Ireland, he gave royal assent to the Scottish parliament's ratification of the Confession, again without change, in 1690.[1]

The confession is a systematic exposition of Calvinist orthodoxy (which neo-orthodox scholars refer to as "scholastic Calvinism"), influenced by Puritan and covenant theology.

It includes doctrines common to most of Christendom such as the Trinity and Jesus' sacrificial death and resurrection, and it contains doctrines specific to Protestantism such as sola scriptura and sola fide. Its more controversial features include the covenant of works with Adam, the Puritan doctrine that assurance of salvation is not a necessary consequence of faith, a minimalist conception of worship, and a strict sabbatarianism.

It states that the Pope is the Antichrist, which was a very common belief in seventeenth-century England.[2] It also stated that the Roman Catholic mass is a form of idolatry, that the civil magistrates have divine authority to punish heresy, and rules out marriage with non-Christians. These formulations were repudiated by several bodies which adopted the confession (for instance, the Church of Scotland, though its ministers are still free to adhere to the full confession and some do), but the confession remains part of the official doctrine of some other Presbyterian churches. For example, the Presbyterian Church of Australia holds to the Westminster Confession of Faith as its standard, subordinate to the Word of God, and read in the light of a declaratory statement.[3]

Holy Scriptures, the Trinity and predestination

The confession begins with a definition of the Bible's content as well as an explication of its role within the church. Chapter 1 declares that the Bible, both Old and New Testaments, is the inspired, written Word of God. As the Word of God, the Bible is considered "the rule of faith and life." The Holy Scriptures are said to possess infallible truth and divine authority, containing "all things necessary for [God's] own glory, man's salvation, faith, and life", so that no new revelations or human traditions can be added to it. The Confession of Faith states that, in the original languages, the Bible was kept pure and authentic. Because of this, the Scriptures alone are the church's final authority in all religious disputes. The confession states that "the Holy Spirit speaking in the Scripture" is "the supreme judge" of councils, ancient writers, doctrines, and private revelation.[4]

After describing the attributes of God, chapter 2 of the confession endorses the traditional doctrine of the Trinity, which holds that the one and only God exists as three persons, "of one substance, power, and eternity", namely, God the Father, God the Son, and God the Holy Spirit.[5]

Chapter 3 affirms the Reformed doctrine of predestination: that God foreordained who would be among the elect (and therefore saved), while he passed by those who would be damned for their sins. The confession states that from eternity God did "freely, and unchangeably ordain whatsoever comes to pass". By God's decree, "some men and angels are predestinated unto everlasting life; and others foreordained to everlasting death."[6]

Chapter 4 recounts the Genesis creation narrative and affirms that human beings were created in the image of God with immortal souls, having fellowship with God and dominion over other creatures.[7] Chapter 6 recounts the Fall of Man whereby humans committed original sin and became subject to total depravity. According to the confession, the consequence of the fall and sin is that sinners are guilty before God, under divine wrath and the curse of the law, and, ultimately, subject to spiritual death.[8] The confession states that the fall and all other sins were foreordained by divine providence; however, the confession also teaches that sin "proceedeth only from the creature, and not from God". God cannot be the author of sin because he is entirely holy and righteous.[9]

Chapter 7 is a description of covenant theology, which holds that God has dealt with humans through various covenants. In the first covenant, a covenant of works, Adam and his descendants were promised life on the condition of perfect obedience. The fall made it impossible for man to keep this covenant, so God made another covenant, this one called the covenant of grace. In the covenant of grace, God freely offered sinners life and salvation by Jesus Christ. As part of this covenant, God promises to give the elect the Holy Spirit to make them willing and able to believe.[10]

According to the confession, the covenant of grace was administered differently in the time of the law (during Old Testament times) and in the time of the gospel (during and after New Testament times). Under the law, the covenant was administered by promises, prophecies, sacrifices, circumcision, the paschal lamb, and other types and ordinances instituted among the Jewish people. These all anticipated Jesus Christ, the promised Messiah, and were sufficient to give the elect of that time forgiveness of sins and eternal salvation. The confession teaches that under the gospel, the covenant of grace is dispensed more fully through the preaching of the Bible and the administration of the sacraments of baptism and the Lord's Supper.[10]

Chapter 8 declares that Jesus Christ, the second person of the Trinity, was chosen by God the Father to be the mediator between God and man and hold the threefold office of prophet, priest, and king. It affirms his incarnation, virgin birth, and dual nature as both God and man. In his human nature, Christ was without sin. He was crucified and buried, and the confession teaches that he was bodily resurrected and afterward ascended into heaven where he intercedes on behalf of the living. It also teaches that Christ will return to earth to judge the world.[11]

Chapter 8 also describes Christ's sacrificial death as satisfying God's justice and attaining both humanity's reconciliation with God and everlasting life for the elect. Salvation is granted to individuals by means of the word of God and the Holy Spirit, who persuades them to believe and obey.[11] Chapter 9 teaches that human free will was lost in the fall. However, the state of grace restores man's free will, enabling the individual to choose to do good. Nevertheless, complete sinless perfection is only attainable after death in the state of glorification.[12]

The first American Presbyterian ministers were New England Congregationalists, whose congregations originated with the migration from England to the Dutch colony in America as early as the 1640s, and Presbyterian immigrants from Scotland, Ireland and Wales. The first American presbytery, uniting some of these independent congregations and those of the British immigrants, was formed in 1706. This body grew large enough to form the first synod in Philadelphia in 1716. Prior to 1729, some presbyteries required candidates for the ministry to profess adherence to the Westminster Confession. When the Synod of Philadelphia met in 1729 to adopt the Westminster Confession as the doctrinal standard, it required all ministers to declare their approval of the Westminster Confession of Faith and catechisms. At the same time, the Adopting Act allowed candidates and ministers to scruple articles within the Confession. Whether or not the article scrupled was essential or nonessential was judged by the presbytery with jurisdiction over the candidate's examination. This allowance implied a difference, within the standards themselves, between things that are essential and necessary to the Christian faith, and things that are not. This compromise left a permanent legacy to following generations of Presbyterians in America, to decide what is meant by "essential and necessary", resulting in permanent controversies over the manner in which a minister is bound to accept the document; and it has left the American versions of the Westminster Confession more amenable to the will of the church to amend it.

When the Presbyterian Church in the United States of America was formed in 1788, it adopted the Westminster standards, as containing the system of doctrine taught in the Holy Scriptures. However, it revised chapters 20.4, 23.3, and 31.2 of the Confession, basically removing the civil magistrate (i.e., the state) from involvement in ecclesiastical matters. It also removed the phrase "tolerating a false religion" from the list of sins forbidden in Answer 109 of the Larger Catechism, and replaced "depopulations" in Answer 142 with "depredation." The Confession was amended again in 1887, when the final sentence of chapter 24.4, which forbade the marrying of the close kindred of one's deceased spouse, was removed.

The Presbyterian Church in the U.S.A. adopted more sweeping revisions of its Confession in 1903. Chapter 16.7, on the works of unregenerate men, was rewritten. The last sentence of chapter 22.3, which forbade the refusing of a proper oath when imposed by lawful authority, was removed. Chapter 25.6, on the head of the church, was rewritten, and the identification of the Roman Catholic pope as the Antichrist was removed.[13][14]