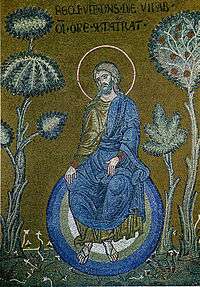 God resting after creation – Christ depicted as the creator of the world, Byzantine mosaic in Monreale, Sicily.

God the Son (Greek: Θεός ὁ υἱός) is the second person of the Trinity in Christian theology. The doctrine of the Trinity identifies Jesus as the metaphysical embodiment of God the Son, united in essence but distinct in person with regard to God the Father and God the Holy Spirit (the first and third persons of the Trinity).

In these teachings, God the Son pre-existed before incarnation, is co-eternal with God the Father (and the Holy Spirit), both before Creation and after the End (see Eschatology). Son of God for some draws attention to his humanity, whereas God the Son refers more generally to his divinity, including his pre-incarnate existence.

Source of the term

The term in English follows Latin usage as found in the Athanasian Creed and other texts of the early church:

The distinction holds true in other modern languages apart from English, for example:

Use of the term

The term is used by Saint Augustine in his On the Trinity, for example in discussion of the Son's obedience to God the Father: deo patri deus filius obediens.[7]

Jacques Forget (1910) in the Catholic Encyclopedia article "Holy Ghost" notes that "Among the apologists, Athenagoras mentions the Holy Ghost along with, and on the same plane as, the Father and the Son. 'Who would not be astonished', says he (A Plea for the Christians 10), 'to hear us called atheists, us who confess God the Father, God the Son and the Holy Ghost, and hold them one in power and distinct in order.' "[8] Saint Augustine in Sermon 90 on the New Testament says, "2. For hold this fast as a firm and settled truth, if you would continue Catholics, that God the Father begot God the Son without time, and made Him of a Virgin in time."[9]

The Augsburg Confession (1530) adopted the phrase as Gott der Sohn.[10] 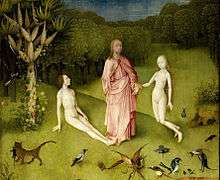 In medieval art God the Son is depicted as Christ as here in The Garden of Earthly Delights by Hieronymus Bosch. 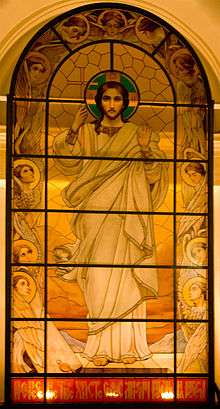 A manuscript variant in John 1:18 (Θεὸν οὐδεὶς ἑώρακεν πώποτε· μονογενὴς Θεὸς ὁ ὢν εἰς τὸν κόλπον τοῦ Πατρὸς, ἐκεῖνος ἐξηγήσατο) has led to translations including "God the One and Only" (NIV, 1984) referring to the Son.[11]

But the term "Son of God" is used to refer to Jesus in the first gospel of Mark at the beginning in verse 1:1 and at its end in chapter 15 verse 39. Max Botner wrote, "Indeed, if Mark 1:1 presents the "normative understanding" of Jesus' identity, then it makes a significant difference what the text includes".[12]

Later theological use of this expression (compare Latin: Deus Filius) reflects what came to be the standard interpretation of New Testament references, understood to imply Jesus' Divinity, but with the distinction of his person from another Person of the Trinity called the Father. As such, the title is associated more with the development of the doctrine of the Trinity. A clear expression of a Trinitarian belief is found in Matthew 28:19, "Go, therefore, and make disciples of all nations, baptizing them in the name of the Father, and of the Son, and of the Holy Spirit." John the Evangelist is understood to identify Jesus with the pre-existent Logos or Word, the second person of the Trinity, "In the beginning was the Word, and the Word was with God, and the Word was God."[John 1:1]