For other uses, see Curse (disambiguation). 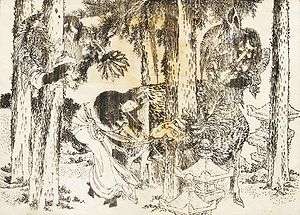 A curse (also called an imprecation, malediction, execration, malison, anathema, or commination) is any expressed wish that some form of adversity or misfortune will befall or attach to some other entity: one or more persons, a place, or an object. In particular, "curse" may refer to such a wish or pronouncement made effective by a supernatural or spiritual power, such as a god or gods, a spirit, or a natural force, or else as a kind of spell by magic or witchcraft; in the latter sense, a curse can also be called a hex or a jinx. In many belief systems, the curse itself (or accompanying ritual) is considered to have some causative force in the result. To reverse or eliminate a curse is sometimes called "removal" or "breaking", and is often believed to require elaborate rituals or prayers.[1] 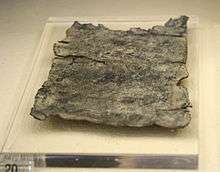 The study of the forms of curses comprise a significant proportion of the study of both folk religion and folklore. The deliberate attempt to levy curses is often part of the practice of magic. In Hindu culture the Sage or Rishi is believed to have the power to bless and curse. Examples include the curse placed by Rishi Bhrigu on king Nahusha[2] and the one placed by Rishi Devala.[3] Special names for specific types of curses can be found in various cultures:

Curse to the United States presidency

Tecumseh's curse was reputed to cause the deaths in office of Presidents of the United States elected in years divisible by 20, beginning in 1840. This alleged curse appears to have fallen dormant, since Ronald Reagan, (elected in 1980) survived an assassination attempt and George W. Bush (elected in 2000) survived his eight-year presidency.

Curses as a plot device

Arguably, Sleeping Beauty and Beauty and the Beast represent spells, rather than curses. The difference between an adverse spell and a curse is that a pure curse is one where an ordinary person of no particular magical ability places a generalized curse over another character that some bad luck shall befall him or her. By contrast an adverse spell involves a character with some magical ability or power causing a particularized harm to another character.

A number of curses are used to explain the failures or misfortunes of specific sports teams, players, or even cities. For example: 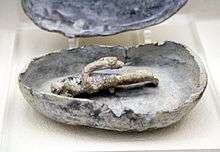 Ancient Greek cursed object against enemies in a trial, written on a lead figurine put in a lead box, 420-410 BC, Kerameikos Archaeological Museum, Athens.

Cursed objects are generally supposed to have been stolen from their rightful owners or looted from a sanctuary. The Hope Diamond is supposed to bear such a curse, and bring misfortune to its owner. The stories behind why these items are cursed vary, but they usually are said to bring bad luck or to manifest unusual phenomena related to their presence. Busby's stoop chair was reportedly cursed by the murderer Thomas Busby shortly before his execution so that everyone who would sit in it would die. 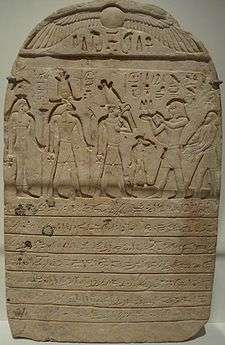 Limestone donation-stele from Mendes, 3rd Intermediate Period, Dynasty XXII. The inscription celebrates a donation of land to an Egyptian temple, and places a curse on anyone who would misuse or appropriate the land.

There is a broad popular belief in curses being associated with the violation of the tombs of mummified corpses, or of the mummies themselves. The idea became so widespread as to become a pop-culture mainstay, especially in horror films (though originally the curse was invisible, a series of mysterious deaths, rather than the walking-dead mummies of later fiction). The "Curse of the Pharaohs" is supposed to have haunted the archeologists who excavated the tomb of Pharaoh Tutankhamun, whereby an imprecation was supposedly pronounced from the grave by the ancient Egyptian priests, on anyone who violated its precincts. Similar dubious suspicions have surrounded the excavation and examination of the (natural, not embalmed) Alpine mummy, "Ötzi the Iceman". While such curses are generally considered to have been popularized and sensationalized by British journalists of the 19th century, ancient Egyptians were in fact known to place curse inscriptions on markers protecting temple or tomb goods or property.

According to the Catholic Encyclopedia article Cursing, the Bible depicts God cursing the serpent, the earth, and Cain (Genesis 3:14, 3:17,[6] 4:11). Similarly Noah curses Canaan (Genesis 9:25), and Joshua curses the man who should build the city of Jericho (Joshua 6:26-27). In various books of the Old Testament there are long lists of curses against transgressors of the Law (Leviticus 26:14-25, Deuteronomy 27:15, etc.). So, too, in the New Testament, Christ curses the barren fig-tree (Mark 11:14), pronounces his denunciation of woe against the incredulous cities (Matthew 11:21), against the rich, the worldling, the scribes and the Pharisees, and foretells the awful malediction that is to come upon the damned (Matthew 25:41). The word curse is also applied to the victim of expiation for sin (Galatians 3:13), to sins temporal and eternal (Genesis 2:17; Matthew 25:41)."[7]