In mathematics, in particular the theory of Lie algebras, the Weyl group of a root system Φ is a subgroup of the isometry group of the root system. Specifically, it is the subgroup which is generated by reflections through the hyperplanes orthogonal to the roots, and as such is a finite reflection group. Abstractly, Weyl groups are finite Coxeter groups, and are important examples of these.

It is named after Hermann Weyl.

Removing the hyperplanes defined by the roots of Φ cuts up Euclidean space into a finite number of open regions, called Weyl chambers. These are permuted by the action of the Weyl group, and it is a theorem that this action is simply transitive.[1] In particular, the number of Weyl chambers equals the order of the Weyl group. Any non-zero vector v divides the Euclidean space into two half-spaces bounding the hyperplane v∧ orthogonal to v, namely v+ and v−. If v belongs to some Weyl chamber, no root lies in v∧, so every root lies in v+ or v−, and if α lies in one then −α lies in the other. Thus Φ+ := Φ∩v+ consists of exactly half of the roots of Φ. Of course, Φ+ depends on v, but it does not change if v stays in the same Weyl chamber. The base of the root system with respect to the choice Φ+ is the set of simple roots in Φ+, i.e., roots which cannot be written as a sum of two roots in Φ+. Thus, the Weyl chambers, the set Φ+, and the base determine one another, and the Weyl group acts simply transitively in each case. The following illustration shows the six Weyl chambers of the root system A2, a choice of v, the hyperplane v∧ (indicated by a dotted line), and positive roots α, β, and γ. The base in this case is {α,γ}. 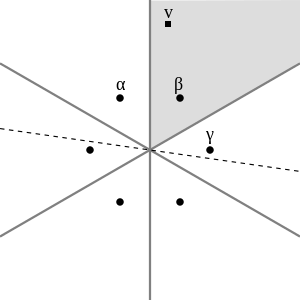 Weyl groups are examples of finite reflection groups, as they are generated by reflections; the abstract groups (not considered as subgroups of a linear group) are accordingly finite Coxeter groups, which allows them to be classified by their Coxeter–Dynkin diagram.

Concretely, being a Coxeter group means that a Weyl group has a special kind of presentation in which each generator xi is of order two, and the relations other than xi2 are of the form (xixj)mij. The generators are the reflections given by simple roots, and mij is 2, 3, 4, or 6 depending on whether roots i and j make an angle of 90, 120, 135, or 150 degrees, i.e., whether in the Dynkin diagram they are unconnected, connected by a simple edge, connected by a double edge, or connected by a triple edge.

The Weyl group of the Lie algebra

is the symmetric group on n elements, Sn. The action can be realized as follows. If

is the Cartan subalgebra of all diagonal matrices with trace zero, then Sn acts on

via conjugation by permutation matrices. This action induces an action on the dual space

, which is the required Weyl group action.

For a Lie algebra, the Weyl group is the reflection group generated by reflections in the roots – the specific realization of the root system depending on a choice of Cartan subalgebra (maximal abelian).

For a Lie group G satisfying certain conditions,[note 1] given a torus T < G (which need not be maximal), the Weyl group with respect to that torus is defined as the quotient of the normalizer of the torus N = N(T) = NG(T) by the centralizer of the torus Z = Z(T) = ZG(T),

The group W is finite – Z is of finite index in N. If T = T0 is a maximal torus (so it equals its own centralizer:

) then the resulting quotient N/Z = N/T is called the Weyl group of G, and denoted W(G). Note that the specific quotient set depends on a choice of maximal torus, but the resulting groups are all isomorphic (by an inner automorphism of G), since maximal tori are conjugate.

If B is a Borel subgroup of G, i.e., a maximal connected solvable subgroup and a maximal torus T = T0 is chosen to lie in B, then we obtain the Bruhat decomposition

which gives rise to the decomposition of the flag variety G/B into Schubert cells (see Grassmannian).

The structure of the Hasse diagram of the group is related geometrically to the cohomology of the manifold (rather, of the real and complex forms of the group), which is constrained by Poincaré duality. Thus algebraic properties of the Weyl group correspond to general topological properties of manifolds. For instance, Poincaré duality gives a pairing between cells in dimension k and in dimension n - k (where n is the dimension of a manifold): the bottom (0) dimensional cell corresponds to the identity element of the Weyl group, and the dual top-dimensional cell corresponds to the longest element of a Coxeter group.

For a non-abelian connected compact Lie group G, the first group cohomology of the Weyl group W with coefficients in the maximal torus T used to define it,[note 2] is related to the outer automorphism group of the normalizer

); for simple Lie groups it has order 1, 2, or 4. The 0th and 2nd group cohomology are also closely related to the normalizer.[4]