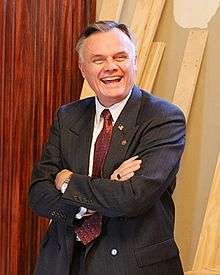 The White House Chief Usher is the head of household staff and operations at the White House, the official residence and principal workplace of the President of the United States of America.

About the Chief Usher

Although the White House has had staff since it opened, the head of household operations for most of the 1800s was the First Lady of the United States. The position of Chief Usher was not established until 1891, in the administration of President Benjamin Harrison.[1] However, the title "Chief Usher" was not formalized until later. The term "chief usher" had been used by the press as early as August 1887.[2] The official title, "Chief Usher", was not created until 1897.[3] William Dubois was the first to use the official title, but it applied only for the last four of his five years in the role. Thomas E. Stone was the first individual to have the official title of "Chief Usher" bestowed on him throughout his tenure.

The Office of the Chief Usher is one of 60 offices within EOP, an executive branch agency which provides operational (rather than policy) support to the President and First Family.[11] Physically, the Chief Usher is located in the Usher's Office on the State Floor of the White House, near the Cross Hall and Entrance Hall and beside the entrance to the North Portico.[4][12]

The Chief Usher serves at the pleasure of the President, and has no job tenure or civil service protections.[13][4] The Chief Usher has a personal staff of seven,[4] but oversees a total Executive Residence staff of about 90.[14]

The Chief Usher is charged with "the effective operation of the White House Complex and Executive Residence... [The Chief Usher] develops and administers the budget for the operation, maintenance, and utilities and supervises the Executive Residence staff."[13][15] The Chief Usher is responsible for creating the budget for the office of The Executive Residence, overseeing disbursements from the budget, the purchase of supplies, ensuring the physical safety and integrity of the White House's decorative arts and furnishings collections (including theft prevention), and the generation of hand-written (but not printed) White House items such as menus, placards, or invitations.[4] The Chief Usher oversees the First Family's private as well as public life, meeting the private needs of the family and working to ensure that public and private events do not conflict.[13] Generally, the Chief Usher hosts a meeting with all White House offices early on every Monday morning to review the week's events and ensure that there are no problems.[16]

The Chief Usher's budgetary duties are extensive. The Chief Usher oversaw an Executive Residence budget of $16.4 million in 2001. Overtime is extensive: In 2001, 19 work-years of overtime were budgeted. The Chief Usher also works closely with the Office of the Social Secretary to ensure that expenditures are charged to the correct government agency. For example, costs for a State Dinner must be charged to the United States Department of State, rather than The Executive Residence. The First Family may host an event at the White House, but the event might actually be paid for an external sponsor. Political events at the White House must be paid for by the sponsoring political party. The rules governing charges are extensive and onerous. After it learned that many government agencies and external sponsors had unpaid bills at the White House (some going back more than a decade), Congress enacted legislation in 1988 that requires sponsoring agencies or organizations to pay for charges in advance. Severe financial penalties are imposed if the sponsor fails to pay overages in a timely fashion.[16]

The Chief Usher is an ex officio member of the Committee for the Preservation of the White House, which coordinates the decoration, maintenance, refurbishment, and historic preservation of the White House. Other members of the committee include the White House Office of the Curator, Secretary of the Smithsonian Institution, Chairman of the United States Commission of Fine Arts, and Director of the National Gallery of Art, with whom the Chief Usher works closely.[23][24] Once a month, the Chief Usher hosts a meeting with the National Park Service (which owns the main White House building and its grounds), the General Services Administration (which owns the East Wing, West Wing, and ancillary buildings scattered in the South Lawn; the Eisenhower Executive Office Building; the New Executive Office Building; the Blair House; and various other government-owned townhouses and structures on Jackson Place NW), the Secret Service, and the White House Military Office to review maintenance, repair, security, and other needs at the White House and plan for upkeep.[25]