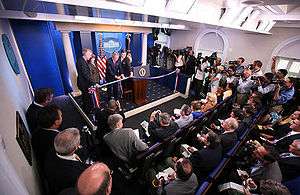 President George W. Bush participates in the unveiling of the new Brady Briefing Room on July 11, 2007. 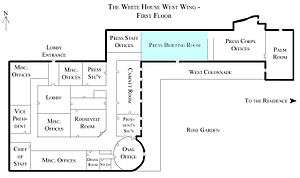 Between the Presidency of Woodrow Wilson to 1969, communications from the President and general Press news conferences took place in the Indian Treaty Room, the State Department auditorium and the White House East Room [1]

In 1969, to accommodate the growing number of reporters assigned to the White House, President Richard Nixon had the indoor swimming pool, which had been installed by the March of Dimes for Franklin D. Roosevelt, covered and turned into press offices and a lounge that could double as a briefing room.[2][3]

In 2000, the room was renamed the "James S. Brady Press Briefing Room" in honor of James Brady, the press secretary who was shot and permanently disabled during an assassination attempt on President Ronald Reagan in 1981.[3]

In December 2005, the White House announced the intention to renovate the aging Press Briefing Room and cramped press corps offices.[1] On August 2, 2006, the final briefing was held, and President George W. Bush hosted several previous press secretaries at a closing ceremony and there was some hesitation and concern about whether the press would be allowed to return to the White House.[4][5] In the interim the White House Conference Center was used as temporary location for press conferences.

President Bush reopened the renovated room in a ribbon-cutting ceremony on the morning of July 11, 2007. He held his first formal press conference in the new briefing room the next day, following the release of a report on the progress of the Iraqi government.[6] The modernization cost nearly $8.5 million. Of that sum, $2.5 million was funded by the media, and the remainder was funded by tax dollars. Each correspondent's seat was priced at $1,500. Beneath the current press room lies the former White House swimming pool that has since become a computer server room.[7][8]

The most noticeable change to the briefing room is a different backdrop for the press conferences, now featuring a softly lit screen flanked by mock columns instead of the previous blue curtain. The new podium also contains video screens for teleconferencing and multimedia displays. For safety reasons, the trapdoor that provided access to the old swimming pool (a popular stop for visitors) was replaced by a discreet staircase.

Despite complaints about the previous briefing room's lack of space, the current briefing room has only one more press seat than it did prior to renovation.