William Edmondson "Grumble" Jones (May 3, 1824 – June 5, 1864) was a planter, a career United States Army officer, and a Confederate cavalry General, killed in the Battle of Piedmont in the American Civil War.

Jones was born in Washington County, Virginia. After graduating from Emory and Henry College in Virginia in 1844, he graduated from the United States Military Academy in 1848, ranking twelfth out of 48 cadets, and was commissioned a brevet Second Lieutenant in the U.S. Mounted Rifles. He served with the cavalry fighting Indians in the west and was promoted to First Lieutenant in 1854. His nickname, "Grumble", reflects his irritable disposition, undoubtedly exacerbated by the death of his wife, who was washed from his arms in a shipwreck shortly after their marriage in 1852 while en route to Texas. He resigned his commission in 1857, and became a farmer near Glade Spring, Virginia.

At the start of the Civil War, Jones joined the 1st Virginia Cavalry Regiment as a Captain, commanding a company he had raised. On May 9 he was promoted to Major in Virginia's Provisional Army, and later that month both Jones and the regiment were transferred into the Confederate Army. Jones served under Col. J.E.B. Stuart in the First Battle of Bull Run in July 1861. The following month he was promoted to the rank of Colonel was given command of the 1st Virginia Cavalry.[1]

In the fall of 1861 the Confederate forces underwent a massive reorganization, during which the enlisted men could elect their officers. As a result, Jones was not re-elected to his post as commander of the 1st Virginia Cavalry. That September he was appointed to command the 7th Virginia Cavalry. He led the regiment into Western Virginia, along the Potomac River. In March 1862 Jones was given command of all cavalry in the Valley District.[2] 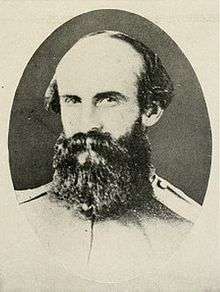 Returning to eastern Virginia, Jones's cavalry was distinguished in the Second Bull Run Campaign; he was wounded in a skirmish at Orange Court House on August 2. He was part of Stuart's ostentatious raid around Maj. Gen. George B. McClellan's army preceding the Seven Days battles. He was promoted to Brigadier General on September 19, 1862, and on November 8, was assigned to command the 4th Brigade of Stuart's Cavalry Division in the Army of Northern Virginia. This brigade was known as Robertson's, or the "Laurel brigade," and consisted entirely of Virginians, formerly commanded by Turner Ashby. Based on the request of Lt. Gen. Thomas J. "Stonewall" Jackson, on December 29, 1862, he assumed command of the Valley District.

In the spring of 1863, Jones and Brig. Gen. John D. Imboden raided the Baltimore and Ohio Railroad west of Cumberland, Maryland, destroying much of the railroad and public property in the area, including the Burning Springs Complex on May 9, 1863.[3] Rejoining Stuart, he fought in the largest cavalry engagement of the war, the Battle of Brandy Station, June 9, 1863, at the start of the Gettysburg Campaign. He was surprised, as was all of Stuart's command, to be hit out of blue by Union cavalry under Maj. Gen. Alfred Pleasonton. Jones's brigade was outnumbered by the division of his West Point classmate, Brig. Gen. John Buford, but it held its own and ended the fight with more horses and more and better small-arms than at the beginning, capturing two regimental colors, an artillery battery, and about 250 prisoners.

As the Gettysburg Campaign continued, Jones screened the Army of Northern Virginia's rear guard during the advance north through the Shenandoah Valley, by holding gaps in the mountains that separated them from Union observation and interference. As the Battle of Gettysburg commenced on July 1, 1863, Jones' brigade crossed the Potomac River at Williamsport, Maryland, but stayed away from the principal battlefield, guarding the trains and Harpers Ferry. Jones was disgruntled that Stuart had not taken him on his movement around the Union flank to join up with General Richard S. Ewell's Second Corps on the Susquehanna River. Before moving into Pennsylvania, General Robert E. Lee ordered Ewell to capture Harrisburg if practicable. The disagreeable Jones often clashed with Stuart. On July 3, Jones's brigade fought a sharp battle with the 6th U.S. Cavalry at Fairfield, Pennsylvania, then again at Funkstown, Maryland, a few days later. After Lee's army completed its retreat back to Virginia, Jones's men fought twice again with Buford at Brandy Station, on August 1 and October 10, 1863.

In October, Stuart's dissatisfaction with Jones reached a boil and he court-martialed Jones for insulting him. Although Grumble was found guilty, Robert E. Lee intervened, and he was transferred to the Trans-Allegheny Department in West Virginia. Jones recruited a brigade of cavalry there and campaigned in eastern Tennessee with Lt. Gen. James Longstreet's forces during the winter and spring of 1864. In May, Jones assumed command of the Confederate forces in the Shenandoah Valley who were defending against the halting advance of Maj. Gen. David Hunter towards Lynchburg, Virginia, in the Valley Campaigns of 1864. In the Battle of Piedmont on June 5, 1864, Jones was shot in the head and killed while leading a charge against a superior attacking force.

... was an old army officer, brave as a lion and had seen much service, and was known as a hard fighter. He was a man, however, of high temper, morose and fretful. He held the fighting qualities of the enemy in great contempt, and never would admit the possibility of defeat where the odds against him were not much over two to one.[4]

A street in Centreville, Virginia is named Grumble Jones Court.[5]