Gordon was descended from an ancient Scottish lineage, and was born on his father Zachariah Gordon's farm in Upson County, Georgia, the fourth of twelve children. Many Gordon family members fought in the Revolutionary War. His family moved to Walker County, Georgia in the 1840s, where his father owned a plantation with 18 slaves at the time of the 1840 census.[2] He was an outstanding student at the University of Georgia, where he was a member of the Mystical 7 Society, but left before graduating. He studied law in Atlanta and passed the bar examination. Gordon and his father, Zachariah, invested in a series of coal mines in Tennessee and Georgia. He also practiced law. Gordon married Rebecca "Fanny" Haralson, daughter of Hugh Anderson Haralson, in 1854, and they had a long and happy marriage.[3] They had six children.[4]

Although lacking military education or experience, Gordon was elected captain of a company of mountaineers and quickly climbed from captain to brigadier general (November 1, 1862), to major general (May 14, 1864). Though Gordon himself often claimed he was promoted to lieutenant general, there is no official record of this occurring.[6] Gordon was an aggressive general. In 1864, Gordon was described by General Robert E. Lee in a letter to Confederate President Jefferson Davis as being one of his best brigadiers, "characterized by splendid audacity".

Gordon commanded the 6th Alabama in 1862. During the subsequent Seven Days Battles, as Gordon strode fearlessly among his men, enemy bullets shattered the handle of his pistol, pierced his canteen, and tore away part of the front of his coat. He was wounded in the eyes during the assault on Malvern Hill. 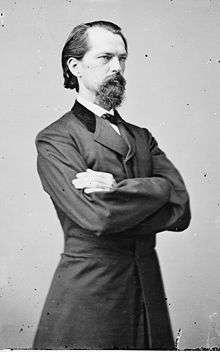 Assigned by General Lee to hold the vital sunken road, or "Bloody Lane", during the Battle of Antietam, Gordon's propensity for being wounded reached new heights. First, a Minié ball passed through his calf. Then, a second ball hit him higher in the same leg. A third ball went through his left arm. He continued to lead his men despite the fact that the muscles and tendons in his arm were mangled, and a small artery was severed by this ball. A fourth ball hit him in his shoulder. Despite pleas that he go to the rear, he continued to lead his men. He was finally stopped by a ball that hit him in the face, passing through his left cheek and out his jaw. He fell with his face in his cap and might have drowned in his own blood if it had not drained out through a bullet hole in the cap. A Confederate surgeon thought he would not survive but after he was returned to Virginia, he was nursed back to health by his wife.[7]

After months of recuperation, in June 1863 Gordon led a brigade of Georgians in Jubal A. Early's division during the Confederate invasion of Pennsylvania. His brigade occupied Wrightsville on the Susquehanna River, the farthest east in Pennsylvania any organized Confederate troops would reach. Union militia under Col. Jacob G. Frick burned the mile-and-a-quarter-long covered wooden bridge to prevent Gordon from crossing the river, and the fire soon spread to parts of Wrightsville. Gordon's troops formed a bucket brigade and managed to prevent the further destruction of the town.

At the Battle of Gettysburg on July 1, Gordon's brigade smashed into the XI Corps on Barlow's Knoll. There, he aided the wounded opposing division commander Francis Barlow. This incident led to a story (which many people consider apocryphal) about the two officers meeting later in Washington, D.C., unaware that Barlow had survived the battle. The story was told by Barlow and by Gordon and was published in newspapers and in Gordon's book.

Seated at Clarkson Potter's table, I asked Barlow: "General, are you related to the Barlow who was killed at Gettysburg?" He replied: "Why, I am the man, sir. Are you related to the Gordon who killed me?" "I am the man, sir," I responded. No words of mine can convey any conception of the emotions awakened by those startling announcements. Nothing short of an actual resurrection from the dead could have amazed either of us more. Thenceforward, until his untimely death in 1896, the friendship between us which was born amidst the thunders of Gettysburg was greatly cherished by both.
— John B. Gordon, Reminiscences of the Civil War

Some historians choose to discount this story, despite contemporary accounts and the testimony of both men, because of Gordon's purported tendency to exaggerate in post-war writings and because it is inconceivable to them that Gordon did not know that Barlow subsequently fought against him in the Battle of the Wilderness.

At the start of the 1864 Overland Campaign, in the Battle of the Wilderness, Gordon proposed a flanking attack against the Union right that might have had a decisive effect on the battle, had General Early allowed him freedom to launch it before late in the day. On May 8, 1864, Gordon was given command of Early's division in Lt. Gen. Richard S. Ewell's (later Early's) corps. Gordon's success in turning back the massive Union assault in the Battle of Spotsylvania Court House (the Bloody Angle) prevented a Confederate rout. He left with Early for the Valley Campaigns of 1864 and was wounded August 25, 1864, at Shepherdstown, West Virginia. After having a wound over his right eye dressed, he returned to the battle.[7] Confederate cartographer Jedediah Hotchkiss's official report of the incident stated, "Quite a lively skirmish ensued, in which Gordon was wounded in the head, but he gallantly dashed on, the blood streaming over him." His wife Fanny, accompanying her husband on the campaign as general's wives sometimes did, rushed out into the street at the Third Battle of Winchester to urge Gordon's retreating troops to go back and face the enemy. Gordon was horrified to find her in the street with shells and balls flying about her.

Returning to Lee's army after Early's defeat at the Battle of Cedar Creek, Gordon led the Second Corps of the Army of Northern Virginia until the end of the war. In this role, he defended the line in the Siege of Petersburg and commanded the attack on Fort Stedman on March 25, 1865 (where he was wounded again, in the leg). At Appomattox Court House, he led his men in the last charge of the Army of Northern Virginia, capturing the entrenchments and several pieces of artillery in his front just before the surrender. On April 12, 1865, Gordon's Confederate troops officially surrendered to Bvt. Maj. Gen. Joshua L. Chamberlain, acting for Lt. Gen. Ulysses S. Grant, recorded in moving detail by Chamberlain:

The momentous meaning of this occasion impressed me deeply. I resolved to mark it by some token of recognition, which could be no other than a salute of arms. Well aware of the responsibility assumed, and of the criticisms that would follow, as the sequel proved, nothing of that kind could move me in the least. The act could be defended, if needful, by the suggestion that such a salute was not to the cause for which the flag of the Confederacy stood, but to its going down before the flag of the Union. My main reason, however, was one for which I sought no authority nor asked forgiveness. Before us in proud humiliation stood the embodiment of manhood: men whom neither toils and sufferings, nor the fact of death, nor disaster, nor hopelessness could bend from their resolve; standing before us now, thin, worn, and famished, but erect, and with eyes looking level into ours, waking memories that bound us together as no other bond;—was not such manhood to be welcomed back into a Union so tested and assured? Instructions had been given; and when the head of each division column comes opposite our group, our bugle sounds the signal and instantly our whole line from right to left, regiment by regiment in succession, gives the soldier's salutation, from the "order arms" to the old "carry"—the marching salute. Gordon at the head of the column, riding with heavy spirit and downcast face, catches the sound of shifting arms, looks up, and, taking the meaning, wheels superbly, making with himself and his horse one uplifted figure, with profound salutation as he drops the point of his sword to the boot toe; then facing to his own command, gives word for his successive brigades to pass us with the same position of the manual,—honor answering honor. On our part not a sound of trumpet more, nor roll of drum; not a cheer, nor word nor whisper of vain-glorying, nor motion of man standing again at the order, but an awed stillness rather, and breath-holding, as if it were the passing of the dead!
— Joshua L. Chamberlain, The Passing of the Armies, pp. 260-61

It is exceedingly difficult to determine Gordon's exact role in the Klan, but given the nature of his testimony, his almost constant travel throughout Georgia and the South, and his desire to maintain peace, social order, and white supremacy, one can conclude with reasonable certainty that he was at least titular head of the Georgia Ku Klux Klan. Even so, he probably had little knowledge of and little control over the local klaverns, as this terrorist association was never fully organized. Although it is remotely possible that Gordon was unaware of the threats and violence southern whites so often employed against southern blacks, it seems more plausible that Gordon simply "looked the other way" and countenanced such excesses as the price that had to be paid if social peace—a peace determined and defined exclusively by southern whites—was to be regained and preserved. Gordon may not have condoned the violence employed by Klan members, but he did not question or oppose it when he felt it was justified. In this sense, Gordon typified the upper levels of Southern society: he would do what had to be done to assure a white-controlled social order, but he hoped it could be accomplished without violence.

As the government of the State of Georgia was being reconstituted for readmission to the Union, Gordon ran for governor in 1868, but was defeated. He was a firm opponent of Reconstruction and endorsed measures to preserve white-dominated society, including restrictions on freedmen and the use of violence. Gordon was thought to be the titular head of the Ku Klux Klan in Georgia,[8] but the organization was so secretive that his role was never proved conclusively. During congressional testimony in 1871, Gordon denied any involvement with the Klan, but did acknowledge he was associated with a secret "peace police" organization whose sole purpose was the "preservation of peace."[9]

Gordon was elected to the U.S. Senate in 1873, and in 1879 became the first ex-Confederate to preside over the Senate. He was a strong supporter of the "New South" and industrialization.

Gordon resigned as U.S. senator on May 19, 1880. Word of his unexpected resignation had barely reached back to Georgia before Governor Alfred H. Colquitt had appointed Joseph E. Brown to succeed Gordon. Almost instantly, cries of corruption were heard when it was discovered Gordon resigned to promote a venture for the Georgia Pacific Railway.[10]

He was elected Governor of Georgia in 1886 and returned to the U.S. Senate from 1891 to 1897. In 1903 Gordon published an account of his Civil War service entitled Reminiscences of the Civil War.[11] He engaged in a series of popular speaking engagements throughout the country.[12]

General Gordon was the first Commander-in-Chief of the United Confederate Veterans when the group was organized in 1890 and held this position until his death.[13] He died while visiting his son in Miami, Florida, at the age of 71,[14] and was buried in Oakland Cemetery in Atlanta, Georgia; upwards of 75,000 people viewed and took part in the memorial ceremonies. 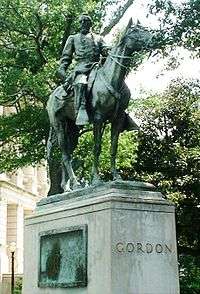 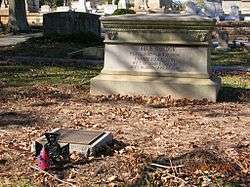 A more gallant, generous, and fearless gentleman and soldier has not been seen by our country.[17]
— President Theodore Roosevelt