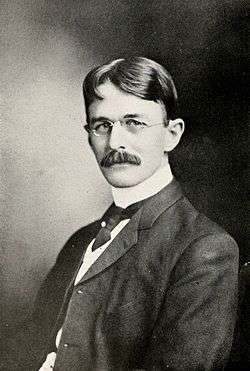 William Hayes Pope (June 14, 1870 – September 13, 1916) was an American lawyer and judge. He served as the last Chief Justice of New Mexico Territory, and the first federal judge in New Mexico after it attained statehood.

Pope was born in Beaufort, South Carolina to Joseph James Pope, a lawyer, and Emily Hayes (Mikell).[1][2] He received a M.A. from the University of Georgia in 1889, followed by an LL.B. from its School of Law in 1890.[3] He also taught at the University of Georgia as an adjunct professor of ancient languages from 1889 to 1890, when he was admitted to the bar.[1] He then practiced law in Atlanta, Georgia.[3]

He moved to Sante Fe in New Mexico Territory in 1894, apparently seeking a climate that was better for his health.[2] He practiced law there until 1896 in the firm Victory & Pope, with senior partner John P. Victory.[4] Their partnership was also a public one; Victory was then the territory's attorney general, and Pope served as the Assistant Attorney General from 1895 to 1897.[1] During that period, he served as a commissioner from New Mexico to the Atlanta Exposition in 1895, and on the Capitol Rebuilding Commission from 1895 to 1900.[1]

In March 1896, Pope was appointed by the U.S. Attorney General to serve as a special assistant U.S. Attorney in the United States Court of Private Land Claims, from which Pope resigned in June 1902.[4] He was then appointed by the Secretary of the Interior as a special U.S. attorney to represent the interests of the Pueblo Indians of New Mexico Territory, from 1901 to 1902.[4]

In June 1902, Governor-General of the Philippines William Howard Taft appointed Pope to a judgeship on the Court of First Instance, Philippine Islands. Pope established a friendship with Taft during his service there.[2] He returned to the U.S. in July 1903, and in October was appointed by President Theodore Roosevelt as an associate justice on the New Mexico Territorial Supreme Court.[4] Pope was elevated to Chief Justice in 1910, and served in that capacity until 1912.[3]

Pope was the first judge appointed to the United States District Court for the District of New Mexico, upon its creation in 1912 when New Mexico attained statehood.[5] Taft, now President, nominated Pope to the court on January 22, 1912.[3] His nomination received some opposition. Ten prominent New Mexico lawyers accused Pope of delaying decisions in submitted cases (despite his reputation to the contrary), and Pope's support of prohibition may have also been an issue.[2] The Senate nevertheless confirmed him on February 20, 1912, and he received his commission the same day. He served as the district court's sole judge until his death on September 13, 1916, in Atlanta, Georgia.

One of Pope's decisions on the federal bench was reversed by the U.S. Supreme Court, in United States v. Sandoval, 231 U.S. 28 (1913). The issue was whether an 1897 federal law that criminalized the sale of alcohol to Indians applied to the Pueblos in the state of New Mexico. Pope had ruled that the Pueblos were ordinary citizens living on private property, and did not fit into the classes of Indians defined in the 1897 law.[6] In reversing, the Supreme Court held that the Pueblos were a dependent people, which Congress had made clear in the Enabling Act providing for New Mexico's statehood.

Pope was a member of the Independent Order of Odd Fellows, the Elks, Shriners, and a freemason.[1] He was married for eleven years, but had no children.[2] He is buried in Fairview Cemetery in Santa Fe.[2]