The King of Spain granted formal title to the Pueblo people in 1689. Mexico ceded most of what is today New Mexico to the United States in 1848 under the Treaty of Guadalupe Hidalgo. New Mexico was a territory until January 6, 1912, when it became the forty seventh state to be added to the United States. Previous decisions of the US Supreme Court held that the Nonintercourse Act did not restrict the alienability of Pueblo peoples or lands. When the Supreme Court reversed its position in 1913, the land title to much of the state was called into question. Justice Miller of the Supreme Court had previously ruled, "Every person who makes a settlement on any lands belonging, secured, or granted by treaty with the United States to any Indian tribe, or surveys or attempts to survey said lands, or to designate any of the boundaries by marking trees or otherwise, is liable to a penalty of $1,000."[1]

Congress responded in 1924 and 1933 with compromise legislation to extinguish some aboriginal title and to establish procedures for determination and compensation. In United States v. Sandoval, 231 U.S. 28 (1913), the question before the Supreme Court was whether Pueblo lands, which were owned by land grants with the Spanish government and later recognized by the United States after the Mexican–American War, were "owned" by the Pueblo peoples. The case involved the sale of alcohol by a non-Indian, Felipe Sandoval, to the Pueblo of New Mexico at the San Juan Village. Sandoval argued such sales were legal, based on decisions territorial court since 1905. New Mexico become a State in 1912. The Statehood Act acknowledged Pueblo lands as "Indian Country" defined as "distinctly Indian communities, recognized and treated by the government as dependent communities entitled to federal protection." The court ultimately ruled that it was for Congress alone to determine when guardianship over Indians should cease. The citizenship of Indians did not prevent Congress from enacting laws to protect and benefit tribes.

Justice Willis Van Devanter delivered the opinion of the Court. The Court held that the enabling act applied generally applicable federal Indian statutes to the Pueblo.

Sandoval repudiated the prior Supreme Court case of United States v. Joseph (1876), which had held that the Pueblos were not "Indians."[2]

"Bootlegging" of alcohol continued after the decision. The Bureau of Indian Affairs took little action against bootleggers, although tribal courts did mete out punishment.[3] In 1953, the BIA lifted the ban on possession and distribution of alcohol, as part of its "tribalization" policy. 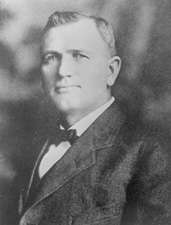 Sandoval, by holding that the Nonintercourse Act applied to the Pueblo, cast a cloud over many non-Indian land titles in New Mexico. In effect, the Court had repudiated the prior view that the Pueblo held land in fee simple and were able to sell land to non-Indians without Congressional approval. The federal government, which viewed the Pueblo title as held by tribes rather than individual Indians, argued that the Nonintercourse Act applied.[4] Further, the federal government viewed the Pueblo as a "domestic dependent nation" within the meaning of Cherokee Nation v. Georgia and Worcester v. Georgia.[5]

The bill was discussed on November 3, 1922 at a meeting of 19 Pueblos in Santo Domingo between. The Pueblos opposed the legislation, publishing "An Appeal for Fair Play and the Preservation of Pueblo Land" on November 5, 1922. John Collier published articles outlining the reasons for the Pueblo's opposition in the Santa Fe New Mexican (November 6) and the New York Times (November 7). Soon thereafter, the hearings for the bill were delayed until February 1923. In the interim, Secretary Fall was replaced.

A compromise bill was created in 1924, which some Pueblos supported. The new bill created a Pueblo Lands Board to resolve disputed claims.

This article is issued from Wikipedia - version of the 9/29/2015. The text is available under the Creative Commons Attribution/Share Alike but additional terms may apply for the media files.